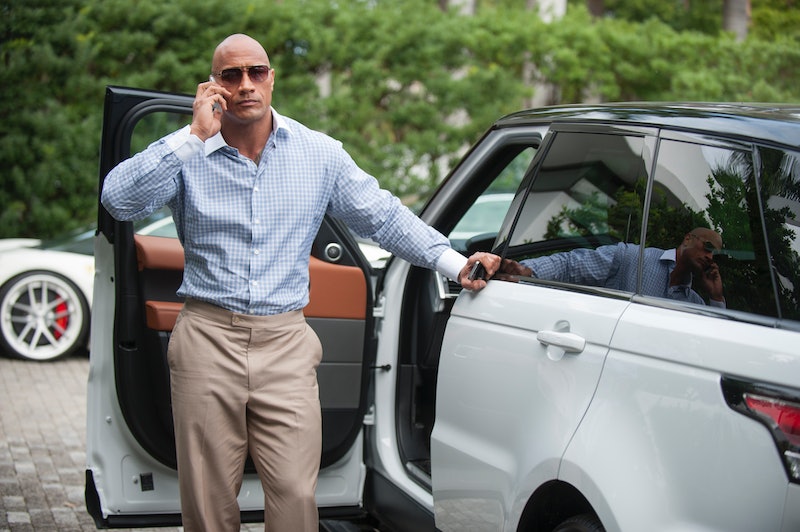 Dwayne "The Rock" Johnson may just be the only actor in the world who can convincingly play a recently retired professional football player. Though audiences have been smelling what The Rock is cooking in movie theaters for years, HBO's Ballers marks the first time Johnson will be bringing his particular set of charms to the small screen since his full-time gig as spandex-wearing, slogan-slinging WWE wrestler. Ballers centers around Johnson playing a retired star lineback for the Miami Dolphins who's spending his newfound time and pre-established fame to get into — you guessed it — financial planning. But is there any truth to the story? Is Johnson's character on Ballers, Spencer Strassmore, a real person?

On the show, Strassmore uses his tailored suits and love of the Miami nightlife to leverage his services to other athletes who know they'll also soon be finding themselves in an occupational transition and need to invest the boatloads of money they made in their athletic career. It makes a lot of sense... so much sense it almost seems like something a real-life retired pro-baller should do with the help of a bookish finance friend, just like Rob Corddry's Ballers character, Joe.

However, that's not exactly the case. Though there are plenty of financial advising firms that focus on pro-athletes making the transition into pro-regular-person, they don't have the assistance of a broad-shouldered success story to put his handsome face on the business — that's pure HBO. But Johnson's character is made up of a number of archetypes you'd recognize from both real life and former Sunday night viewing.

Retired Athletes Staying In Their Field

It's hard to ignore The Rock's own transition from retired pro-wrestler to America's Most Jacked Sweetheart. He's the perfect actor to play a former athlete using his natural charisma and superstar presence to keep a permanent place setting in a he's technically outgrown.

Sure, Vince was working on getting into the prime of his career when Entourage hit HBO, and Spencer will just be exiting his, but it's hard to miss the common thematic thread of excessive superstar behavior the HBO does so well. I'm betting on Strassmore really being more of an Ari though.

OK, I know being a sports agent is different than being a sports financial adviser, and I know Jerry Maguire wasn't a former athlete, and I know there's a difference between a movie and a TV show, but there's just something about a high-powered big wig going from being totally on top to trying to start something new for himself that automatically makes me feel a Maguire-like attachment to Johnson's character in Ballers.

More like this
Prince William Reveals Charlotte's Hidden Talent In Ultimate Proud Dad Moment
By El Hunt
Zooey Deschanel Can't Be Anyone But Herself
By Samantha Leach
Sadie Sink Would Escape Vecna From 'Stranger Things' With This Taylor Swift Song
By Grace Wehniainen
Who Is 'Stranger Things 4' Fan-Favorite Joseph Quinn Dating IRL?
By Grace Wehniainen
Get Even More From Bustle — Sign Up For The Newsletter