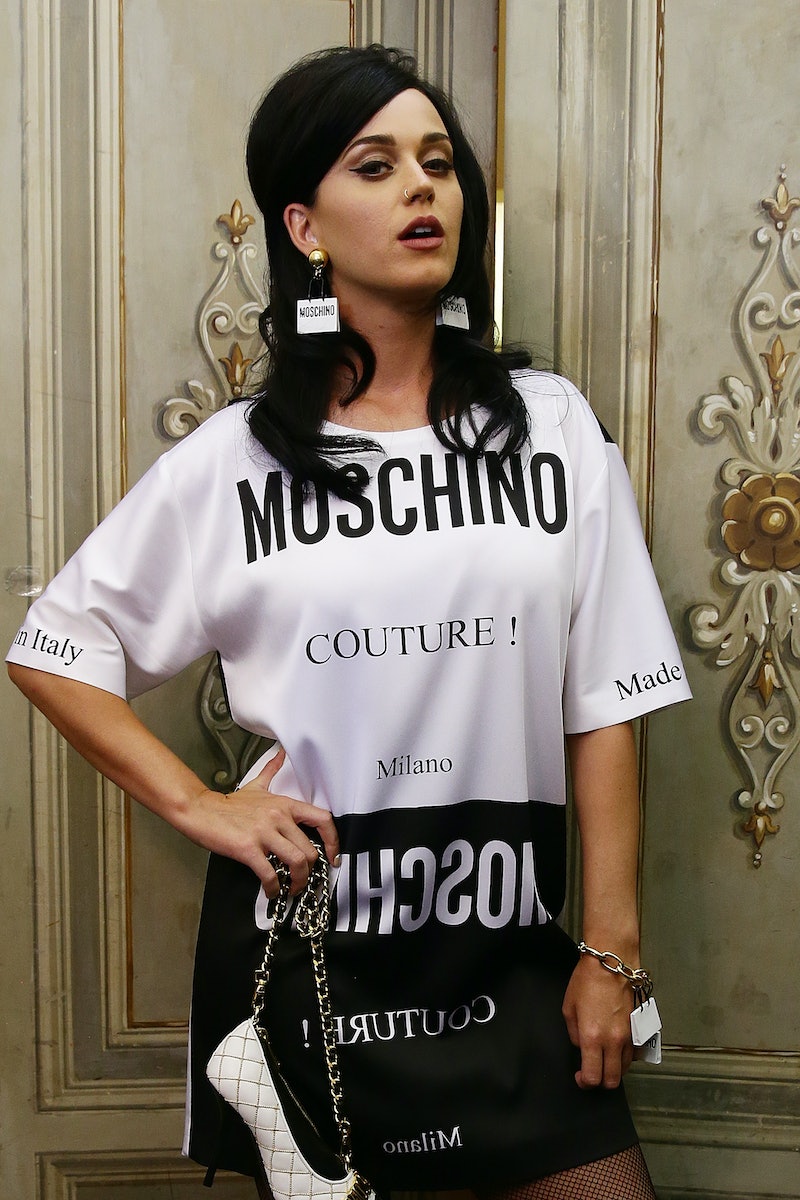 Katy Perry's relationship with Moschino is pretty long-standing, going back to before she was named the face of the edgy, bold fashion brand. Katy Perry wore Moschino at the brand's runway show in Italy this week, donning a black and white ensemble that screamed "MOSCHINO." Literally.

Perry went with a '60s bouffant hairstyle, with loads of volume at the crown a la Amy Winehouse. Her black locks matched her color-blocked outfit, which was not shy about letting it be known exactly who designed it. The "ROAR" singer rocked big, white, logo earrings and a bracelet, a handbag-shaped purse, and black stockings, which sometimes feel so dated to me... except, you know, when they are micro fishnets and when K. Perry wears them with a fab Moschino shirt dress. You can't go wrong there.

Perry was also surrounded by lots of buff, shirt-free men while posing with a pout.

You know, Perry's glamsual Moschino outfit reminds me of the glittery shirt dress she donned when she caught the first show of Britney Spears' Las Vegas residency back in 2013. And as noted, Perry has been circling the Moschino brand for quite some time, walking in all black in a runway show last February, rocking a cute bow in her bob-with-bangs 'do

Let's check out Katy Perry and Moschino now and in the past, shall we?

Blue steel! Perry has the Zoolander pose down.

The ensemble was not fitted but it remained sexy, thanks to the micro fishnets!

Who wouldn't want to wear this?

Ah, the flashback of Katy Perry x Moschino, in black and gold.

She was always destined to model for Moschino.

She so rocks that shirt dress look, right? It's familiar, but not a retread.

I'll leave you with a Katy x Moschino ad.