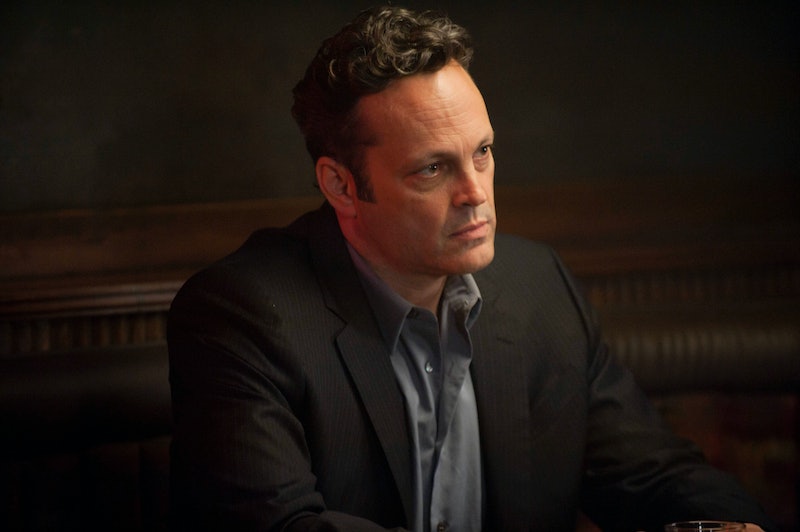 One thing is clear from watching the Season 2 premiere of True Detective : No character is completely good or completely evil yet. And that definitely applies to Vince Vaughn's shady businessman Frank Semyon. It seems as though Frank was once a small-time criminal who worked his way up the ladder and now wants to become more of a legitimate businessman. Frank goes above and beyond to make sure that his name won't end up in the papers when a story is teased about the city of Vinci's corruption and crime by hiring Detective Ray Velcoro, Colin Farrell, to rough the writer up. Clearly Velcoro himself is not the picture of the perfect police officer. He seems to have a drinking problem, has a strained relationship with his family, and uses extreme violence. But why would Ray be on Frank's payroll? The two men seem to share a mysterious past, which could complicate any ideas of one being more good or more evil than the other.

At the beginning of the Season 2 premiere, we see a quick but important flashback to the days when Ray was still working at the sheriff's department after his wife was raped. He walked into a bar to meet Frank, most likely the same bar we later see him in with Frank yet again, and Frank gives him information on the man who supposedly committed the heinous act. The scene occurs after Ray's lawyer asks him if there is anything from his days at the sheriff's department that could hurt him in his upcoming custody battle for his son.

The placement of the scene seems extremely relevant to not only Ray's relationship with Frank, but also these two characters as individuals. Was Ray already on Frank's payroll in his sheriff's days? Is that why he knows Frank so well to the point that he's beating up reporters and Frank is recommending lawyers? Or is it more likely that after his wife's attack, Ray's anger overtook him and he went looking for answers about the attacker wherever he could find them. And his journey took him to Frank, who was probably still a lower-level criminal at the time, and Frank was able to use his connections in the criminal world to find the man suspected of the crime.

The fact that the episode to intercut that flashback with the lawyer asking Ray if anything from the Sheriff's department could hurt him makes me believe that his temper got the best of him, so he sought out the suspect and potentially killed him. If that's the case, then Ray and Frank's connection was made in blood, and it's possible that Ray has been working on Frank's payroll since that moment. The real question will be how long will this loyalty continue as Ray investigates Ben Casper's murder, especially if Frank had something to do with it. We're only one episode into Season 2 of True Detective and already have a ton of questions.