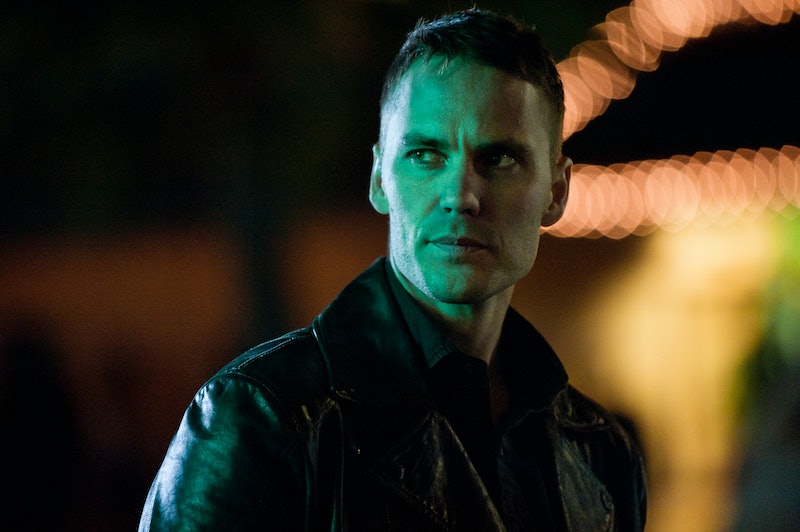 True Detective returned to HBO on June 21, and Nic Pizzolatto's writing isn't the only thing that came back with it. Taylor Kitsch also made a comeback after some time off from acting, and is already at the center of something mysterious. In True Detective Season 2, Kitsch plays Paul Woodrugh, an army vet and Highway Patrol officer (like CHiPs!). Of course, since it's True Detective, he's dealing with some issues, and has what appears to be symptoms of PTSD. In the first episode of the season, he also makes a couple of veiled references to something he calls "Black Mountain." What could Black Mountain mean to True Detective ?

Of course, it wouldn't be the show we fell in love with last summer if True Detective gave away all the details in the first episode. This show likes to take its time, and Black Mountain is only mentioned once or twice in the first episode, so there's not much to go on. Then again, I wouldn't be a real True Detective fan if I didn't comb through what we know for clues and see whether or not they pan out to anything. So, here are some guesses as to what the phrase could mean.

It's Where Stuff Went Down In Afghanistan

It's clear that Woodrugh is still working through some issues he picked up while serving overseas. We don't really know what happened to him there, so Black Mountain could be where he got into some serious trouble, or did something he'd rather not remember. Or, instead of a place, it could be a company or organization that had him do things that still haunt him.

Or It Could Be Closer To Home

Everyone in True Detective seems to be wrapped up in some kind of (definitely crooked) deal to develop the land surrounding a planned high-speed railroad. Black Mountain could be what rises in place of the industrial emptiness of Vinci, Calif. It would be a very True Detective name for a development complex, pairing darkness with a natural, but immovable force.

It's A Real Mountain — Or Several

There's the town of Black Mountain, N.C. There's also Black Mountain in the Adirondacks of New York, as well as the Black Mountain ski resort in New Hampshire. These places are all remote, small towns, which is True Detective's bread and butter. Small towns have lots of dark corners.

It Could Be His Nickname For His, Um, You Know

Granted, based on who he talked to about Black Mountain, this isn't the main meaning behind Black Mountain. But he seems to be having some issues in the sex department, and a confidence-boosting nickname might help. It's sure better than "Woodrugh." (Note: There is endless amusement and enrichment in overanalyzing the names in True Detective.) Though Pizzolatto promised no references or homages in this season of the show, maybe Woodrugh is Hemingway's Jake Barnes from The Sun Also Rises, and the Black Mountain is his Pyrenees.

Oh, Lost. I still haven't forgiven you for some of your cul-de-sacs and narrative dead ends. With only eight, already-written, well defined episodes, let's hope True Detective comes up with something better for its Black Mountain than Lost did for its Black Rock.