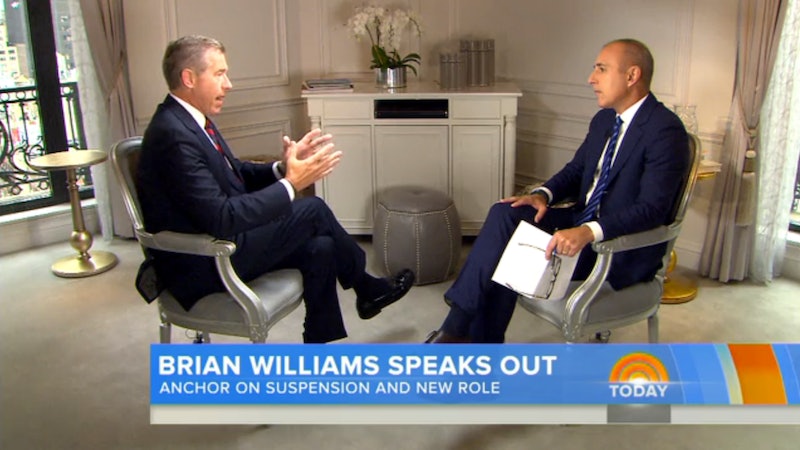 On Friday, NBC aired Brian Williams' first interview since stepping down as anchor of NBC Nightly News in February. Today show host Matt Lauer sat down with Williams to talk about the last five months; what Williams has learned; and what prompted him to tell the now-infamous fabricated Iraq War story. During the candid Q&A, Lauer asked Williams some hard-hitting questions, but not nearly enough of them. There are many important questions Lauer should have asked Williams, and if the former anchor really is contrite and genuinely wants to clear the air with the public, then Williams owes us the answers.

To be fair, the interview was certainly not a cakewalk for Williams. Lauer did ask some questions that made him squirm, such as "did you know when you went on Nightly News that you were telling a story that was not true?" Williams, who's consistently said that he never intentionally lied — that he conflated the aircraft, and that he made a mistake in his recollection — answered, "No." Lauer then challenged Williams' explanation by asking, "Did you give thought at the time to going on air and saying, 'I lied'?" Again, Williams maintained that "that's not what happened."

Overall, the interview, though candid, left a lot to be desired in terms of redeeming Williams in the public's eye and rebuilding its trust in him. When Lauer asked him whether he'd like to take the opportunity to set the record straight about any other stories he's fabricated over the years, Williams skirts the issue and basically passes on the chance. Lauer does not follow up or press him.

Perhaps it's because Lauer and Williams are network colleagues and a contractual stipulation inhibited Lauer from asking the really tough questions, but here's what he should have asked Williams to really clear the air.