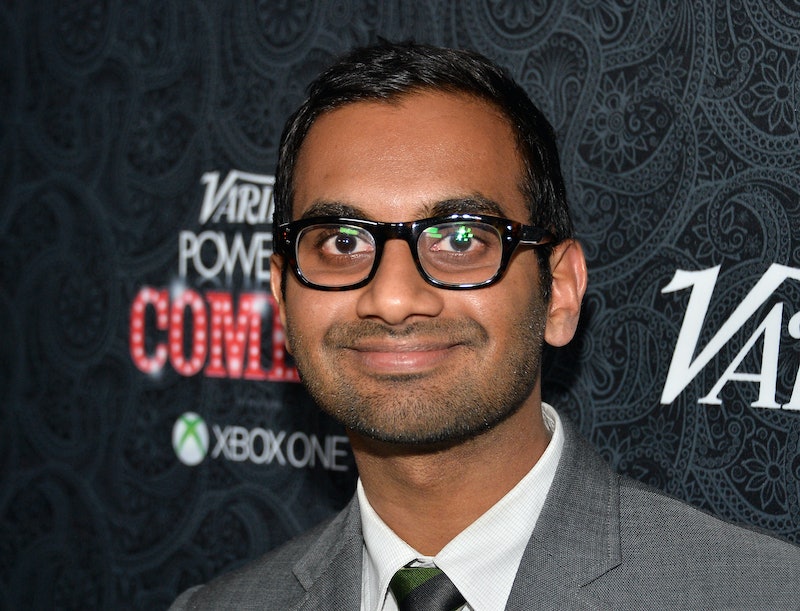 Aziz Ansari knows a thing or two about modern romance. Aside from the fact that he recently published a book on that very topic — and with that very title: Modern Romance — he's involved in a relationship of his own! Aziz Ansari has been dating Courtney McBroom for quite some time now, and it really seems like he's found someone special in her. He may be a comedian, but his smitten feelings about the pastry chef are definitely no laughing matter.

From talking about her in his standup to writing about her in essays and speaking about her in interviews, it is clear that Ansari is quite taken with McBroom. And judging by the fact that she has all but moved in with him in Los Angeles, it is safe to say that the feeling is mutual. Considering that Ansari has been quite open about his fascination with dating especially in the age of the Internet and the ubiquity of text messaging and Tinder, it is really sweet to see that he has found someone with whom he had a true connection. So, in celebration of the funny man finding love, here is a roundup of some of the cutest things Ansari has said about his girlfriend.

"In the case of my girlfriend, I initially saw her face somewhere and approached her. I didn’t have an in-depth profile to peruse or a fancy algorithm. I just had her face, and we started talking and it worked out," he wrote in an essay for Time.

2. On Investing In Her

"I found out about four different couples that had broken up, supposedly because they didn’t feel like they had the love that was expressed in those vows. Did they call it off too early, at their danger point? I don’t know, but I, too, felt scared hearing that stuff. Did I have what those people had? At that point, no. But for some reason, I felt deep down that I should keep investing in my relationship — as my father did, after those fateful 30 minutes of literally sizing up my mother — and that eventually that level of love would show itself. And so far, it has," he continued in that same essay for Time.

3. On Knowing She Was Worth It

"I didn't want to stop hanging out with her. We just kept hanging out. There was a time I thought, how come I'm not meeting someone I want to be with? But with her, I just wanted to hang out," he said in an interview with USA Today.

"There's a story I tell in the book, how at my one-year anniversary, my girlfriend gave me this book that like had all of the text messages we had ever sent to each other. And in some of the beginning ones she made little notes about what was going on in her head and stuff, saying, like 'Oh, I was really nervous here, because I said this and I thought it had offended you,' and I was like, 'Wow, that's so funny, because I remember sending the message afterwards and being really nervous about it.' And you end up realizing you're so worried about this, and the other person is probably worried as well. We're all in the same boat together," he said in an open discussion with several journalists.

5. On What He Learned From Her

"My girlfriend has influence on me. She's a big feminist. That made me think about those kinds of issues. I'm a feminist as well," he said in an interview with David Letterman.

“I’ve kind of settled down. I was the guy eating Skittles and having lots of fun, and then I was like, ‘I need a nice nutritious salad’ — she’s the salad," he said to Billboard.

Hopefully we'll get to hear more sweet quotes from him soon about his special lady friend. It certainly wouldn't be surprising if we did!