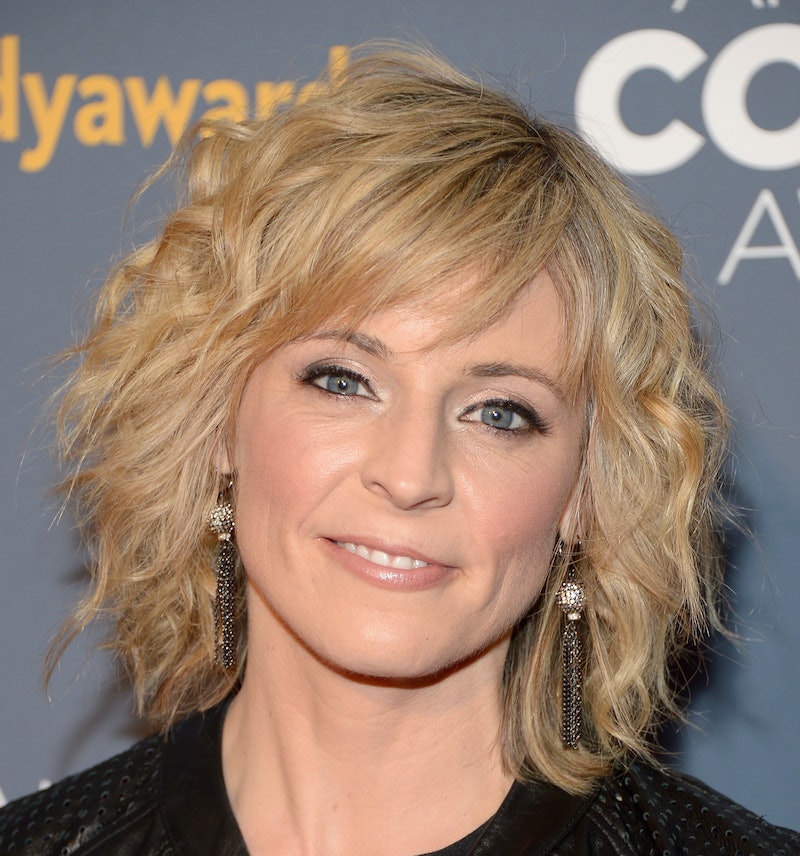 Women in comedy (see: Amy Schumer) are killing it right now, thanks not only to their individual brilliance, but also to the trailblazers who have come before. Finally, the industry is catching up with what we've always known about these hilarious ladies. And as the cherry on top: Netflix announced that Maria Bamford will star in a new series from Arrested Development's Mitch Hurwitz. Yes, folks. Your new-old favorite is getting her moment in the sun. The show, Lady Dynamite, is a single-camera half-hour comedy based on what Bamford describes as "her life." According to The Hollywood Reporter, "The occasionally surreal episodes, refracted across multiple periods inspired by her life, tell the story of a woman who — and then finds — her shit."

In case you're a wee bit foggy on this funny lady, Bamford has been slaying the comedy game for years, coming up through the club scene of the early nineties with comedians like Louis CK and Marc Maron. It's her raw emotional honesty, sharp jokes, and the fact that she was playing with the big boys since the early nineties that make her the foremother of comedy today.

Every time Amy does one of her character voices in stand-up like the Sexy Cuban Man Cesar, she's paying homage to that Bamfordism. And when comedians like Marc Maron talks candidly about Bipolar Disorder, it's because Bamford paved the way to make comedy as honest as it is hilarious.

In fact, here are the things about Bamford you need to know while you're waiting for Netflix to finish making her show:

She integrates character voices into her stand-up, performing as many different people for the price of one.

She's Honest About Her OCD

Bamford's material often comes from her struggles with OCD, her experiences with therapists, and how people react to her symptoms.

In this hilarious bit about the celebrity chef, Bamford calls out Deen's ridiculous love of butter in gargantuan, heart-clogging proportions: "her recipes are like a suicide note."

Her willingness to be honest and "go there" with her comedy helps people who are suffering feel like they are not alone.

She's Worked with Mitch Hurwitz and Netflix Before

She guest starred as Tobias Fünke's love interest (and Sue Storm in his Fantastic Four musical) in Season 4 of Arrested Development.

She Supports the Troops

Her comedy resonates with anyone who has ever had a mom. She talks about her religious mother, who she often impersonates in bits; she has a hilarious web series called "Ask My Mom."

She Filmed a Special in Her Parents' Living Room

The "Special Special Special!" is one of the most hilarious standup sets of all time. Performing for an audience of just her parents, and taking a break mid-show to take cookies out of the oven, it is a perfect hour of absurd humor.

Clearly, her show is going to be amazing.

More like this
Jurnee Smollett’s Heart Is Healing
By Rebecca Carroll
Why Sadie Sink Is Hopeful Max Will Return In Stranger Things Season 5
By Brad Witter
'Stranger Things' Star David Harbour Has This Actor In Mind For A Hopper Spinoff
By Alyssa Lapid
What Working At Marvel Is Really Like, According To A 'Ms. Marvel' Co-Creator
By Gretchen Smail
Get Even More From Bustle — Sign Up For The Newsletter