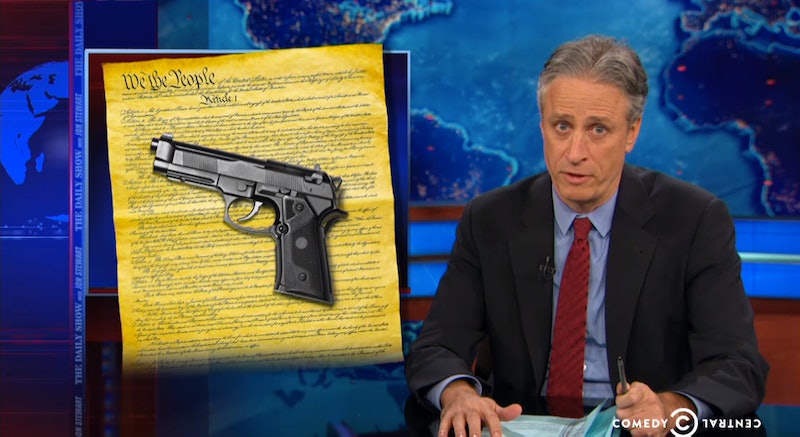 On Thursday night's episode of The Daily Show, Jon Stewart addressed the Emanuel AME Church shooting, putting aside his usual jokes and delivering a somber, heartbreaking monologue. In expressing his utter sadness over the shooting, Stewart also addressed America's "gaping racial wound" that so many refuse to acknowledge and the country's obsession with combating foreign terrorists when its own people are inflicting devastating violence on each other. Though Stewart avoided going into gun politics, his speech said everything that needs to be said about America's gun culture. And this isn't the first time Stewart has imparted keen insight on the subject.

Though Stewart never directly talks about gun control during his monologue, he still sends a powerful and clear message about it by addressing our priorities when it comes to protecting Americans.

I don’t want to get into the political argument of the guns and things. What blows my mind is the disparity of response between when we think people that are foreign are going to kill us and us killing ourselves. If this had been what we thought is Islamic terrorism, it would fit into our — we invaded two countries and spent trillions of dollars and thousands of American lives, and now fly unmanned death machines over five or six different countries, all to keep Americans safe. "We’ve got to do whatever we can. We’ll torture people. We’ve got to do whatever we can to keep Americans safe."

Stewart aptly points out the hypocrisy in putting every effort into fighting the threat of terrorism on American soil while refusing to deal with the violence that's already happening on it every day via people's access to guns.

Stewart has touched upon the subject of gun violence before, and in the past he's been much more explicit. Here are five times that Stewart said everything we need to hear about gun control.

In January 2013, after the horrific Sandy Hook shooting, many angry parents and politicians blamed violent video games for the mass shooting. Stewart joined the discussion and offered the very good point that you can't just make violent games and entertainment the scapegoat without also addressing how to actually regulate the guns that do the killing.

In April 2014, The Daily Show featured a segment that satirically called the shooters the real victims of gun violence. The segment showed the many ways that gun rights advocates and Republican politicians are implementing legal services to protect someone after they've shot another human being. As funny as the episode is, it's also terrifying to know that these services actually exist.

In May 2014, Stewart exhibited the ridiculous reasoning gun rights advocates use to oppose gun control. For example, sending a gun retailer death threats for selling a "smart gun" that prevents anyone other than the owner from firing it, which gun rights advocates say is a threat to the Second Amendment.

What kind of gun is a threat to the Second Amendment? A gun that shoots other guns?

Keep Gun And Carry On

Last June, Stewart took on the Open Carry law and pointed out how absurd it is for people to carry large weapons into places like Chili's and the Golden Corral. He also talked about the NRA's support of both Open Carry and Stand Your Ground, which says you can use deadly force if you're threatened.

According to the NRA's basic principles, you have a right to carry a weapon that may cause a reasonable person to believe they are in danger of great bodily injury. And they have a right, if they feel that way, to respond with deadly force. It's a perpetual violence machine.

This March, The Daily Show's Jordan Klepper went to Florida to report on a very disturbing Florida gun law. Governor Rick Scott signed into legislation a law that prohibits doctors from asking whether patients own guns and therefore cannot discuss things like gun safety for children with parents.