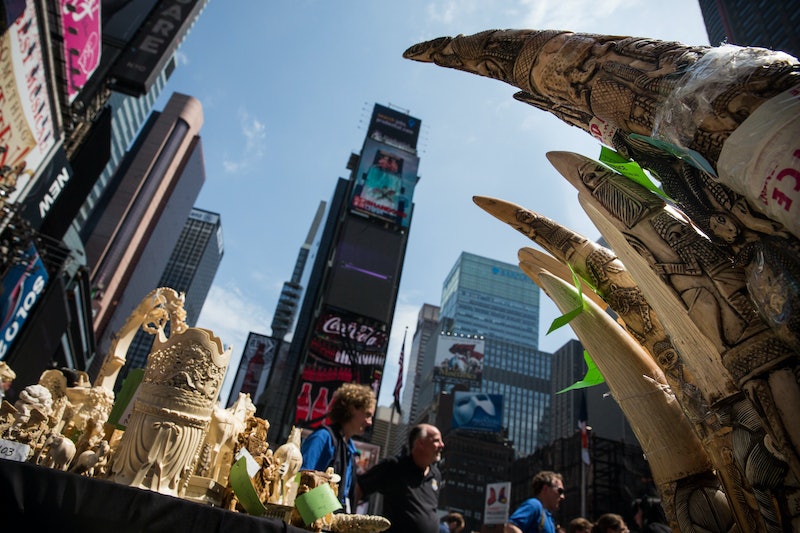 The U.S. Federal Fish and Wildlife Service sounds like a bunch of friendly camp counselors to me. Like, oh, going on a nature hike with my friends from the FWS, won't it be the best?! But on Friday, the government agency smashed one ton of ivory in the middle of Times Square, making it clear that not only do they love nature, but they'll go to badass lengths to defend it.

Crowds watched as a truck usually used to crush rocks turned the ivory to dust, the public destruction intended to signal a harsh crackdown of the illegal ivory trade. Most of the ivory, which was carved into trinkets, came from a single seizure.

According to activists, an elephant is killed for its tusk every 15 minutes, which means that Africa's elephants are dying at a faster rate than they can reproduce. Carter Roberts, president and CEO of the World Wildlife Fund, praised the demonstration in a statement.

Today the United States sent a strong message that it will not tolerate wildlife crime. For Africa’s vanishing elephants, these are the most desperate of times and more needs to be done. Just last month, China – another major consumer market for wildlife products – announced it would end its ivory trade. The US must do the same, urgently.

Popular Science points out that this isn't the first ivory crash. In 2013 the government crushed six tons of ivory in Boulder, Colorado. Secretary of the Interior Sally Jewell joined the activists, celebrities and onlookers in Times Square on Friday. She told the Associated Press that the event would help stop "the bloody ivory market."