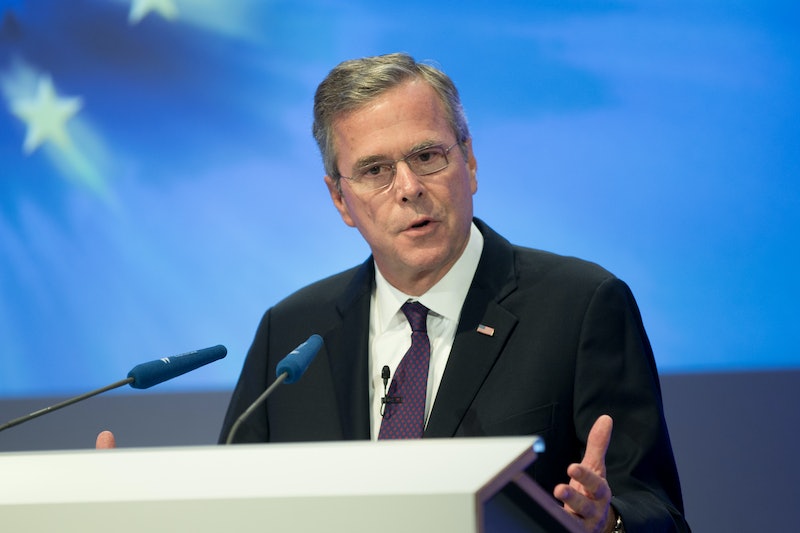 Even though Dylann Roof, the 21-year-old man who, according to law enforcement, has confessed to killing nine people in Charleston, South Carolina, and allegedly told witnesses he came to the Emanuel African Methodist Episcopal Church "to shoot black people," 2016 Republican presidential candidate and former Florida Gov. Jeb Bush won't say racism motivated the shooting. Bush was one of a few Republican presidential candidates who cancelled their campaign events in Charleston. So far, Bush has been relatively quiet about the shooting except for when he shared his condolences with the victim's families.

When a reporter for the Huffington Post asked Bush what he thought motivated Roof to kill nine people, Bush said, "I don't know what was on the mind or the heart of the man who committed these atrocious crimes." Later, when the Huffington Post penned a story about how Bush refused to attribute the attacks to racism against black people, Bush's spokesman, Tim Miller, responded to the criticism on Twitter and said that "of course" Bush believes the attack was racially motivated. The Huffington Post spoke with Bush again Friday and asked him whether he thought the crime was racially motivated.

His answer still skirts the issue and he refuses to say that hatred against black people fueled the murders:

It was a horrific act and I don't know what the background of it is, but it was an act of hatred. Bush was again asked whether he thought the crime was motivated by race, and he said: I don't know. Looks like to me it was, but we'll find out all the information. It's clear it was an act of raw hatred, for sure. Nine people lost their lives, and they were African-American. You can judge what it is.

Maybe Bush hasn't been reading the news, but there are photos circulating the Internet of Roof wearing the flags of two apartheid-era African countries, Rhodesia and South Africa, both of which were ruled by white minorities until 1980 and 1994 respectively. Further, when one of the nine victims pleaded with Roof not to shoot anyone, Roof responded, "No, you've raped our women, and you are taking over the country...I have to do what I have to do," according to CNN. Witnesses say he then shot the man.

I find it really hard to believe that a potential presidential candidate wouldn't know that the Charleston shooting is the most recent tragedy sparking conversations about racialized violence across the country. The FBI has already said it is investigating the crime as a hate crime, so why is Bush so reluctant to call it what it horrifyingly is? By refusing to admit that racism is still rampant across the South and that it — both consciously and subconsciously — is the motivation for violence against black people, Bush seems to be ignoring the issue.

Yes, it's shameful and it gives us a sick feeling in our stomach to try to justify why the South is so staunch about flying confederate flags, for example, but it's a problem that doesn't get better when we ignore it. Further, Bush canceled his campaign event in Charleston and shared his condolences on Twitter. But rather than distance himself from the issue, would it not have been a better symbol to go there and voice outrage for the act while showing physical support for the community?

Bush has called for people to unite through their faith in God. According to Talking Points Memo, he gave a speech at the Faith & Freedom Coalition about the shooting and said, "They were praying. They were learning and studying the word of the Lord." But they were also black, and painting the victims only as Christians and not as people who have continually suffered violence at the hands of white people is downplaying the tragedy so that we can feel better about the state of racism in the U.S.