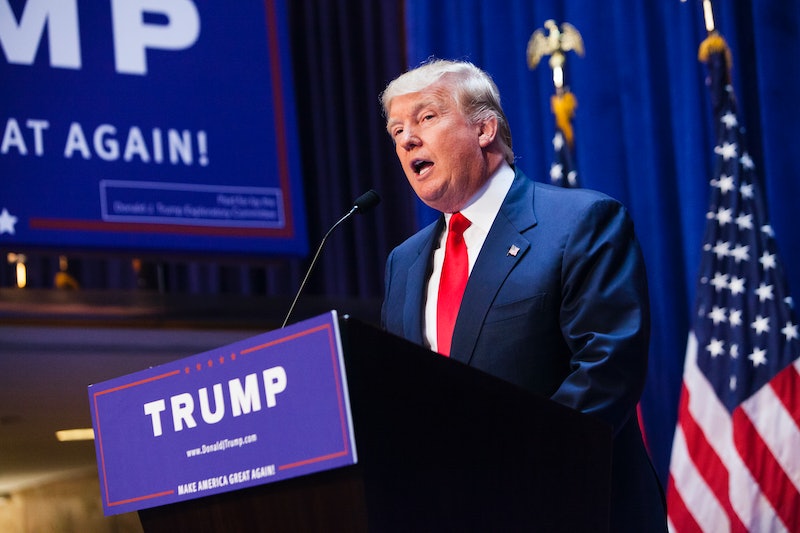 Billionaire businessman Donald Trump officially launched his bid for the 2016 presidential race on Tuesday, giving a bizarre speech littered with questionable policy stances and plenty of "Oh my god, did he actually say that" moments. Trump, perhaps better known for his unusual behavior and flair for the egotistical over his actual accomplishments, has publicly declared his intentions before, of course. But this time — he totally pinky-swears it — he's for real. Naturally, it only took hours before a handful of late night hosts laid into The Donald for both his peculiar speech and his flat-lined zingers.

It's not as if they hadn't already laid the ground work, of course. In early June, The Tonight Show host Jimmy Fallon laundry-listed a bevy of pros and cons in the event that Trump really did decide to kickstart a GOP White House bid.

"Pro: He's received thousands of letters and phone calls urging him to enter the race," joked Fallon. "Con: They were all from Hillary Clinton."

Fallon then quipped that while Trump had bragged about having a plan to defeat the militant terrorist group ISIS, he unfortunately believed that ISIS was "actually one of the Real Housewives" he had fired from his show, Celebrity Apprentice.

Since Trump's official announcement, the wisp-haired mogul's impassioned (yet slightly incoherent) speech has provided plenty of comedic fodder for the roster of late-night comedic hosts all looking to celebrate the unintentionally hilarious situation. And with direct lines from Trump's own speech like, "I have so many Web sites, I have them all over the place — I hire people, they do a Web site ... It costs me $3 ... $5 billion Web site", how could anyone resist the temptation?

Here are some of the best reactions so far:

"America's id is running for president," joked an overexcited Stewart on Tuesday night. "Trump is the part of your brain that, at 3 a.m., is like, 'Let’s go take a [expletive] in a mailbox.'"

The Daily Show host then played a round up of Trump's self-declared "best qualities" — which included, of course, the fact that he's uber-rich and has "a total net worth of $8 billion ... NET worth, not assets!" — and declared, highlighting a speck of saliva in one of the speech stills,

His speech was so f---ed up that, in the middle of it, all the liquid in his body tried to escape through the corner of his mouth!

Stewart, being the maniacally persistent comedian he is, didn't just tick off the box and let Trump be — he also extended the melee into Wednesday night as well. After feigning dramatic detachment from a discussion over the Trans-Pacific Partnership bill currently being lobbied in Congress, he pulled out a bizarre-looking contraption meant that would release various Trumpisms at the press of a button, joking,

I'm going through withdrawal -- I need me some Donald.

The late-night Comedy Central host opened a small, bow-adorned box with a video of Trump’s speech inside, playing the business mogul’s announcement.

Oh my god! How did you know, Comedy Gods?! I’ve got a show and Trump’s running for president? Whew! Good news for me — horrible news for our writers, because all the jokes are officially writing themselves.

“Okay, so [according to Donald], the real threat from ISIS is [that] they’re entering into the hospitality industry,” added Wilmore after playing back a clip of Trump saying he was in “competition” with the militant terrorist group, which Trump said recently provided the financial backing for a hotel in Syria.

Earlier this week, comedian and late-night host Jimmy Kimmel joked that Trump was essentially "a president and an amusement park all rolled into one." On Friday, Kimmel released an "exclusive interview" with Trump's "brother", Gordon Trump — who, naturally, insisted that everyone call him "The Gordo".

"You know, I stay pretty busy running my incredibly successful, highly lucrative, blue chip chain of fro-yo stores," said The Gordo, insisting that he had created the word "fro-yo".

Kimmel also said that Trump had created likely the most demoralizing slogan ever: "The American dream is dead." Zing!

"When you do comedy for a living, there are some days where you just don't know what to talk about," said comedian and Saturday Night Live alum Seth Meyers on Tuesday, before playing a video of Trump announcing his candidacy. He added,

In a speech cobbled together from forwarded emails from your uncle, [Trump] let us know what he thought America needed.

Not satisfied with a simple verbal lashing, Meyers compared Trump's idea to build a giant wall across the U.S. southern border to HBO's hit show, Game of Thrones.

I'm not sure about president, but I do know a recently vacated position that could use a man with your kind of thinking, in regards to walls.

In the spirit of kookiness, the always adorable Cordon opted for a game-show parody based on Trump's own speech quotes. The hilarious "Trump Stumpers" asked contestants to determine whether disparaging quotes about selling luxury apartments to Chinese people or building a huge southern wall were true or false:

Did you just see presidential candidate Donald Trump say that, true or false?

No ... I mean, they can do a lot with CGI now. Like, I just saw the new Jurassic World this weekend, and they had a big-ass shark-dinosaur, and that was way more believable than this.

You can't make this stuff up.

Last, but certainly not least: the epic comedy genius, his royal highness Stephen Colbert even graced fans with his presence, despite the fact that he's not set to take over CBS' The Late Show until later this year. Dressed in his own "Trump-esque" get-up and standing behind a podium that read "Shut Up, Dummy!", Colbert (in an obvious parody of The Donald's own speech on Tuesday) said,

This will be the finest, most luxurious, gold-plated, diamond-encrusted campaign, that will give hope to a weary nation ... until together, we reach that fine, fall day when the new season of Celebrity Apprentice premiers.

The best part of the speech? That incredible hair. Obviously.

More like this
Police Shove 'Full House' Star Jodie Sweetin At An Abortion Rights Protest
By Radhika Menon
For These Abortion Clinic Volunteers, Going TikTok Viral Is A Risk Worth Taking
By Audra Heinrichs
YouTuber Runs Into Margaret Sanger’s Grandson While Filming
By Alexis Morillo
Every Single Big & Small Way You Can Fight For Abortion Rights
By Tess Garcia
Get Even More From Bustle — Sign Up For The Newsletter