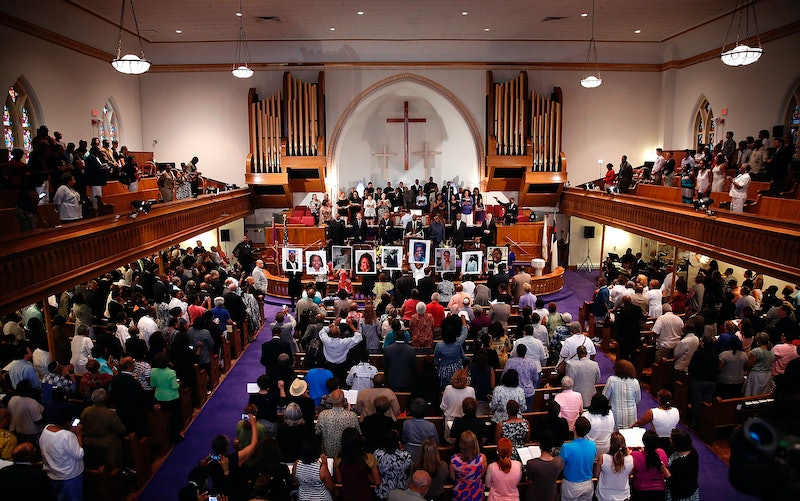 Throughout America and across the world, countless people have been following the grisly tragedy that took place in South Carolina. There, at the historically black Emanuel African Methodist Episcopal Church in Charleston, nine people were slain, all of them black, allegedly by a 21-year-old apparent racist and white supremacist. And yet, as some relatives of the Charleston victims forgave Dylann Roof for his alleged crimes, should we all be focusing on him a little less?

To be clear, there are some undeniably incredibly important issues raised by the Charleston shooting, ones that seem to go chronically undiscussed. It's been evidenced, frankly, by the awkward reluctance of many elected officials to speak plainly about the apparent nature of the crime. According to CNN, law enforcement sources say Roof confessed to the crime and expressed his intentions to spark a race war.

Moreover, now a wildly racist explanatory manifesto has been discovered online that is supposedly authored by Roof. Suffice it to say, this appears to be a story about violent anti-black racism in America, and that's a story that goes back hundreds of years. One that many white Americans are frankly far too reticent to tell, leaving it to black communities to endure oft-unspoken trauma.

But as far as Dylann Roof himself is concerned, the man who now stands accused and charged with nine counts of murder — is it necessary to fixate all our attention on this single person, drilling down into his thoughts, motives and worldview?

For a court of law, obviously, it's very important. But for anyone concerned by the circumstances that helped facilitate this awful story, the necessary discussions go far past a lone, disgruntled gunman. It probably requires conversation about why some people can listen to their friends make a bunch of racist jokes and not take it seriously, for example. Or why some people instinctively seek to deny racism's role in modern society, whether it's covert or overt.

Or, of course, the kinds of people who defend an emblem of an explicitly racist rebellion as a source of pride. To say nothing, obviously, of the politicians who lend their voices in support of that emblem — the Confederate flag still flies in front of the South Carolina statehouse, after all, and a number of GOP candidates for president in 2016 continue to support it, like Mike Huckabee and Lindsey Graham.

Basically, you don't have to forgive Dylann Roof, the way some of the Charleston victims' families told him they have. That might be too high a bar to clear for the average person, even as many people close to the incident have found a way.

But you shouldn't spend all your attention on this story solely of Roof himself — think about how you can help confront or challenge racism in your own life, or at the very least, remember the victims in equal measure.