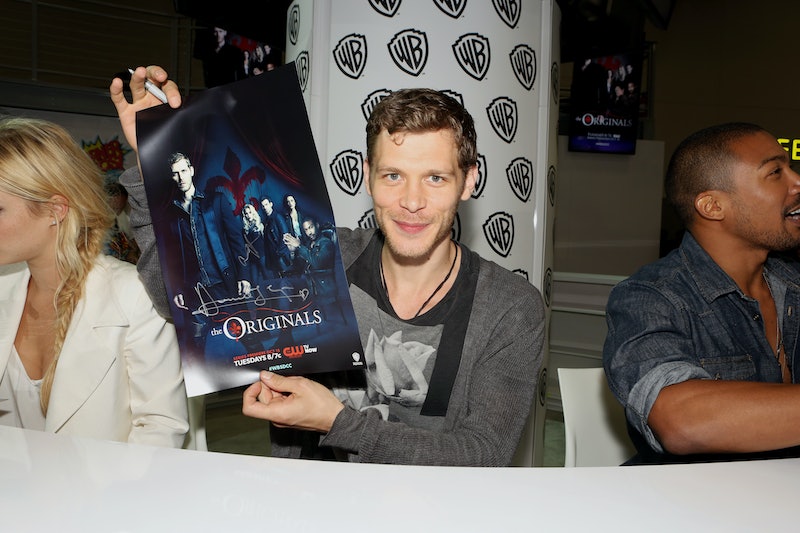 Klaus Mikaelson is coming back to Mystic Falls! Yes, it sounds too good to be true, but according to TVGuide.com it is, in fact, true, so start celebrating. The star of the CW's new hit show The Originals is returning to the show that started it all, The Vampire Diaries, sometime in its future fifth season. Before the debut season of his new show aired on the CW, Joseph Morgan (who played big baddie Klaus) was excited about his TVD exit and the prospect of a crossover, and now the confirmation is finally here to quell the sadness that's plaguing Klaus fans who tune in every week to The Vampire Diaries. But why will Klaus return?

We hope it's for Caroline.

Two weeks ago, Tyler finally broke it off with the chatty, blonde vampire so he could head down to New Orleans to take on Klaus. Naturally, Caroline was devastated because, like Klaus told us right before his exit from TVD last season, he's her first love. So the time is ripe for Klaus to return and sweep her off of her feet like he promised! Though Caroline (Caroline Accola) didn't seem too confident that the two will end up together, there's still hope. And we sincerely hope he'll be back for her because watching Caroline pine over Tyler and Elena who continue to be torn between the Salvatore brothers is getting boring as hell.

So! Without further ado, here are five reasons why Caroline and Klaus's relationship would be the best thing to happen to The Vampire Diaries:

KLAUS IS IN IT FOR FOREVER

He may have a new hybrid baby on the way, but he made a bold and hopelessly romantic claim at the end of last season and I have a feeling he'll keep his word on this one. Also, if this means we'll get some beautifully romantic dialogue to rival The Notebook, I can't see anyone complaining about a guy with Ryan Gosling's charm AND a swoon-worthy accent.

CAROLINE BRINGS OUT HIS SOFT SPOT

Klaus doesn't care about anyone, we know that and we've seen physical evidence 1000 times over. No one, not even his siblings or his unborn child can break his hard exterior, but Caroline can. Klaus saved her life on her birthday and they shared this tender moment (I don't think Klaus has ever embraced another human or vampire on the show before or since). She brings out the best in his humanity, plain and simple, and it'll be interesting to see how he struggles with that.

HE WANTS TO CHANGE HER LIFE

Does this sound vaguely familiar to you? (Cough, Aladdin about to sing "A Whole New World".) Unlike Tyler, who has always been all about himself, his drama, and charging away on martyr quests, Klaus wants to take Caroline with him everywhere. He's got about 10 centuries' worth of time on the rest of us so he probably knows the ins and outs of a romantic vacation around the world. Again— the words, the voice, the accent — we're sold on hearing lines like this for a long time.

No man gets left behind, no love gets left behind. Maybe that's why he'll be back, to assure Caroline that she's still the one and that he'll never leave her again (not even to go to New Orleans). A Caroline crossover on The Originals? We're definitely interested in that, too.

WE CAN TOTALLY SEE THIS LEVEL OF ROMANCE

Klaus is old and old-fashioned. Titanic-y courtship and romance is exactly what I can see Klaus using to mend the heart of a hopeless romantic. Maybe he'll even paint her "like one of his French girls." He's charming like Jack and she's resistant but needs to break away from her heartache, just like Rose did. It will be a love story for the ages.

Bonus points if he comes up with something like this upon return: