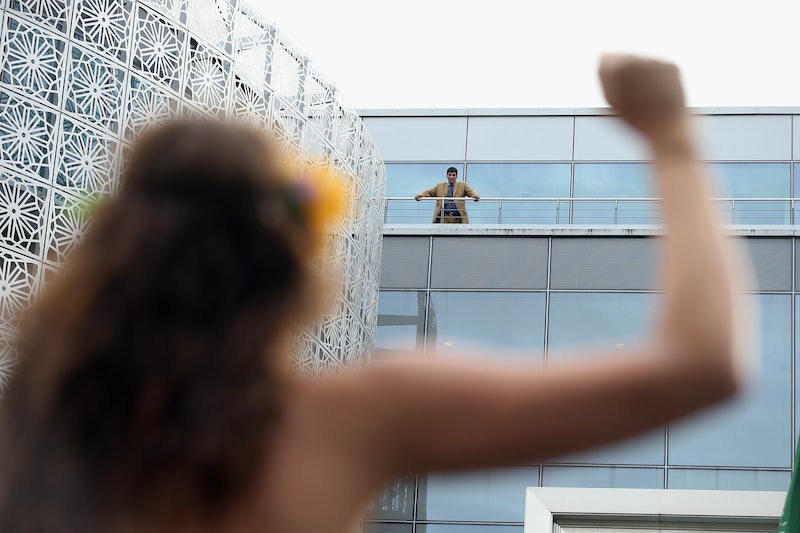 The Free The Nipple movement has come a long way since the December 2014 release of Lina Esco's film Free the Nipple, and with summer just beginning, men and women around the world are increasingly supporting it. Free The Nipple's mission is to secure the same social privileges that men enjoy for women, specifically advocating for women's right to go topless in public. Public toplessness is explicitly illegal for women in only three out of 50 states, yet across the country, women can face jail time and large fines. For fighting this injustice, Free The Nipple has become a feminist essential as it protests a culture bent on sexualizing women's bodies without their consent and also empowers women with the long-denied bodily autonomy that men have enjoyed for decades now. This summer, with Free The Nipple protests rising both in frequency and in the media's attention, the movement has become more critical than ever.

On Thursday, the Association of Libertarian Feminists (ALF) launched a petition against Facebook's censorship of the female nipple, directly addressed to Facebook CEO Mark Zuckerberg. The ALF posted a link to an article covering a recent Free The Nipple gathering in Iceland on its page; the post was removed for violating Facebook's community guidelines regarding nudity. The ALF created the petition to protest the policies that saw their post removed. "Facebook is exercising a double standard, allowing photos of topless men but censoring artful or political expressions of female bodies," the petition overview stated on its page.

By maintaining these misogynistic standards, Facebook is presenting the female anatomy as perverted, pornographic, and something that women should hide and be ashamed of. That's why ALF's petition makes valid points. It reminds us that while posted content that depicts graphic violence toward women and content that glorifies rape do not violate community standards, "Facebook regularly deletes artful expressions of women's bodies and content associated with the #FreetheNipple movement," the petition overview asserts. As of Sunday afternoon, although the petition has cleared an impressive 11,000 signatures, Zuckerberg has yet to make a comment.

This petition was not even the first Free The Nipple protest directly addressing Zuckerberg. Eloise Bouton, the French author of Confession d'une ex-Femen, wrote a letter published on the World Post (a partner of the Huffington Post) to the Facebook CEO in March this year. Bouton particularly protested the removal of a poster of Pauline Delpech in 2012, which was meant to encourage breast cancer screenings.

The link Facebook removed from ALF's page, which set off the launch of the ALF's petition, was an article from the website Iceland Monitor covering a significant Free The Nipple gathering in Iceland. On June 13, women assembled at Austurvöllur Square with the goal of "[desexualizing] the female nipple." Supporters lounged under the sun, topless or clad in T-shirts supporting the campaign, to welcome the warmth of the summer season and take photos with friends. The protest's organizers, Kar­en Björk Eyþórs­dótt­ir and Guðbjörg Ríkey Thorodd­sen Hauks­dótt­ir, told Iceland Monitor:

Some are shy to go topless, but there's no pressure to go topless. That's why we're selling the T-shirts, so that people can support the cause without going topless.

At all Free The Nipple protests, you're bound to encounter a mix of women baring their nipples and women either donning shirts or pasties, and this mix reflects exactly what the movement stands for: Women being allowed to make their own bodily decisions based on their individual levels of comfort. It's important that women who conceal their breasts do so because they want to, and not because they feel pressured to for societal acceptance and safety. "We hope that it's something women can do on all warm summer days," the protest's organizers told Iceland Monitor. "We hope that it will become the norm."

Earlier this year, Free The Nipple made an impressive stride toward becoming a "norm" by finally staking its place on a college campus. At the end of May, male and female students at the University of California, San Diego (UCSD) led a topless protest for gender equality. Free The Nipple's relevance to college campuses should come as no surprise, as an estimated one in five female college students will be a rape victim, according to the National Sexual Violence Resource Center. Movements fighting rape culture, or society's tendency to blame female rape victims based on their dress or any flirtatious behavior prior to being raped, have picked up since Columbia University student Emma Sulkowicz's famous mattress performance. As a movement against sexualizing women's bodies without their consent and shaming women for what they choose to show, Free The Nipple has unsurprisingly become popular among college feminists in their crusade against rape culture.

The movement's increasing momentum on and off campuses can also be attributed to its support from several influential figures, which has helped it rise from a "cowardly social fad" to an issue that is impossible to ignore. Miley Cyrus has been one of Free The Nipple's loudest activists since December 2014, when she posted numerous pictures of her face pasted over the bodies of Free The Nipple protesters to her Instagram. In May, she was joined by fellow artist Tove Lo, who flashed a Boston audience to demonstrate her support for the movement. However, one of Free The Nipple's most impressive supporters is not a celebrity, but a 17-year-old activist from Southern California who contacted Free the Nipple's Lina Esco for help staging a topless Venice Beach protest, which attracted wide numbers of female high school and college students. The involvement of female youth against current societal perceptions of their bodies is definitely something to be optimistic about.

Ultimately, the reach and importance of Free The Nipple do not come from any one single activist or protest, and the movement has become more critical not just because women shouldn't have to suffer discomfort in the heat waves to come this season. It's a societal discussion about respect and female sexuality that is long overdue. As a society, we need to make clear distinctions between right and wrong when it comes to our perceptions and treatment of women and their bodies. We need to respect women who wish to sexually empower themselves, but we also need to understand it's wrong to sexualize a woman's body without her consent. We need to learn it's not OK to sexually objectify the female body, but it's also not OK to repress it. It's time for the female anatomy to no longer be viewed as pornography, but as the natural human thing that it is. Until all of these issues are resolved, Free The Nipple will remain among the most important modern women's rights issues.