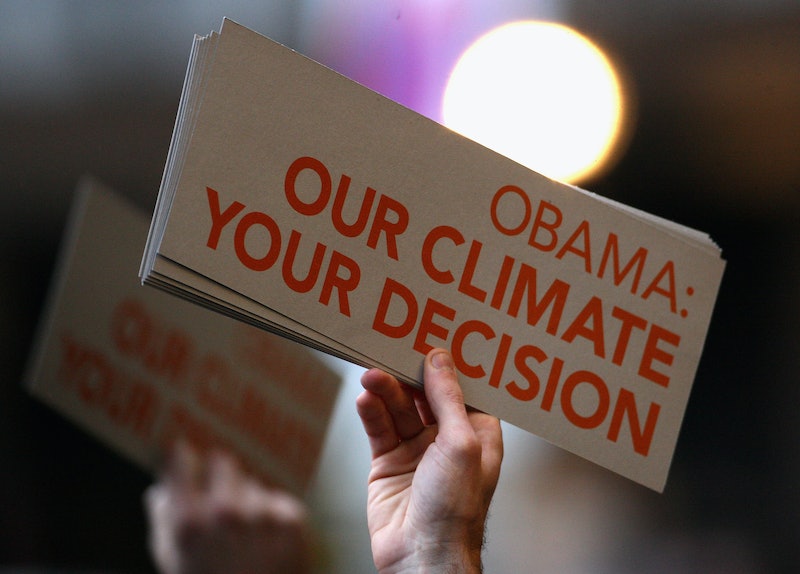 On Tuesday, President Barack Obama took a deliberate step toward fulfilling a promise he made in his inaugural speech: to implement America's first strategic plan to address climate change.

Obama began his discussion by pointing out that although 40 percent of American's carbon pollution comes from power plants, there still isn't a law limiting the amount of carbon pollution plants can "dump into the air for free." Obama's main proposal for the first step of his plan—using less dirty energy— is to end the practice of unlimited carbon dumping by power plants, which he called "not right" and "not safe."

Moving on to the second step—using more clean energy—Obama plans to "double our energy from wind and sun," and will have the Dept. of Defense install 3 gigawatts of renewable energy on its bases. He also called for an "end to tax breaks for big oil companies and invest in clean energy companies that will build our future."

Finally, in order to accomplish the third step (wasting less energy) Obama said that the federal government will "set a goal of using 20 percent renewable energy," and will "aim to reduce carbon pollution by 3 billion tons by 2030."

Obama also emphasized that he wants to see a "market-based solution to climate change."

"What you'll hear from the special interests and their allies in Congress is that this will kill jobs and crush the economy," Obama cautioned, adding that the same fears had been raised over previous green measures, and were found to have no basis.

The president also addressed public concerns over the Keystone Pipeline, saying "the net effects of the pipeline's impact on our climate will be absolutely critical to determining if this project is to go forward."

Obama made clear at beginning of his speech that climate change is a "challenge that does not pause for partisan gridlock." Many argue that the Obama administration could make more rapid progress against carbon pollution if it does't wait for Congress to act, though that doesn't appear to be the route the president is taking. You can read the full plan here:

As Obama said toward the end of this speech, "these standards don't sound all that sexy," and results from this plan will not be seen immediately. It will play out more like "tapping the breaks of a car to come to a complete stop before going in reverse." But he is convinced this is a fight that America can—and must—lead in the 21st century. "The question is not whether we need to act...The questions is whether we will have the courage to act before it's too late."