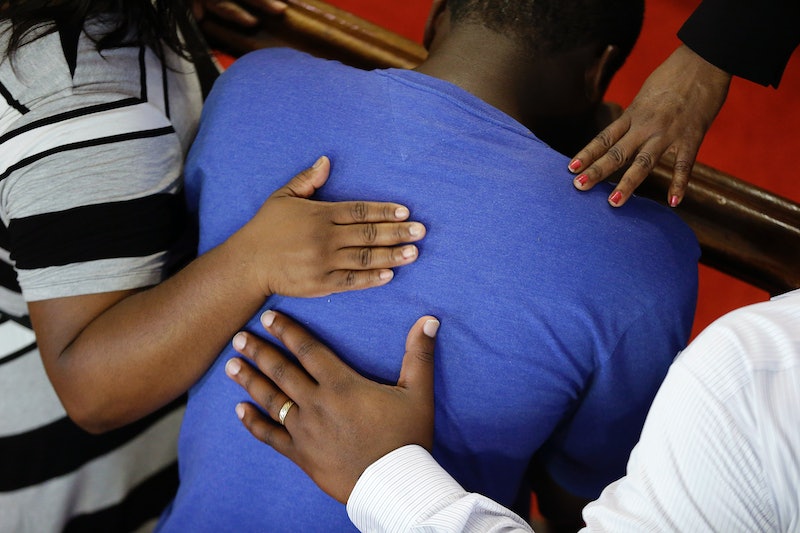 The tragic shooting at a black church in Charleston, South Carolina, last Wednesday has inspired many political and social justice leaders to call for immediate public and government action. While some have taken the opportunity to comment yet again on the troubling state of racism in this country, others have resurfaced conversations about everything from gun control laws to the death penalty. But in an interview with CBS' Face The Nation Sunday, the NAACP's president discussed the role of hate groups in particular, calling for a stronger investigation into their practices and harsher prosecution.

In his interview, the civil rights organization's president Cornell William Brooks highlighted the growing threat of hate groups, in light of news that alleged Charleston shooter Dylann Roof was heavily influenced by one:

This crime may have occurred in moments. But it came into being over some time. This young man was indoctrinated, radicalized, if you will, with an ideology of white nationalism or racism. And so the point being here is we've got to look at not only this individual act of brutality. We also have to look at the atmosphere from which it emerged. And we have to address that.

So what exactly is a hate group? The phrase itself often gets thrown around pretty freely, as a blanket statement for basically any group that contains people who are racist or prejudiced. But according to the Southern Poverty Law Center (SPLC), hate group has shared beliefs or practices that attack or malign an entire class of people. There are also a ton of them out there, classified into all sorts of different groups like: Neo-Nazi, Anti-Immigrant, White Nationalist, Anti-LGBT, Ku Klux Klan, Black Separatist, Neo-Confederate, Border Vigilantes, and Radical Traditional Catholicism (just to name a few).

As for their actual methods and activities, those also run the gamut — from criminal acts, marches, and rallies to speeches, meetings, leafleting or publishing. In other words, a hate group doesn't have to be violent to earn the name (even though it sometimes does). That being said, one person alone running a racist website can't exactly be classified as a hate group; the strength is in the numbers.

And believe me, there's a troubling amount of hate groups out there, with plenty of members in each. The SPLC reports that 784 active hate groups currently exist throughout the United States. In fact, every state in the continental U.S. has at least one active hate group — the most being in California, with 57, and the fewest being Rhode Island and Wyoming, who only have one each. While that news may surprise you, there's clearly an association between hate groups and population.

However, a few standout states do have a particularly large number given their area sizes and populations. The District of Columbia has 16, and New Jersey has 40. South Carolina, where the Charleston shooting recently took place, has 19 hate groups in total, including the Original Knight Riders Knights of the Ku Klux Klan, the Loyal White Knights of the Ku Klux Klan, and the Council of Conservative Citizens (CofCC). And their influence is clearly strong. According to The Daily Beast, the latter organization was the very group that inspired Charleston's alleged shooter Dylann Roof to commit his crimes. As the SPLC notes, the CofCC is a modern reinterpretation of the White Citizens Councils, a hate group from the 1960s that fought against school desegregation. Today, it attempts to educate whites on the supposed prevalence of black crime.

A hate group's power can also often extend beyond violence. In fact, many groups have contributed to According to reporting by The Guardian, the president of the CofCC donated $65,000 to the presidential campaigns of Ted Cruz, Rand Paul, and Rick Santorum, though Cruz said he would be giving a refund.

Religious Freedom Watch adds that these hate groups are so effective because they "instill fear in the uninformed." According to the Department of Justice (DOJ), of all crimes, hate crimes are the ones most likely to "create or exacerbate tensions, which can trigger larger community-wide racial conflict, civil disturbances, and even riots." Their very existence also puts cities at a greater risk of social and economic downturn. And when you run the numbers when it comes to these crimes, the stats are startling. As the DOJ reports, the FBI received 10,706 reports of hate crimes in 1992, the most recent year of data available, which involved 11,039 victims, and 10,021 known perpetrators. These incidents included 12 murders, 10 forcible rapes, 1,444 aggravated assaults, 1,762 simple assaults, and 4,130 acts of intimidation.

Coupled with the tragic events in Charleston, these alarming stats are exactly why leaders like Brooks are now calling for the government to step in in a bigger way, enforcing investigation and prosecution on hate groups wherever necessary. But on Sunday, Brooks also pointed to the many other ways the nation needs to open its eyes to the pervasive racism that surrounds us every single day — even the acts that don't involve violence. In his Face The Nation interview, Brooks noted that there were plenty of small signs that Roof had strong, racist leanings; like the fact that he drove a car donning the Confederate flag, and frequently wore shirts with an apartheid-era flag on them. On that, Brooks had this to say:

Each of these symbols is illustrative of an underlying racism in this country, among a minority of Americans, but a level of racism and racial bigotry, and racist ideology that we cannot blink, we cannot ignore. It is a moral ugliness in our midst, but we've got to address that.

We certainly do; and I can only hope that happens much sooner rather than later.