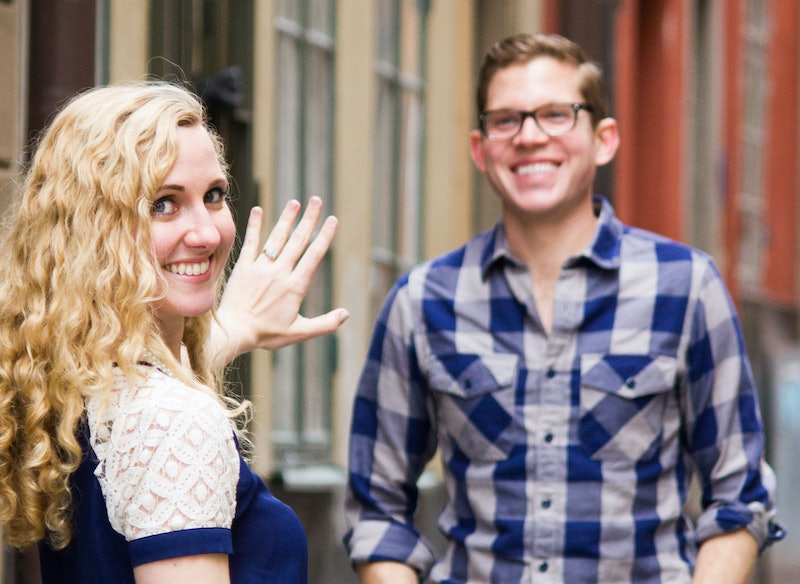 After nearly five years of dating, my boyfriend recently popped the question while we were traveling in Stockholm (it was about time!). The news prompted a flood of well-wishes from friends and family. "Mazel tov!" "So happy for you both!" Etc., etc. But one innocuous comment set me off. It was something along the lines of, “So happy for you two! I bet you can’t wait to become Mrs. Cooper!”

Cue the record screech. I came from a pretty religious upbringing. Not along the lines of Saved! or anything, but my background is conservative enough that nearly all of my female friends from my parochial Christian high school in Ohio married a year or two after graduating college (if not sooner). And they all took their husbands’ names. The issue wasn’t even up for discussion, and so the “Can’t wait to be Mrs. So-and-So” Facebook posts were just as common as the “He asked … and I said YES!” announcements cluttering my news feed. I also spent a year studying at a very conservative Christian college (long story), where I was shocked to hear the words "ring by spring" on the lips of nearly all the upperclassmen. Many told me they were just studying at college to get what they called their "MRS" degrees.

That just wasn't who I was. My parents raised me to be a critical thinker who always questioned things. But even so, it seemed everyone around me still expected me to be this earnest, virginal creature waiting for her "real life" to start the day she gets married. In the conservative culture I was raised in, marriage was just what you were supposed to be focused on if you were a good Midwestern girl. And without question, you just took your husband's name, and maybe got a vanity plate on your Lexus SUV that said "MRS SO-AND-SO." Other goals and interests (like having a career) were tolerated, but somewhere along the line, someone would inevitably ask with feigned concern, “How will you find time to look after your husband? And the children?”

I didn't follow the tired trajectory laid out for me. Instead, I moved to New York City, worked my butt off for years to become an editor at a top newspaper, and lived with my boyfriend before deciding to tie the knot. And yet, as soon as I got engaged, the old expectations about how soon-to-be married women should act (and what name they should use) were back on the table.

I thought that actually being engaged might change how I felt about this very domestic disturbance. As if once I had the ring on my finger, it would be like holding your firstborn child, and you’d feel this new feeling you'd never felt before and everything you believed before wouldn't matter any more — just the man you are about to marry. But it had quite the opposite effect. My name has always been the root of who I am, like my curly hair or my love of musical theater — not to mention my professional identity as well. But it’s more than just the name I’ve done all my work under. It is inseparable from who I am.

So now the challenge is planning how to elegantly convey to my wedding guests that I won’t be Mrs. Cooper after the ceremony. It’s easier to tell our more conservative guests that I’m keeping my name for “professional reasons” (Read: I’m too lazy to change my Twitter and Instagram handles) or to “honor my adoptive parents.” Both are very true, but neither is the main reason.

And though I sometimes feel alone in my devotion to my last name (especially when I scroll through my Facebook feed), I'm not. According to a recent survey by the New York Times Upshot blog, 22 percent of married women have kept their last names in recent years; up from 14 percent in the 1980s. Many women surveyed said it was less about fighting the patriarchy than it was about gender equality. That line of thinking resonates with me. Why should women have to change their names when they marry, just because that's what was done in the past?

Sure, there is something comforting and lovely about sticking to time-honored traditions. But I don’t think it’s a sign of disrespect to cast some of the older, musty-smelling traditions away. Many couples live together for months, if not years, before tying the knot (as I have done — hooray for conforming to demographic trends!). And most already have a (somewhat) established career before they marry, meaning that parents (specifically the bride’s parents) often aren’t paying for the big day. My fiancé and I, for example, will probably pay for most of our ultra-laid-back wedding ourselves. (For those who are curious, he's not so into taking my last name either. His rationale? "I've always been a Cooper, and I'm kind of attached to my name.")

None of this stuff is in any traditional bridal guide. And so far, I've felt relatively little pushback on these points. No one has expected me to conform to any of these other wedding traditions that don't make sense for me or my life. And yet, when it comes to issue of holding on to my last name, I still get the side-eye.

Meanwhile, while in Sweden, I learned that it's pretty much expected for women to keep their last names. Many couples don't even go through the trouble of getting married, viewing it as an out-of-date custom, and are curious and perplexed about what they see as the American obsession with weddings. My time here just confirmed what I had already thought: that changing your name isn't inherently a part of marriage. Rather, it's another cultural tradition — one we're just as free to discard as any other one that doesn't work for us.

One thing I’ve learned in the short time I’ve been engaged is that things cannot be as easily sorted and classified as they were in the days of Lisa Frank binders, or even as easily as they are in my fancy new Pinterest-inspired wedding planning books. To some people who hear about my engagement, I’ll likely always be the headstrong woman who was too obsessed with her career to change her name. Maybe others will say that I didn’t love my husband enough, or care about the "unity" of our future family. Or they'll write me off as yet another member of the “East Coast Liberal Media Elite,” whatever that means. Some other people in my life might even say that getting married is anti-feminist. But just as there's no point in going into debt for a celebration we can't afford just to adhere to tradition, there's no point clutching at my pearls and worrying that I'm going to offend a distant family member by not catering to their idea of normalcy.

People aren’t manila envelopes. They can’t be filed into the appropriate boxes for the convenience of others. We are complex, and our relationships, marriages, and lives don't have to make anyone but us happy. Which is also why I'm not here to judge anyone who did take their husband's last name. Your name is your prerogative! And we should all be allowed to do what we is most meaningful to us with our names, without judgment from others.

I'm keeping my last name because I never viewed it as on lease, as something to give up as soon as I wed. If my fiancé and I are starting a new life together, it’s important to set the tone. And for us, that includes me keeping my name. My name is a part of me, and by keeping it, I'm taking part in a new tradition. That’s how progress is made, isn’t it?