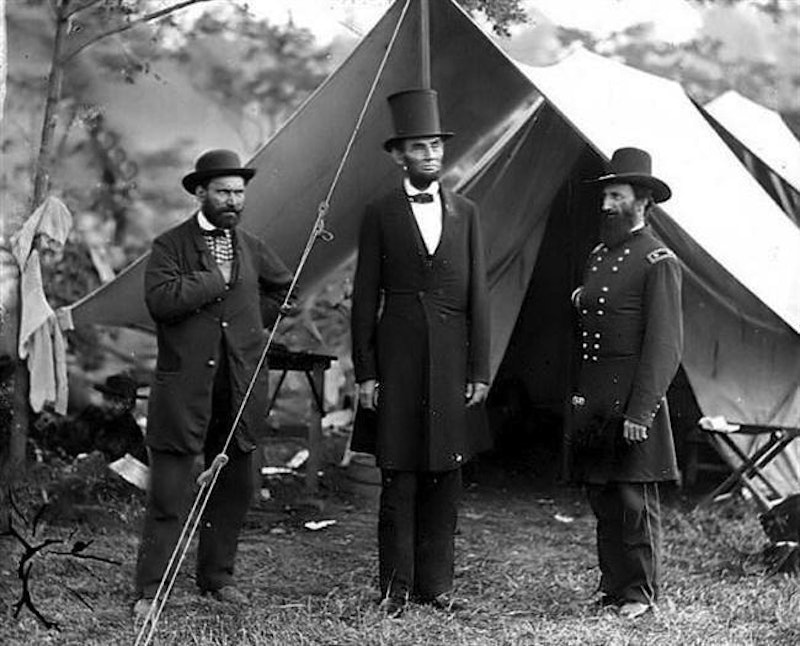 If anyone happens to see a few Lincoln impersonators milling around Gettysburg, Va., today, not to worry: They're there (well, at least one of them, anyway) to give a commemorative speech for the 150th Anniversary of the Gettysburg Address. Thousands came to the city Tuesday to mark the Gettysburg Address Dedication Day Ceremony, where a commemorative wreath was laid, an impersonator read the address, and Secretary of the Interior Sally Jewell spoke to mark the occasion. After a gun salute to African-American troops, the Oath of Allegiance was also conferred to 16 new American citizens by Supreme Court Justice Antonin Scalia.

You'll recall from history class/generally being alive that the Gettysburg Address was delivered by America's 16th president, Abraham Lincoln following the Civil War battle in Gettysburg. But why is the speech so historically significant? Here's a refresher:

Although the battle took place in July, the speech was given Nov. 19, 1863. On the day of the speech, Gettysburg was just beginning to recover from the horrific battle: Only 2,000 people actually lived in the town, but 23,000 Union and 28,000 Confederate soldiers were killed (more than one-quarter and one-third of each army, respectively) during the three-day battle.

And talk about an underdog story of a speech: Lincoln wasn't even the featured speaker that day, and though his speech only had 271-273 words, it took 13 minutes to deliver. (The marquee orator, Edward Everett, went through 13,097 words in two hours.) Apparently, that was standard time for speeches back then, and critics loved Everett's speech — and hated Lincoln's.

The speech was not well received by the press. New York World called Lincoln out for the whole "Four score and 20 years ago" bit not being accurate at all, the Chicago Times called the misstep rhetoric "a perversion of history so flagrant that the extended charity cannot regard it as otherwise than willful," with the rest of the speech full of "silly, flat and dish-watery utterances."

(Below: a Twitpic of Lincoln post-speech)

But the speech held up. Turns out it was all about brevity, simplicity, and using short words. The speech forever changed the length and format of political speechwriting. (Even JFK asked his speechwriter to figure out what made Lincoln's speech damn good.)

"Modern politicians are responding to the demands on modern media and short-attention span modern mass publics, both of which push politicians in the direction of offering memorable ten-second clips suitable for rebroadcast in news cycle after news cycle," said political science professor at Virginia's University of Mary Washington Dr. Stephen Farnsworth.

Of course, the speech's message was also key: though the people of Gettysburg were outnumbered by corpses and casualties, Lincoln managed to make the tragedy of the Civil War blend with hope for the future.

And it's still relevant today.

Here's the text as it is on the Lincoln Memorial:

Fourscore and seven years ago our fathers brought forth on this continent a new nation, conceived in liberty, and dedicated to the proposition that all men are created equal. Now we are engaged in a great civil war, testing whether that nation, or any nation so conceived and so dedicated, can long endure. We are met on a great battlefield of that war. We have come to dedicate a portion of that field as a final resting place for those who here gave their lives that this nation might live. It is altogether fitting and proper that we should do this. But, in a larger sense, we cannot dedicate…we cannot consecrate…we cannot hallow…this ground. The brave men, living and dead, who struggled here, have consecrated it far above our poor power to add or detract. The world will little note nor long remember what we say here, but it can never forget what they did here. It is for us, the living, rather, to be dedicated here to the unfinished work which they who fought here have thus far so nobly advanced. It is rather for us to be here dedicated to the great task remaining before us...that from these honored dead we take increased devotion to that cause for which they gave the last full measure of devotion, that we here highly resolve that these dead shall not have died in vain, that this nation, under God shall have a new birth of freedom, and that government of the people, by the people, for the people, shall not perish from the earth.