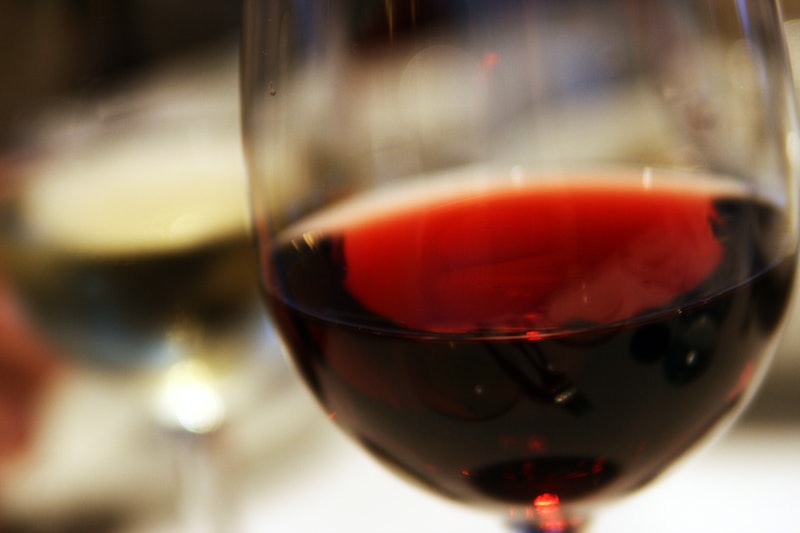 You didn't really need another reason to keep on loving red wine, but I'll give it to you anyway: a new study says drinking red wine may help with weight loss. Uh, is 12:46 PM too early to start drinking? Because at this point, that's probably the only thing keeping me from breaking open a bottle right now. It's got to be five o'clock somewhere, right?

You might have heard that red wine can help reduce your risk of heart disease, a benefit that's largely due to a compound found in red wine called resveratrol. In addition to its potential heart benefits, resveratrol has also been found capable of transforming fat in the body from "bad" fat into "good" fat. There are many different types of fat in the body; scientists believe one the good types, brown fat, actually acts more like muscle in that it can burn other types of fat when activated. Since we already know that resveratrol can turn flab into brown fat, researchers at Washington State University decided to take things one step further: Does resveratrol play any role in weight loss?

The scientists gathered up a bunch of mice for the study, and tested what would happen if they gave the mice an amount of resveratrol roughly equivalent to the amount humans get in 12 ounces of fruit per day. They found that the mice who consumed resveratrol gained 40 percent less weight than those who didn't. So, the logic goes as follows: Resveratrol helps stave off weight gain (in mice, at least). Red wine contains resveratrol. So, drinking red wine could help reduce weight gain in humans. Right?

Well, maybe. First off, even though the skin of red grapes have been shown to contain resveratrol, the lead researcher in the study, Professor Min Du, notes that wine has less of the compound than actual grapes. Secondly, he also notes that many of the beneficial compounds in grapes get filtered out during the wine-making process, so you might not even be getting those health benefits, anyway. Furthermore, additional research has shown that resveratrol may not in fact have a significant long-term effect on things like cancer, heart disease, or inflammation like we previously thought.

So, will your red wine consumption alone help you lose weight? Maybe not all on its own, though it might give you a little help along the way. Doctors recommend drinking red wine in moderation and eating an overall well-balanced diet with plenty of fruits and vegetables. In other words, definitely hold off on your fermented grape juice cleanse. But just because drinking red wine isn't going to make five pounds magically melt off my body doesn't mean I'll stop drinking it.

But even though red wine alone might not be the weight loss miracle we've been waiting for — and besides, losing weight and getting or being fit definitely aren't the same thing, anyway — it still has been shown to have some health benefits. So the next time someone questions your copious wine consumption, just attribute it to any one of these factors:

1. It can protect against certain cancers.

A 2014 study found that our good pal, resveratrol, might protect against certain types of head and neck cancers by detoxifying the effect of pro-carcinogens, stopping cancer cells from growing and even killing them outright. I'll drink to that.

2. It can help slow memory loss.

A study that came out in 2015 showed that resveratrol can help prevent age-related memory loss and mood function by helping with formation of nerve cells. Scientists also believe this ability might help treat neurological diseases like Alzheimer's.

Consuming resveratrol can have cardiovascular benefits that are similar to the kind you'd get from going to the gym. Hooray! But, scientists warn, these benefits are limited, so replacing your gym with a wine cellar is not the way to go.

More like this
This Psychological Effect Might Be Keeping You From Hitting Your Goals
By Lexi Inks
10 Pumpkin Recipes That Are Way More Creative Than Pie & Lattes
By Rebecca Deczynski and Alexis Morillo
On TikTok, Tinned Fish Date Night Is The Latest Viral Food Obsession
By Emma Carey
Rachel Zegler Reveals She Had Breast Cancer Scare
By Radhika Menon
Get Even More From Bustle — Sign Up For The Newsletter