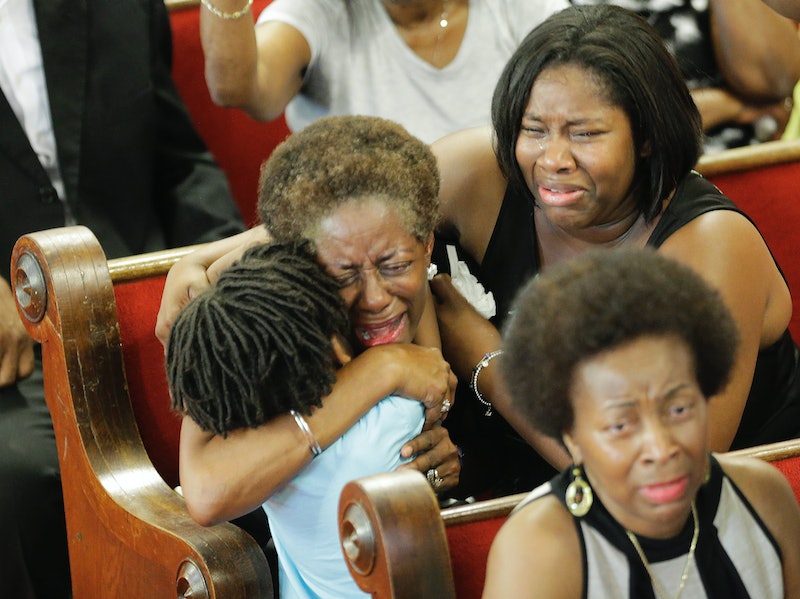 Senseless, violent acts like the shooting at Emanuel African Methodist Episcopal Church last Wednesday can't help but shock everyone when the occur. However, the Charleston, South Carolina, incident only highlights a disturbing pattern that's been building for decades: the targeting of black churches in the American South. While perpetrators of racial violence often choose to disrupt a place of peace, The Atlantic theorizes that those who commit hate crimes choose churches in particular as a scare tactic, and are doing so to evoke memories of church violence from the 1960s.

It's hard to say whether alleged Charleston shooter Dylann Roof knew about the historical context at work when he walked into the Episcopal church on June 17. But he certainly fits the traditional profile of a mass shooter, as outlined by a study published by the National Institute of Health. And while mental health professionals often say that it is extremely difficult to predict if someone's capable of committing this kind of hate crime, The Huffington Post reports; but once discovered, they often seem to exhibit similar characteristics.

On an otherwise normal day, Dylann Roof came to instill violence and fear in the very place that was a sanctuary for the local black community in Charleston. In fact, according to NPR, Roof's friends said he wanted to start a race war. There was no recognizable choice in victims, just a trail of innocent people. But sadly, that story has become all too familiar. Here are eight other times black churches became places of violence throughout history:

Shortly after President Obama won the 2008 presidential election, three men were charged with setting the Macedonia Church of God in Christ on fire. The predominantly black church was almost finished with new construction, and the participants later admitted that the arson was racially motivated, according to The Huffington Post.

Three Alabama men reportedly got drunk before destroying parts of three black churches with sledgehammers in Sumter County. According to the Tulsa World, the men defaced the pews, windows, and kitchens of the western Alabama churches. Albert Winston Short Jr., 19, and Robert Michael Soliday, 22, were each sentenced to a six-month work release program and fined $30,000, while a third defendant, 18-year-old Andrew Hoggle, died before sentencing of a self-inflicted gunshot wound.

Though their original target was an activist who was apparently not in church that day, members of the Ku Klux Klan began beating parishioners as they were leaving Mount Zion A.M.E. Church. The group burned the historic church to the ground and later became the subject of the 1988 film Mississippi Burning, according to The New York Times. About three dozen other black churches were burned in Mississippi that summer, too, during a drive to register more black voters.

According to Reuters, 26-year-old Steven Scott Cantrell was sentenced to three years in prison after throwing fireballs at a black church while walking by. The Texas man was apparently trying to gain status within a hate group called the Aryan Brotherhood. Once taken into custody, Cantrell admitted that he set fire to Faith in Christ Church after he saw an African American man passing by in a wheelchair.

The burning of black churches continued to sweep through the South in the 1990s. According to The Washington Post, a period of 18 months in 1996 saw an especially high rate of violence, including 37 suspicious fires set at various black churches. In one such case, someone threw 18 Molotov cocktails into the Inner City Church in Knoxville and wrote racial slurs on the walls, including, "White is right," according to the Los Angeles Times.

In an attempt to intimidate a racially mixed congregation, three men set fire to Second Baptist Church in Fort Dodge by burning a makeshift cross. The Los Angeles Times reported at the time that authorities arrested all three — Christopher Dean Quillen, 23, John Raymond Quillen, 24, and William Harrison, 24. Luckily, no one was in the church at the time and no injuries were reported.

Late one summer night, Christopher Frank Martin, 35, and Zachary Lee Bryant, 23, broke into a black church in Virginia and caused $77,000 in damages. At the time, Mount Moriah Church had only ten members and held services twice per month, according to The Roanoke Times. The congregation later took donations for repairs so that the 86-year-old building could be restored.

The Birmingham bombing at 16th Street Church in September 1963 remains one of the most infamous instances of bloodshed at a black church in U.S. history. According to The Atlantic, Ku Klux Klan terrorists killed four young girls, and left the nation in mourning. Later commenting on the bombing, Dr. Martin Luther King, Jr. famously said of the girls: "They died between the sacred walls of the church of God. And they were discussing the eternal meaning of love."