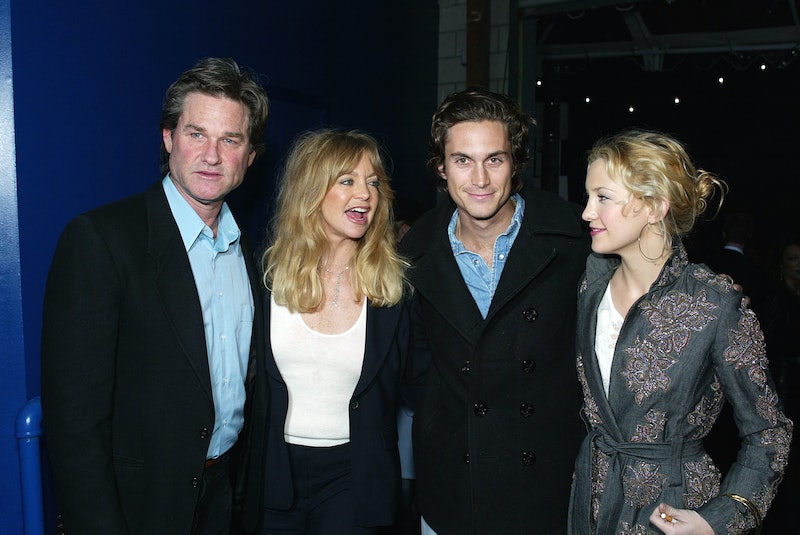 Ouch. As the nation celebrated the many dads who are there for their kids through thick and thin, Kate Hudson and her older brother Oliver Hudson made it crystal clear that their biological father Bill Hudson won’t be getting a World’s Best Dad mug anytime soon. Oliver posted a very sweet photo on Instagram of his sister, dad, and himself from when they were children — but the caption couldn’t have contrasted the image more: “Happy abandonment day… @katehudson.”

Bill Hudson married Kate and Oliver’s mom Goldie Hawn when the actress was eight months pregnant with Oliver, according to the Daily Mail. After they finalized their divorce in 1980, when Oliver was just four, their dad slowly lost touch with them and they now consider him “estranged” from their family. Over the years, Kate and Oliver got close to actor Kurt Russell, Hawn’s long-time partner who helped raise them.

In an interview with Vanity Fair that took place when Hudson was 21, the actress said her father was "in and out of our lives," and that Russell was a "savior" who was there for her when her dad wasn't. She went on to say, "I don't hate him for it. I guess what I feel is frustration and curiosity — like, what was it about me he didn't want to know?"

Heartbreaking. It must be difficult to be expected to honor a dad you don't feel lived up to your expectations, but instead of keeping silent and private about it, Oliver opted to expose his true feelings about his father:

Rather than perpetuate the lie that every parent deserves a day to be thanked, the Rules of Engagement actor came out and said, well, no, passing along your genes doesn’t automatically make you a dad. Bill Hudson, who wrote a tell-all book about his marriage and family called 2 Versions: The Other Side of Fame and Family, has claimed he was alienated from his children after his divorce.

It really doesn’t help matters when your dad is going around talking about you in the media, as Bill Hudson apparently did to Kate when he told Radar Online that he loves his daughter, but that “she has been contrived and destructive with me and her other brothers and sisters,” is a “spoiled brat,” and has done things that “are just awful.”

How did Kate choose to handle Father’s Day? She kept things classy — but made her feelings known — by posting this photo of herself with Russell:

It's sad to think that Kate and Oliver can't make amends with their biological dad now, before it's too late. Unfortunately, life is not a movie and people don't always change or step up to the plate. Kate and Oliver can count their blessings — they are lucky they have each other, their mom, and Russell.

More like this
Kylie Jenner Shares A New Photo Of Her Son With Travis Scott For Father's Day
By Jake Viswanath
18 Father's Day Poems That'll Make You & Your Dad Tear Up
By Michelle Regalado and Siena Gagliano
21 Funny Memes To Text Your Dad On Father's Day
By Chelsey Grasso, Syeda Khaula Saad and Siena Gagliano
Selena Gomez Is Fine Being Single, But She Still Manifested Romance On 'SNL'
By Martha Sorren, Jake Viswanath and Jack Irvin
Get Even More From Bustle — Sign Up For The Newsletter