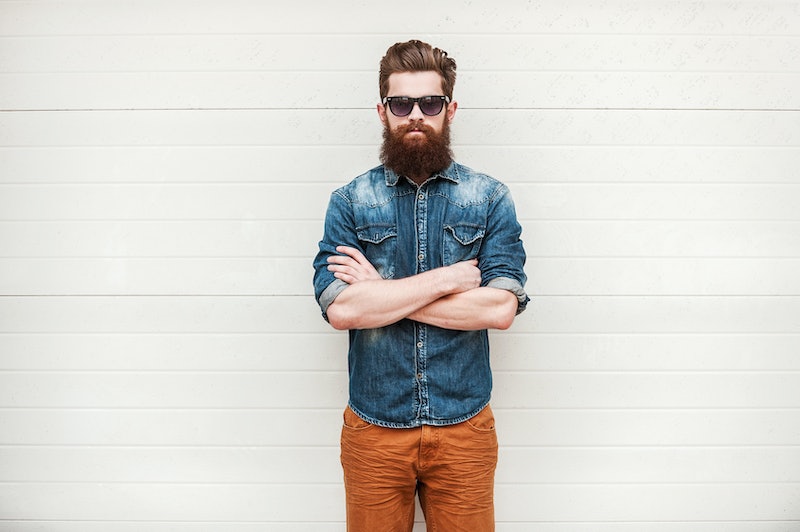 In three short weeks, I’ve talked to not, not three, but five women who were wronged by dudes. Dudes who seemed all well and dateable until their pinkish flags turned a bright, bloody red. At first, these guys exhibited issues that seemed like they could be overcome. They seemed like the things you tell yourself you're being too harsh about when seeking a partner. "Have a little faith," you think. "Everyone has some baggage." And then he dumps you, and you remember that not all baggage is created equal.

I want to tell you to be trusting, hopeful, open, and accepting of all people no matter their past circumstances or the mistakes it may seem like they’re probably going to make. But too many kind souls before you have been burned, and so I think it's about time to take a zero-tolerance policy on a few very specific findings — as long as what you're seeking is a committed relationship, anyway. Bottom line, if he’s that amazing, then he’ll overcome this baby-person stuff and win you over properly. I'm saying DO NOT DATE until he does. (Looking for casual sex? That's another story — you do you.)

A quick note on gender. These examples are based on experiences of women who date men, and therefore this is an article about straight men. If five straight male friends of mine get dumped in three weeks, I will write about it, promise. Here goes.

1. He says, “I just got out of a really long-term relationship, so I need to take it slow.”

Or in other words, "So I'm not really going to date you back." I'm sure there are exceptions to this, but I've never encountered one. If a guy had recently gotten out of a long-term relationship but was completely comfortable dating you fully and freely, he would not say "so I need to take it slow." He would simply take it slow, in a manner that is still respectful of the fact that you're actually dating and not just hooking up whenever he has some spare time.

2. You see him less than once a week the entire first month you’re seeing each other.

Sorry, but it's just not enough. Even if you're keeping things at a reasonable pace for the first few weeks, if you see him less than once per week and would like to hang out more, he's basically saying that he just can't make it a priority. Whether that's because his feelings aren't strong enough or his schedule is too packed isn't the issue, you should run, not walk, away.

3. You don’t meet at least one friend of his within the first two months you're seeing each other.

This is just not asking much. One friend in under two months. Either he doesn't have friends (problem) or he doesn't want you to meet them (bigger problem).

4. You don’t visit his apartment the entire first month you’re seeing each other.

Please let this be an obvious one. A person's home is a reflection of their self, and if you don't see that self within 30 days of dating, then that self is trying to hide something. Like the fact that he sleeps on a twin bed mattress in the same room as another person who is a raging drug addict, in the case of my one friend.

5. You don’t see each other in daylight within the first two months that you’re seeing each other.

Like the friends thing, I'm giving this two months because maybe you met in the winter time, when it's dark by 4:30, and you simply haven't had time for a day date. Let's remember that mornings (as in, the time it is after your sleepover) count as daylight, so this better happen pronto, or you've got a booty call situation on your hands.

6. He had a drug problem, but it’s totally under control now so he can use a little whenever.

I'm not getting into this one. The answer is no. I am sorry for the situation, and encourage you to encourage him to get help. You are not said help.

7. He says anything along the lines of "You’re too good/smart/accomplished/pretty for me.”

This sounds like a compliment, but is really vocal evidence of major insecurities that are going to rear their ugly head very soon. I'll allow it if — and only if — you say, "Don't say that. You're just as x, y, z as me," and he responds, "Thank you. I appreciate that. I just get a little insecure at times." Or something equally rational.

8. He is still really close to his ex. (Again, I’m sure there are instances where this isn’t an issue. I’ve just never met one.)

9. He “never has cash,” so you end up paying for anything that requires cash.

I realize it is 2015 and completely appropriate for a woman to pay for an equal number, if not more, of the dates shared. But you know when you're being bamboozled. It usually happens around the third time he "forgot."

10. He won’t let you leave a single item at his apartment within the first month.

So you've made it inside his apartment, but now you can't leave a hair tie there without him freaking out. Bad sign and rude stance. You're not moving in just because you store some almond milk in the fridge for your morning coffee.

11. He is active all over social media, and yet does not post a single picture including you.

If you're in his life, then you're in his social life. That's just the way the current communications cookie crumbles. I will make an exception for a person who posts zero personal information, ever.

12. He says “I’m a mess right now. You probably don’t want to get involved with me.” (That is a direct quote.)

A think this one speaks for itself, though you'd be surprised at how many times it doesn't. (Including the three times I personally fell for it over the course of a single year ...)

A version of this article originally appeared at 20-Nothings.com.

Why Girls Go For Assholes

The Final Word On Dating

Dating Rules From My Future Self