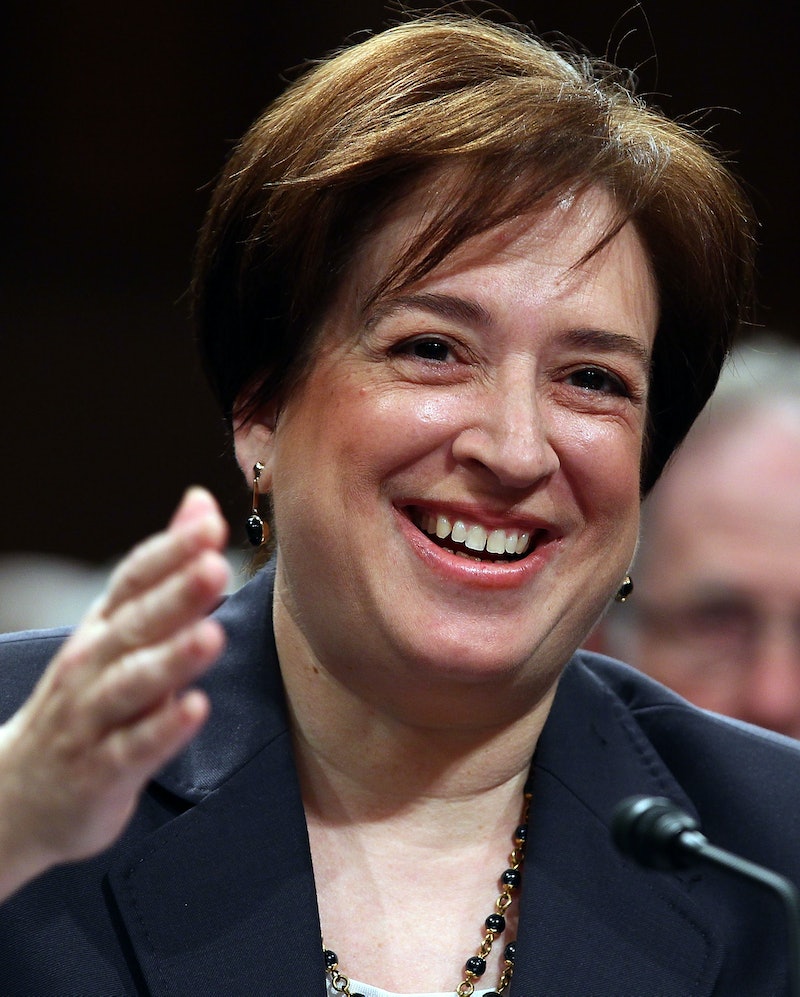 Elena Kagan is cool, guys. In fact she's so cool that she's been able to successfully hide that hip factor from the rest of us for a long time largely because actually admitting her coolness would be too mainstream. Luckily, one eagle-eyed Twitter user caught on after browsing Kagan's bio over on Supreme Court Review which stated, among other things, that the Supreme Court Justice had seen every single comic-book action movie ever. Guys, It's official: Kagan should be your favorite SCOTUS justice (no offense, RBG — we still love you, and we're rocking your "Notorious" tees).

A report by Politico on Monday pointed out Kagan has actually been pretty adept at stealthily injecting her wise geekery into her arguments before. In a recent Kimble v. Marvel dissent, which upheld the right of the comic behemoth to end royalties paid out to the petitioner and inventor of a children's Spider-Man glove that shot fake spiderwebs (the patent on the invention, and thus the royalty agreement, had expired in 2010), Kagan wrote that although the two had not agreed to any set date for expiration of payouts, it didn't necessarily mean that Marvel had intended to continue forking over the cash forever.

"The parties set no end date for royalties, apparently contemplating that they would continue for as long as kids want to imitate Spider-Man (by doing whatever a spider can)," wrote Kagan in the 18-page Court dissent. "But Marvel must have been pleased to learn of [another case where] patent laws ... prevent[ed] a patentee from receiving royalties for sales made after his patent’s expiration."

But wait — it got better.

According to Kagan, the decision was final... sort of. In the future, she maintained, the Supreme Court could potentially decide to reverse that decision, though it was in their best interest not to, given they would essentially be going back on their word. Kagan concluded:

What we can decide, we can undecide. But stare decisis teaches that we should exercise that authority sparingly. Cf. S. Lee and S. Ditko, Amazing Fantasy No. 15: “Spider-Man,” p. 13 (1962) (“[I]n this world, with great power there must also come—great responsibility”). Finding many reasons for staying the stare decisis course and no “special justification” for departing from it, we decline Kimble’s invitation to overrule Brulotte.

Upon reading her dissent, every single comic book fan likely burst into flames and died of happiness.

Kagan's bio on Supreme Court Review, of course, is also a gift. In it, Kagan is described as an avid hunter who has "hunted birds and antelope with Justice [Antonin] Scalia on multiple occasions." A fan of comic books and comic book movies, Kagan said in her bio that her "favorite film is The Avengers." Oh — and one more thing: She totally loves fro-yo and even had a yogurt machine installed in the court cafeteria for all to enjoy. Elena Kagan is essentially the Felicia Day of the U.S. Supreme Court.

If you still aren't convinced of just how cool Kagan really is, consider this. During arguments over a statute that would prevent the sale of violent video games, Kagan questioned whether the policy would include a ban on sales of the "iconic" game, "Mortal Kombat."

"A reasonable jury could find that Mortal Kombat, which is an iconic game, which I am sure half of the clerks who work for us spend considerable amounts of time in their adolescence playing, [should be banned]," said Kagan.

"I don't know what she's talking about," scoffed Justice Scalia.

Presumably, Kagan rolled her eyes at that point and proceeded to finish him.