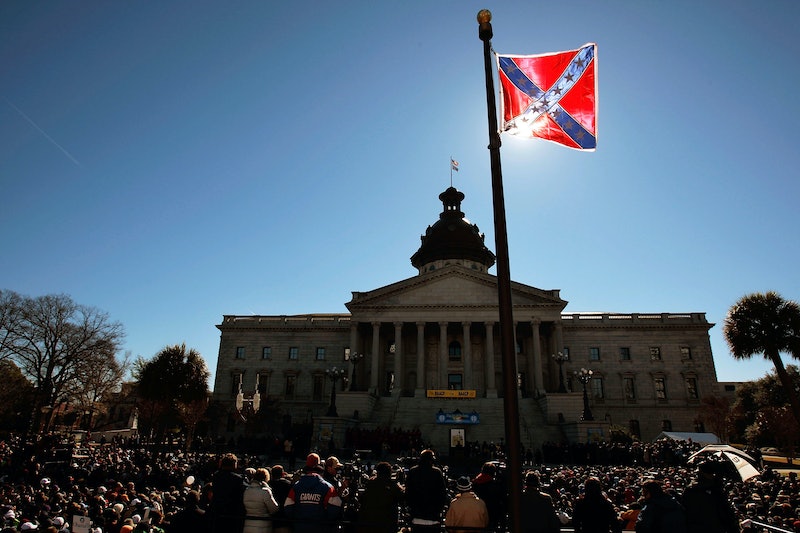 The debate over the Confederate flag has reignited after photos of alleged Emanuel AME Church shooter Dylann Roof showed him posing with various racist flags, including the one belonging to the Confederacy marching in the Civil War. The Confederate flag is currently flown widely and proudly across Southern states, and many supporters use arguments of history and free speech to justify it, even if that means completely ignoring the fact that the flag was used by many pro-segregationists, proponents of slavery, and — at the most extreme ends of the Southern-pride spectrum — people who are openly racist against black people. Luckily, there are a number of great ways to respond to Confederate flag supporters. I can't guarantee they will always work because sometimes reason doesn't triumph over blind loyalty. But in the fight for equality, a reason-driven social media debate is always worth a try.

States across the South still fly the Confederate flag or display it on the back of pick-up trucks as a part of the region's history. Seven states' flags are similar to or were somehow inspired by the Confederate flag itself, according to The Washington Post. Defenders of the flag often try to distance themselves from its racist roots in slavery, but it's almost impossible to do that if you know anything about the history of secession and the Civil War. Here are six common, ridiculous arguments from defenders of the Confederate flag and some logical — and just a tad sassy — ways to respond.

"The Civil War Was About State's Rights, Not Defending Slavery."

This is just factually incorrect. John Stuart Mill, one of the greatest political philosophers ever in existence, even pointed this out himself, according to the Post. Further, Jefferson Davis, the Confederate president, said the South had seceded because it "heard proclaimed the theory that all men are created free and equal, and this made the basis of an attack upon her social institutions; and the sacred Declaration of Independence has been invoked to maintain the position of the equality of the races," according to historical archives evaluating the cause of the Civil War.

Davis couldn't have any of that equality talk, and Davis' vice president, Alexander Stephens, called slavery "the cornerstone" of the Confederacy, according to the Post. The Confederate Constitution even prevented state governments from excluding slavery from their territory, according to the document, which was preserved by Yale Law. Case closed.

"Even If Part Of The War Was About Slavery, Not All Of It Was. I'm Representing The Historic & Political Part Of It."

OK, sure, and while you're doing that you're also representing racism and slavery. Because the war was about politics, which were about slavery, which was about hating, abusing, and forcing black people into unpaid labor. The symbol isn't a cherry-picking deal. I hate to pull out this comparison, but you can't wear a Nazi emblem and say you only supported the "history" behind Hitler's movement or that you liked his speeches. The Nazi emblem stands for the massacre of 6 million Jews (11 million people, total), just like the Confederate flag stands for years of abuse and enslavement endured by black people. More specifically, it stands for the war waged by almost half the country to maintain that abuse and enslavement because they believed that it was morally right.

"But We Don't Have Slavery Anymore. So Obviously I'm Not Arguing For That, & The Way I'm Using It Isn't Racist."

That's cool that you're not a racist, but the symbol definitely is. (See above two answers for why the symbol can't be divorced from racism. Repeat Nazi analogy.) And just because we don't have slavery anymore doesn't mean the symbol can't stand for racism. Because we definitely still have racism. See the hundreds of articles about white police officers disproportionately killing black people, or the persistence hate crimes against the black community, or instances like the shooting in Charleston, where Roof used white supremacy as the justification for his deeds. If you aren't racist, and you actually want racism to stop, then using this symbol — regardless of how you are trying to use it — hurts the movement for racial equality because it endorses our racist past.

"So What If The Flag's Past Is Racist. Putting Up A Flag Doesn't Hurt Anyone."

(I hope no one actually says this for real.) Well, let's put aside the fact that you just said perpetuating racist symbols is OK. No, perpetuating racist symbols is not OK, and it does hurt people. Example: The shooting in Charleston, where nine people were killed, allegedly because some young man's racist ideology was fueled by a mass of symbols and online support for hating black people.

But if someone won't listen to indirect harms, you can hit them with real, direct harms. Black people are affected by racist symbols like the Confederate flag. Flying a Confederate flag in front of black people is almost like saying, "Yeah, you were enslaved at one point, and we're not going to let you forget it." Like, really?!

"Maybe The Flag Is Racist, But People Back Then (During The Civil War) Didn't Know Any Better. Now That We Know Better, We Can Fly It."

This is both factually incorrect and just plain ridiculous. First, the South did know better. That's kind of why the Civil War happened. People started voicing their outrage over slavery in the early 1800s. There were a number of anti-slavery churches, and Oberlin College was founded as the first abolitionist college in 1833. By the time the Civil War started, people in the North and the South were aware of why slavery was wrong, and those who defended the Confederacy just chose to ignore it (kind of like what we're doing with the flag now).

Second, if we know better, then WE SHOULD KNOW BETTER. That's like using your own intelligence to justify your own stupidity.

"The Confederacy Were Actually Freedom-Loving People Who Stood Up To Government. That's What's Important."

Oh, yes, you're right. Because freedom-loving people definitely enslave others because of their skin color. Right. Further, they didn't stand up to their government. They resisted it because it was trying to free a population that they were using for no-cost labor. The Confederates wanted states' rights so they could keep slavery. That's the whole point that you're missing — they wanted to keep slavery, and the new Confederacy would've mandated this across the board. It, and a number of other laws, wouldn't have even been left up to the individual state under the Confederacy's new constitution. So, bummer. Now the Confederate flag is still racist and even less of a screw-the-government symbol. #SorryNotSorry.