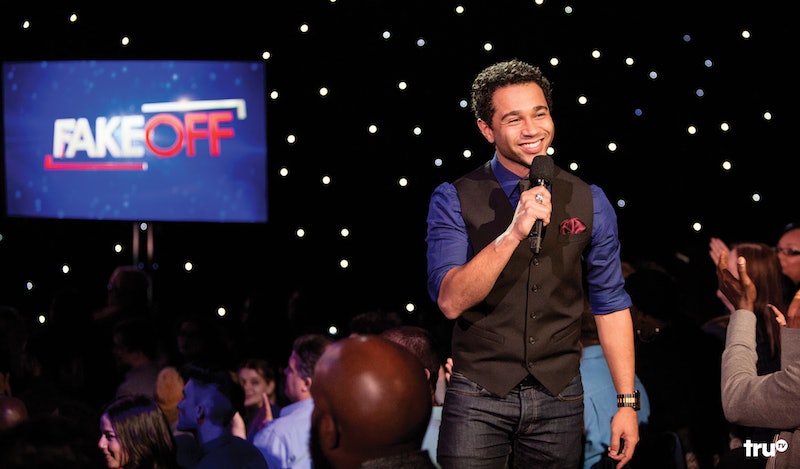 It might seem ironic for truTV to have a show devoted to faking it, but here we are. Fake Off , the show where different performing teams duke it out dance style to create pop-culture homages, will have its Season 2 finale on June 24. Despite the title, there's really nothing fake about these performances. According to the show, the term "faking" means the groups are recreating pop culture moments. These teams are putting their all into their routines, which are actually pretty original even if they include pop-culture riffs. It's not like a celebrity lip-sync competition, where the performers only pretend to sing (although, even then, those routines get kind of elaborate). It's kind of awe-inspiring the stuff the Fake Off teams can do, so, I already find myself asking, will Fake Off be renewed for Season 3?

truTV hasn't announced yet whether there will be another season, and it's always hard to tell with these quick reality shows, especially one so under-the-radar that ratings information isn't readily available. But, truTV noted that, after the premiere in 2014, the audience grew weekly, and it seems generally well-liked by critics. I bet this isn't the last we've seen of the fakers. Even though it hasn't yet been renewed, it should be, and here are six reasons why.

2. Performances Are Only 90 Seconds

For someone with an obliterated attention span, that's the perfect amount.

3. There Are Only Eight Episodes

See: Obliterated attention span. I used to be a huge So You Think You Can Dance fan, but endless audition rounds in tons of cities made me stop tuning in at the beginning, and then eventually I'd forget to watch altogether. Just skip to the good part!

These sets and costumes are elaborate, which is something you don't always see with these reality shows. I appreciate that Fake Off doesn't skimp.

So many of these talent-based competitions are so focused on the technical abilities of the contestants, they forget about anything else. You might get so wrapped up in whether or not the singers on The Voice are hitting the notes and turning in a good performance, the actual music fades into the background. Instead, Fake Off wears its love of pop culture on its sleeve, which means the creators are pop culture nerds just like its viewers.

I don't know how to decribe this post-apocalyptic-Peter-Pan-meets-evil-landstriders-from-The-Dark-Crystal number, but I'm pretty sure it's better than Terminator Genisys is going to be.