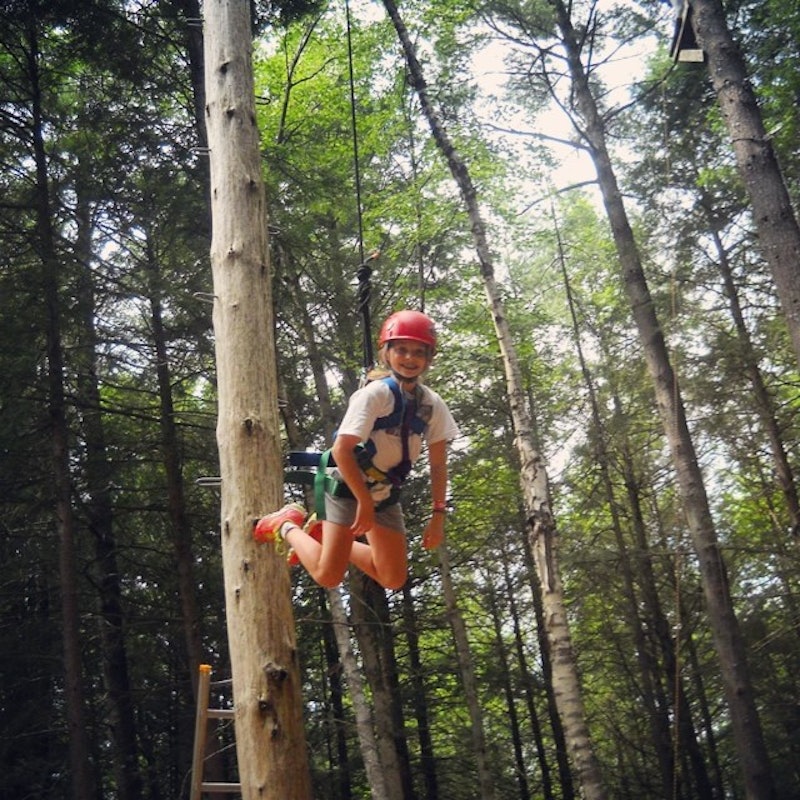 Your teen and tween years are awkward enough for anyone, but young girls have it especially rough. From online bullying to continually unrealistic beauty standards, it's no surprise that girls' self-esteem tends to plummet as soon as they're out of elementary school: studies find that once girls hit high school, 44 percent of them are already trying to lose weight. More than 70 percent of girls ages 15 to 17 will avoid normal daily activities, even something as regular as attending school, when they feel bad about their looks. And a staggering 75 percent of girls with low self-esteem have reported engaging in negative activities, such as bullying, smoking, and drinking.

It's time to take action against all the negativity young girls face — and summer is a great time to do it. Luckily, lots of organizations out there are stepping up to the plate to help young women feel more powerful. For every type of young girl battling today’s societal standards, here are seven empowering summer camps for girls to get them out of the house (and their comfort zones) and into a world of confidence. Because girls these days have to be prepared as ever to fight the power.

There will be no outdoor hikes, no singing around the campfire, and no afternoons spent at the pool at this summer program. Girls Who Code is for the future computer scientists and engineers of the world. Their Summer Immersion Program puts these techies face-to-face with female engineers and entrepreneurs to see what it takes to make it as a young woman in tech. Over the course of seven intense weeks, campers dive into robotics, web design, and mobile development. The program also focuses on what happens to women once they're ready to get out and start their careers — somebody’s got to deal with the ever-dreadful tech-bros, and these coders might be the ones to do it.

You can find Girls Who Code's Summer Immersion Program in more than a dozen cities spanning from California to Massachusetts, and donate to the organization here.

Girls Rock! Camp aims to get young girls, many who have never even played an instrument before, to rock. Particpants will suddenly find themselves behind the drums, thrashing out on guitar, or screaming behind the mic. After a few days of music instruction, they're on a stage, rocking out and throwing the horns in front of an audience at a real music venue. Pretty sick.

Some Girls Rock! camps even offer more than just music instruction, from yoga to self-defense classes. The nice thing about Girls Rock! is that it's offered in several states, and continues to grow with every passing year. You can find the closest one to your neighborhood on their website. If there isn’t one in your neighborhood, they’ll show you how to start one.

On the surface, Girls Leadership looks like your average summer camp full of outdoor fun. But the popular camp digs deep into the minds of teenage girls by focusing on their confidence, communication, and relationship skills. Girls Leadership also focuses on conflict resolution workshops to show these teens what to do when confrontation arises. By the end of the camp, these girls are ready to take risks and stand up for themselves (and others). There are also parent/daughter workshops that work with campers to strengthen their familial relationships. Girls Leadership is offered in California, Colorado, New Jersey, and New York. Donate here.

There is no idly standing by at GirlVentures. The organization's summer programs keep campers busy with activities like rock climbing, backpacking, camping, and kayaking. GirlVentures also works with the girls on conflict resolution, and encourages them to use their newfound skills gained at camp throughout the year. GirlVentures is currently offered to 6th through 12th graders in the Bay Area. Even better? This camp isn't limited to just the summer. After-school rock climbing programs and community courses are offered throughout the school year. Donate to Girlventures here.

Young Women Empowered makes it clear that this camp is all about diversity: their campers and mentors in this Seattle-based program represent several backgrounds, religions, and sexual orientations. The organization offers programs ranging from learning how to protect the earth to writing and working in the fashion industry. The workshops aim to help these young women build their resumes and gain career skills. Young Women Empowered also never turns anyone away due to their inability to pay, so these programs are free of charge and tend to fill up quickly. Donate here.

6. Girls In The Game

Thousands of girls are stronger and healthier thanks to Girls In The Game. The Chicago-based nonprofit is changing how young girls approach sports. Instructors work with campers on getting their head in the game, while the workshops focus on establishing healthy and nutritious lifestyles.

That's especially important in Illinois, where the state requires physical education, but "school districts may apply for waivers to be exempt from the law." (Some schools have limited gym class to once a week.) Combine that with the fact that access to grocery stores is limited in some Chicago neighborhoods, and students have a number of obstacles in their path to fitness. Girls in the Games exposes campers to a wide range of sports and urges them to have a healthy body image. Donate here.

Although this camp is open to both girls and boys, Enlightened Initiative's mission is a powerful one. The organization gathers children of immigrants from low-income backgrounds in the D.C. area and makes them feel right at home. During the week-long retreat, children will increase their cultural competence and develop their communication skills. Science, Technology, and Engineering and Math (STEM) are a big priority in this program. The goal is to embrace cultural differences and get the participants excited about engaging in their community. Donate to them here.