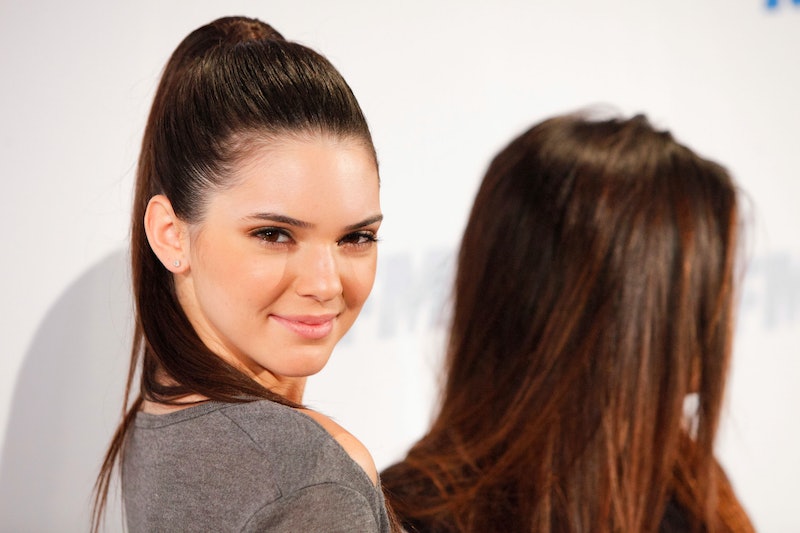 It is time, now that multiple of the non-Kris Kardashians have babies of their own, to look forward to the next generation. No, not to North West and her cousins — though they're sure to have interesting futures, (and we're fairly certain North West's gonna end up some kind of Titan) — but rather the youngest of the Kardashian-Jenner siblings. More specifically, Kendall Jenner, who just turned 18, and is apparently celebrating the occasion with an artsy pic featuring her nipples.

You can bet the pic — which Jenner posted to her Instagram account, and which can be viewed here if you are so inclined — is gonna get more than its fair share of play, both from those looking to ogle the 18-year-old and those just looking for any chance to blast the Kardashian kamp for something.

But to us, this newest picture begs a question we've had aimed in the direction of the Kardashian-Jenners for quite some time. Namely: When it comes to Kendall and Kylie, how much of their older sisters' lives are they going to emulate? And if they do, can we really blame them?

We really have no way of answering the first part of this question before, like, time progresses and stuff, but we can look at the past and we can look at the evidence: Neither Kendall nor Kylie have shown any evidence of shying away from the vamped out sexuality their big sisters (most notably Kim) project to the world. In fact, 16-year-old Kylie drew a lot of commentary a few weeks ago when she posted a rather busted-out photo to her instagram (a story we felt icky even Googling). Now, Kendall's got this artsy shot that, yes, features her nipples.

Whether they'll ever go so far as to pose for Playboy or make a sex tape (which are not at the same level, but are listed together as they are both things Kim did that got a lot of attention) is up to them, although it should be noted that Kim's sex tape was a private matter that the man she was with then decided to exploit for fame and money. That Kim decided to make the (arguable) best of that crappy situation and use it to launch her own career? That's actually kind of badass.

The reason(s) I think Kendall and Kylie will continue to keep baring their...wares? First off, they're both models, and Kendall is especially devoted to it. That world is hardly one that shies away from nudity, and in fact the shot she instagrammed today is a preview from a shoot she just did with photographer Russell James.

The second is that the Kardashian-Jenner klan is, for all their flaws, very sex-positive. Kris Jenner's flirting and gallivanting may be an entertaining thing to watch and/or laugh at, but it can't be said that she hasn't taught her daughters to be comfortable expressing their sexuality.

That the Kardashian-Jenners are then using those as centerpieces for their careers is highly debatable in its goodness or badness — and it becomes even more debatable when it comes to Kylie, who is still only 16. But it is notable that these people don't seem to fall into the classic American trap that those pesky puritans passed down to us — that of fearing sex or nudity.

Say what you will about the Kardashian-Jenners, but their relationship to their bodies could spark a freaking doctoral thesis.