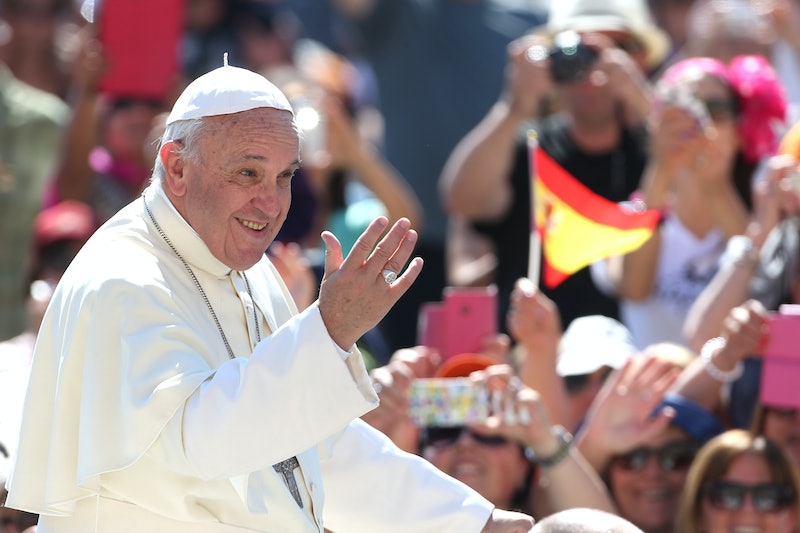 The Vatican isn't exactly known for its long lineage of progressive leaders. But ever since being anointed in 2013, it seems Pope Francis is determined to march the Roman Catholic Church right into the modern age — and he just keeps proving that fact over and over again. Take this past Sunday, when Pope Francis slammed weapons manufacturers, calling them "hypocrites" if they think of themselves as Christian. (Ouch! Don't mess with Francis.) His impassioned words have definitely made headlines and caught a lot of attention in the days since, but they're not the first time the Pope has taken firm and forward-leaning stance on everything from gay marriage to the environment.

As Reuters reports, Pope Francis was speaking to a crowd in Turin, Italy, Sunday, when he pointed out the issue with arms-dealers who somehow manage to separate their religion from the problematic ethics of their trade. "It makes me think of ... people, managers, businessmen who call themselves Christian and they manufacture weapons," he said. "That leads to a bit a distrust, doesn't it?" The Pope then directed his comments at weapons investors, as well, adding, "Duplicity is the currency of today ... they say one thing and do another."

According to the Pew Research Center, in 2014 53 percent of white Catholics are registered Republicans, a number that's trending upwards every year. But if I had to wager a guess, if Pope Francis was a registered voter (okay, and even American at all), he'd probably be leaning left. After all, his fairly radical stances don't stop at just weapons. Here are five of the the most progressive things the Pope has said so far (that make me love him even more).

1. That time he spoke out about climate change...

According to The Guardian, the Pope released a 180-page encyclical Thursday titled "Laudato Si: On Care for Our Common Home." In the letter, which was sent to the world's Roman Catholic bishops, the Pope pushes for environmental action, placing the blame for global warming on mankind, and declaring that the state of the world's climate a crisis that should not be ignored. He also points out the role that short-sighted political and economic systems have played in contributing to environmental destruction, indicating that greed is largely at fault:

Climate change is a global problem with grave implications: environmental, social, economic, political and for the distribution of goods. ... It represents one of the principal challenges facing humanity in our day.

2. ...And then pointed out the most effed up part of it all

The Pope's encyclical essay could have just devoted itself to spreading an environmental message, but he didn't just end things there. In the letter, the Pope takes it a step further and points out the issue that a lot of people miss: the inequality of who is affected by the changing environment. According to the U.N., those who contribute the least to climate change actually suffer the most — in other words, those with least amount of resources in the most impoverished countries. Of this, the Pope writes:

In different ways, developing countries, where the most important reserves of the biosphere are found, continue to fuel the development of richer countries at the cost of their own present and future. ... The developed countries ought to help pay this debt by significantly limiting their consumption of non-renewable energy and by assisting poorer countries to support policies and programs of sustainable development.

3. That time he was totally cool with gay marriage

If a person is gay and seeks God and has good will, who am I to judge?

It was July 2013 when Pope Francis first shared his open-minded views on gay marriage to reporters, while on a flight from Brazil to Rome. And while it's not exactly an endorsement of gay marriage, it's a radical stance for a pope to take, and a huge departure from what his predecessors would have said. It also shows for the first time in history that the Catholic church may be moving towards gay marriage acceptance — which is huge.

4. When he called out the ridiculousness of the gender pay gap

In April, the Pope denounced the gender-based pay gap to thousands in St. Peter's Square, which helped raise awareness of an ongoing issue happening here at home as well as abroad:

Why is it expected that women must earn less than men? No! They have the same rights. The disparity is a pure scandal.

In case you need a refresher, WhiteHouse.gov reports that women earn 77 cents for every dollar their male counterparts are paid. So, yeah, "pure scandal" pretty much hits the nail on the head.

5. When he proved he knows a thing or two about the economy — and what we've got all wrong about it

In December 2013, while writing his first papal exhortation, the Pope also dove into various economic issues, including the income gap. And it was pretty clear real fast that he isn't exactly a big fan of capitalism. In fact, he makes it clear that he believes capitalism breeds social inequality, and has a lot of feelings on the whole matter:

In this context, some people continue to defend trickle-down theories which assume that economic growth, encouraged by a free market, will inevitably succeed in bringing about greater justice and inclusiveness in the world. This opinion, which has never been confirmed by the facts, expresses a crude and naïve trust in the goodness of those wielding economic power and in the sacralized workings of the prevailing economic system. Meanwhile, the excluded are still waiting.

Yep; Pope Francis might just go down in history as one of the most badass pope's the world's seen yet. Less than two years at the helm of the Vatican, and this guy's already thrown down on climate control, gay marriage, and now arms dealing? Looks like the Roman Catholic Church is making some major moves — and it's about time.

More like this
How To Fight For Reproductive Rights, Based On How Much Time You Have
By Courtney Young
Twitter Was Saying The Same Thing About Sam Ryder’s Surprising Eurovision Result
By El Hunt
10 Times Boris Johnson Got It Wrong On Trans Rights
By El Hunt and Sam Ramsden
Rebekah Vardy & Coleen Rooney’s Trial Has Officially Begun
By Bustle UK
Get Even More From Bustle — Sign Up For The Newsletter