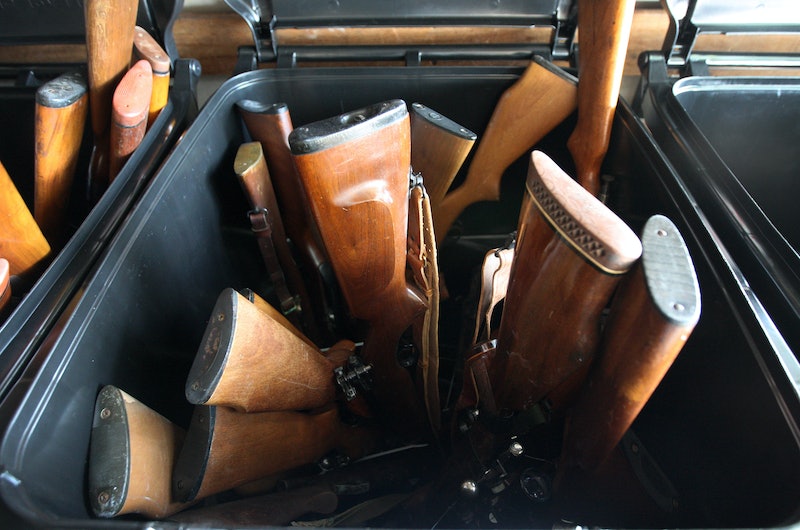 In the wake of the tragic mass shooting in Charleston, South Carolina, last Wednesday, where a 21-year-old with supposed anti-black beliefs allegedly murdered nine prayer meeting attendees, debate has arisen over whether new gun control legislation should be re-introduced at the federal level. The Second Amendment issue has always drawn vigorous discussion between those concerned over constitutional freedoms and the protection of innocent lives, and with the spotlight turned on the recent influx in violent crime and police-shooting deaths, the latest query is no different. As calls for an increase in gun education begin ramping up, with many claiming that putting firearms in the hands of the victims may actually stem that violence, the most pervasive question remains: does owning a gun actually make you safer?

"I don't think it's an answer, [to] remove guns from society," said former Bush adviser Karl Rove during a sit-down with Fox News Sunday's Chris Wallace over the weekend. Rove added that "I wish I had an easy answer for that" though, and called the Charleston shooting a "racist, bigoted evil" attack.

Rove may have missed the mark, however, considering that the discussion of gun control is so often skewed one way or the other that shunting it to the side often opens up more questions than answers. Rove wasn't alone in wanting to nip the gun discussion in the bud either.

Whether or not Rove and Cruz want to talk about it, the need for an informed discussion on guns in terms of their ability to protect citizens is more than warranted. Here's what the statistics say to date:

In a tweet sent out on Saturday, President Obama urged Americans to reconsider the idea that gun ownership equated to personal safety.

"We kill each other with guns at a rate 297x more than Japan, 49x more than France, 33x more than Israel," tweeted Obama. The message incited a stream of angry rhetoric, from Twitter users claiming that citizens needed firearms to "defend themselves," to those who claimed that the majority of gun-related deaths stemmed from those who had committed suicide.

That argument may actually hold somewhat: according to the CDC, over 20,000 gun-related deaths in 2013 were labeled as suicides, while homicides and violent assaults came in at just over 11,000. But 11,000 is still a number too critical to ignore.

According to a July 2012 report by The Guardian, which culled its information largely from the Small Arms Survey and the U.N. Office on Drugs and Crime, the United States currently holds the record for highest civilian firearms ownership, at a rate of 88 guns for every 100 people. And although the firearm homicide rate did not stack up as the worst in the world, it still ranked among the top 28, falling behind countries like Honduras and Sierra Leone, at around 2.97 gun-related homicides per 100,000 people.

Some might argue that gun advocates aren't wrong then — there are still 27 countries ahead of us on the meter when it comes to firearm ownership versus firearm homicides — but it also means that gun control advocates are also onto something vital. More important than that, it proves that arming the civilian population won't do much in the way of protecting us either.

A November 2012 Justice Department report indicated that while the number of firearms stolen from private property may have dropped significantly between 1994 and 2010 (statistics showed a decrease from 283,600 thefts to 145,300 within that time frame), that means that an overall total of some 1.4 million guns had been stolen in a span of 16 years. Many of those thefts, reported the Justice Department, went unrecovered — meaning that nearly 80 percent of the stolen firearms were still out there somewhere, likely in the hands of those with more hostile intentions.

When compared to the nearly 300 million guns owned by American citizens, that number is just a drop in the bucket — but it also means that over 1.1 million guns have been taken from their legal, well-meaning owners — and isn't that what many pro-gun advocates say is the point of purchasing a firearm in the first place?

If nothing else, those stolen guns are actually more of a concern than a comfort. A study conducted in the early '90s by the Justice Department showed that, on average, anywhere from 38 to 40 percent of prison inmates had acquired the gun they used in a violent crime through theft or secondhand illegal markets (which often sell firearms stolen from private owners).

So whether you purchased a gun or not, your safety may actually lie in how responsible the people around you are — and with a number like 1.1 million hovering overhead, you probably shouldn't get too comfortable.

In 2009, the University of Pennsylvania conducted a study of over nearly 700 unique shootings and came to one very important conclusion: those carrying guns are 4.2 times more likely to be killed during an attack than those who are unarmed. It was a baffling conclusion that flew in the face of any basic logic — wouldn't having a sidearm actually prevent an intruder or an assailant from hurting you first?

Apparently not. According to Prof. Charles Branas, who authored the study, although the number may have had something to do with the type of person carrying a gun (in this case, a portion of those toting a firearm had criminal histories), it was far more likely that the person carrying the firearm would overreact or fall victim to a skewed sense of entitlement — or perhaps they would simply venture into areas where they normally wouldn't. Either way, said Branas, the numbers didn't lie. Packing heat actually increased your chances of bodily harm.

Additionally, a 2011 study in the American Journal of Lifestyle Medicine indicated that those who kept guns in their home were at a much higher risk of being harmed with them. Wrote study author David Hemenway:

Given the vast quantities of data at our disposal, the debate over gun control in the wake of the Charleston mass shooting should be considered with not only the victims in mind, but those future victims that have not yet been given a voice. All that's left now is for those in power to speak up.