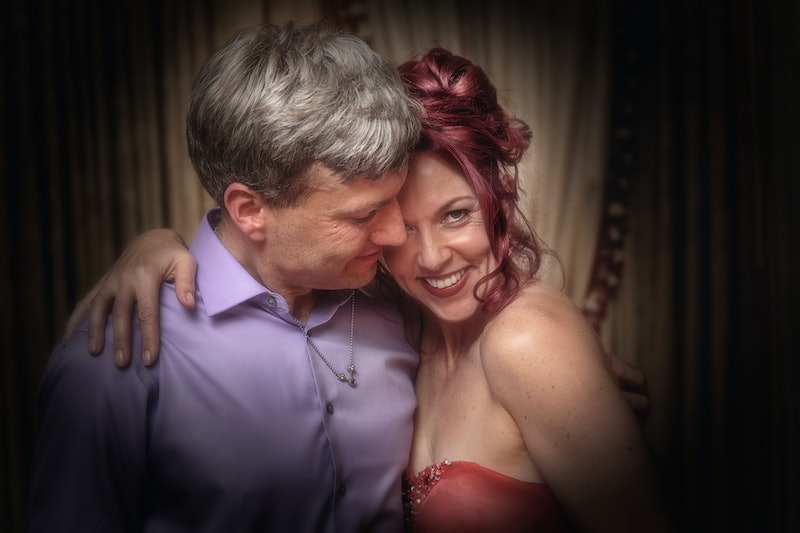 For some people, perhaps, having an open marriage is a concession. Perhaps cheating comes to mind; you imagine that after infidelity, a couple has made a new vision of their marriage. These are marriages that “make- do” after the scar tissue has healed. But frankly, that isn’t the way it’s done in mypolyamorous community, or my open marriage.

My situation is not at all about concessions. For me, sex with someone else is not a deal breaker. Being intentionally cruel, not taking care of our family, disrespecting me, and lying — all constitute deal breakers. But occasionally “stepping out” may just be part of our biology.

It all started a year ago, when my husband and I decided to go on an adventure. I wanted to have sex with a woman, not having done so in many years. The whole idea both titillated my husband and scared him a bit. We discussed what would make him feel safe and comfortable, and when he gave me the green light, I met a lovely woman online.

Bonnie, like me, was married and bisexual. We decided to meet at a local pub. There was an instant attraction. After half an hour of sipping martinis and flirting, we discovered that both of our husbands were parked close-by, nervously awaiting news of what was happening.

Sometimes, sleeping with new people is a measuring stick of how connected you are to your spouse.

Giggling, we texted them to join us. What followed was a new friendship between all of us. This is what I love about open marriage — the unpredictability. I was not expecting to be completely enchanted by her husband. Bill was so sex-positive and supportive about Bonnie exploring her newly confessed attraction to women. Bonnie had unintentionally “come out” at a BBQ the year before when she made out with her best friend — ironically, in a walk-in closet upstairs. While Bonnie’s best friend’s husband was angry and mortified, Bill was loving and supportive, encouraging Bonnie to explore this new part of her sexuality.

The four of us had some great dates together. Eventually, time and family commitments slowed down our contact. But it was an adventure I’ll always cherish for many reasons — one of the main ones is that it heightened the love and trust between me and my husband. People assume that you get the excitement from the outside sexual encounters — and you sometimes do. But, as we explore who we are and what we desire, openness keeps the mystery alive between my husband and me.

The morning after our first date with Bonnie and Bill, my husband and I were snuggling and talking about how surprisingly fun and drama-free the evening had been. Our hearts were so open with the realization of how much we loved each other. Sometimes, sleeping with new people is a measuring stick of how connected you are to your spouse.

I am the last person alive who’d try extreme sports — I can barely grasp the need to risk your life in an effort to feel more alive. But there is an allure in the emotional skydiving of allowing your mate to be sexual with someone else. There’s exhilaration in moving through the fear of the potential loss of the relationship that, for us, is often followed by an all-consuming gratitude for each other; a gratitude that can get lost in the shuffle of mundane life.

I believe that the second wave of polyamory has a distinctly feminist bend to it. In most poly-marriages I know of, the woman is not a “victim,” but many times the initiator.

My open marriage improves my connection with my spouse. It is an intentional way to evolve together, a way to create spaciousness in our connection while also maintaining a deep bond.

Yesterday, I was talking to an acquaintance about my open marriage. She stated flatly “No one enters their marriage expecting they’ll open it.” She assumed I opened my marriage because it was flawed. Her concept of open marriage was that it was a patch job post “cheating”—a second best set up, built on the belief that passion fades, all relationships sour, and a series of necessary concessions have to be made, one of them being sex with other people.

Her thinking is fairly pervasive and a complete misread on most open marriages I know of. My open marriage improves my connection with my spouse. It is an intentional way to evolve together, a way to create spaciousness in our connection while also maintaining a deep bond. In my mind, the challenge of sustaining the vitality in long-term relationships lies in fostering the opposite qualities of passion versus stability, and wildness versus predictability. My interest lies in maintaining both ends of the spectrum, and openness in my marriage is one of the many tools I use to achieve this goal.

Every open marriage is different, just as monogamous marriages are varied. People have different philosophies and motivations. For me, I want the freedom to create a marriage based on my value system — not someone else's.

It’s a delicate balance to create stability and excitement in a marriage. There is a tipping point for me; to make it work I need trust, clear agreements, and lots of communication. I’ve often imagined if my house or phone were tapped by surveillance cops, they’d sit in a bored stupor listening to hours of my husband and I conversing about the nuance of our feelings, needs, fantasies, thoughts — they’d surely beg for the "good old days" of surveilling the mafia.

But it is this nuanced conversation that keeps my marriage fresh. Recently, my husband and I discussed what we would “allow” each other on separate upcoming business trips. After nearly an hour of checking in on how we both felt, the general state of our marriage, if the majority of our needs were being met sexually, emotionally, astrologically (kidding), we both agreed that we weren’t connected enough currently. What we really needed was a vacation together. The timing of our trips wasn’t good for us — and if we “hooked up” with other people, it could potentially cause hurt feelings. I only take calculated risks in my marriage. I am all about checking if there’s water in the pool before doing a spectacular high dive.

People have said to me “Open marriage seems like so much work! I couldn’t be bothered to put so much time into an open marriage.” But the art of the relationship is something I feel devoted to. When you love something, you spend time caring for it.

Aristotle said “We are what we repeatedly do. Excellence, then, is not an act, but a habit.” I want to be in the habit of investing energy into the art of love, passion, and a continued sustaining bond with my husband. And for me, that means putting sleeping with other people on the table.

Gracie X is the author of "Wide Open: My Adventures in Polyamory, Open Marriage, and Loving on My Own Terms ”, available wherever books are sold in September 2015.