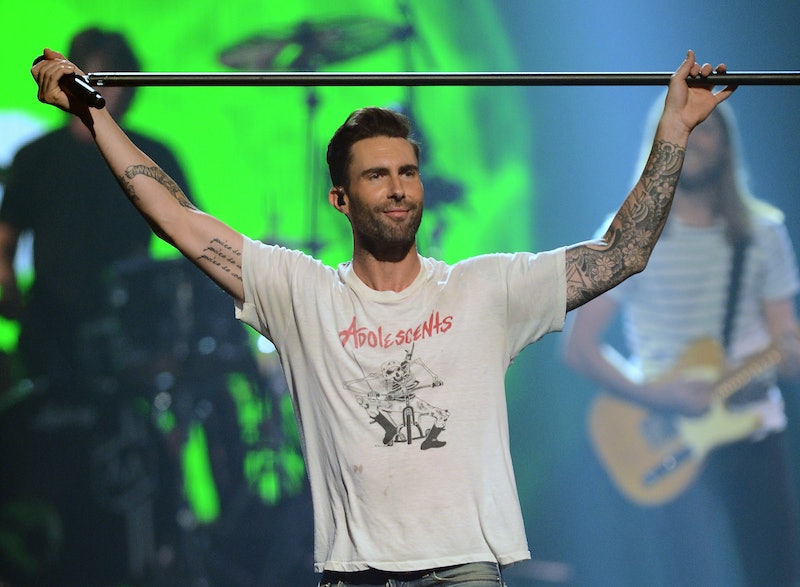 He moves like Jagger, he likes to diss on Blake Shelton (although all in good fun, we think), he's part of a band named after a color and a number, and it's finally official: Maroon 5 lead singer Adam Levine has been named People's sexiest man alive. The announcement was made in front of a live audience on The Voice Tuesday night, the show where Levine is one of four singer/songwriter judges. But unless you've been living under a rock for the past week, you already knew this was coming. Gossip Cop, a website whose slogan is "busting bad dish," scooped the story five days ago, prompting the internet to swiftly self implode.Another year without Ryan Gosling? How could it be? And what about other hugely sexy/successful men of 2013 like Idris Elba, Chris Hemsworth, or Tom Hiddleston?

But alas, we are stuck with Levine, the gangly Los Angeles enthusiast with a penchant for tattoos and Victoria's Secret models, who, albeit being attractive to some, has also elicited a fairly nasty response from others. But unless RyGos decided he would let the magazine use his image as their sexiest (something he has not offered his approval of, because he's too sexy to be People's sexiest, obvi), there are bound to be complainers. Take a look at what some are saying on Twitter:

Here is the People cover, in all of its tattooed glory:

Levine said of his "crowning":

"As a musician, you have fantasies that you want to win Grammys, but I didn't really think that this was on the table. I was just amazed and stunned and it almost seemed like they were kidding, but they weren't, so that's cool."

OK Adam, let's take a deep breath and calm down. And put some clothes on, will you?