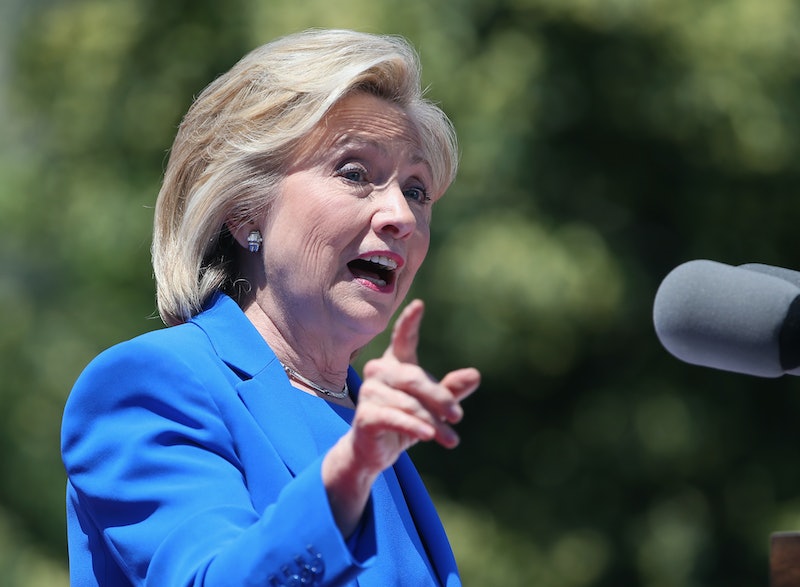 On Tuesday, Democratic presidential candidate Hillary Clinton called for South Carolina to remove the Confederate flag from its state house, saying that the emblem of the South’s racist past shouldn’t fly anywhere. Clinton broke her silence on the issue when speaking at an African American church in Missouri, just outside of Ferguson, where protests against the police shooting of an unarmed black teenager, Michael Brown, sparked a nationwide fervor last fall. Her potent critique of the Confederate icon stood out from the noncommittal reactions from GOP presidential contenders have offered in the days after Dylan Roof, a 21-year-old white man, allegedly shot and killed nine African Americans at a prayer meeting last Wednesday in Charleston’s historic Emanuel African Methodist Episcopal church.

The former New York senator’s remarks at Christ the King church were the first she had offered in response to what appears to have been a racially motivated hate crime against the black community. She furthermore welcomed retailers like Amazon, eBay, and Walmart for banning the sale of merchandise that bore the racist red, white and blue flag as the nation wrestles with its continuing racial divisions.

"That night, word of the killings struck like a blow to the soul," Clinton told the crowd. "How do we make sense of such an evil act — an act of racist terrorism perpetrated in a house of God?"

But Clinton acknowledged that tackling the symbolic legacy of Dixie and its racist exploitation of black labor and terrorization of black bodies would require more than simply pulling down a piece of bunting.

"It's tempting to dismiss a tragedy like this as an isolated incident, to believe that in today's America, bigotry is largely behind us, that institutionalized racism no longer exists," Clinton said. "But despite our best efforts and our highest hopes, America's long struggle with race is far from finished. We can't hide from hard truths about race and justice. We have to name them and own them and change them."

The message throughout her speech focused on the importance of extending real opportunity, not just the formal promise of it, to poor and marginalized communities on both sides of the color line. Pointing to her mother's story of working her way through high school on her own, she spoke about how America needs to give helping hands to people struggling to make better lives for themselves.

"Her own parents abandoned her," Clinton said. "By 14, she was out on her own, working as a housemaid. Years later, when I was old enough to understand, I asked her, 'What kept you going?' Her answer was very simple: Kindness along the way from someone who believed she mattered."

Clinton also spoke candidly about growing up in "an all-white, middle class suburb" and about her trip to Chicago as a teenager to see Rev. Dr. Martin Luther King, Jr. speak:

Dr. King challenged us to stay engaged in the cause of justice, not to slumber while the world changed around us.

To combat America's race problem, Clinton argued, we can't be content with the symbolic victories over the Confederacy; we also have to overturn the economic and political straitjackets that it has left the country trapped in. She then pushed for a number of initiatives to redress racialized disadvantage and mistreatment, including economic investment in poor and marginalized communities, better childcare support and education, stronger gun controls and law enforcement reform.

Clinton is one of the few presidential candidates tackling the problem of the Confederate flag head-on. Her GOP competitors have thus far been reluctant to characterize the Charleston shooting as racist or as an act of terrorism. Instead, many contenders in the Republican field, including Texas Sen. Ted Cruz, businesswoman Carly Fiorina, former Arkansas Gov. Mike Huckabee, Louisiana Gov. Bobby Jindal, Texas Gov. Rick Perry, Florida Sen. Marco Rubio, and former Pennsylvania senator Rick Santorum, have said that the decision should be left with the people of South Carolina.

"I think the people of South Carolina should sit down and have an intelligent discussion about what can they use that captures their heritage, captures the heritage of America and allows them to coexist in peace,” Rubio said last week.

South Carolina Gov. Nikki Haley, a Republican, called for the flag’s removal Monday. Haley referenced personal reasons for her decision rather than pointing to the political statement of exclusionary racial pride expressed by the flag’s continued use. According to South Carolina statutes, only the state legislature can vote to take down the Confederate marker.

After Haley came out against the flag, a number of GOP politicians followed suit. South Carolina Sens. Lindsay Graham and Tim Scott, both Republicans, have also joined the governor’s calls for the state legislature to return to session and remove the flag.

In turn, Jeb Bush, a GOP frontrunner who ordered the Confederate flag taken down when he was the governor of Florida, signaled that South Carolina should follow his state’s example. Bush and Wisconsin Gov. Scott Walker both voiced their support for Haley on Twitter.

Tuesday’s campaign stop was not the first time that Clinton has spoken out against the Confederate flag flying over South Carolina. When campaigning for the Democratic nomination for president back in 2007, Clinton had said that she would prefer to see the Dixie emblem taken down. In the years since, she has not directly addressed the issue of the entrenched Confederate symbolism at many state legislatures across the South.

Given the national dialogue that has erupted over the racial fault lines that continue to split the country over the past ten months, it is no surprise that Clinton is making an effort to talk directly about race and the continuing inequalities and brutalities that condition the life chances for black communities in the U.S.

On the campaign trail, she has taken strong stances on many issues that are pivotal to African American voters, including voting rights, economic inequality and police reform. When speaking to college students at the historically black Texas Southern University in Houston in June, Clinton called for the automatic and universal registration of all voters, the expansion of early voting to nights and weekends and the repeal of laws that disenfranchise people convicted of felony crimes — all reforms that would broaden the franchise and make it easier for low income and minority voters to get to the polls.

“We have a responsibility to say clearly and directly what’s really going on in our country,” Clinton said in June, “because what is happening is a sweeping effort to dis-empower and disenfranchise people of color, poor people, and young people from one end of our country to the other ... We should be clearing the way for more people to vote, not putting up every road-block anyone can imagine.”

For the moment, Clinton’s promises and her rhetoric around the issue of institutional racism seem to be making inroads among African American voters, a key constituency for Democratic presidential hopefuls. According to recent NBC/Wall Street Journal poll data, she now sits at an 81-3 percent favorable/unfavorable rating among black voters, only marginally lower than President Barack Obama’s 86–2 percent rating. Just a few months ago, Clinton only enjoyed a 73 percent approval.

And the African American vote could play a major role in Clinton’s chances at securing first the Democratic nomination, let alone the White House. As Vermont Sen. Bernie Sanders continues to draw huge crowds at campaign stops, she may need to shore up support in communities where Saunders remains a virtual unknown. So far, as The New York Times notes, Sanders has not made much of an effort to take his economic populism to black constituencies.