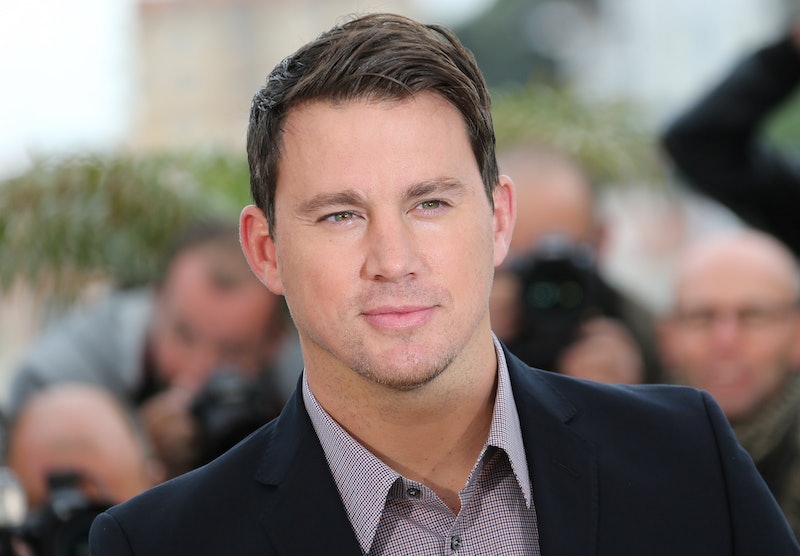 Channing Tatum may be one of Hollywood's hottest actors today, but his favorite role is not one that he plays on-screen. Fresh off of wrapping up his new movie Magic Mike XXL , which comes out July 1, he dished more on his role at home. In a new interview with People, Channing Tatum opened up about marriage and fatherhood and made it clear that he really loves his home life.

The actor revealed the blissful chaos that comes with managing a sizzling hot career and domestic life with his wife, Jenna Dewan Tatum, and the couple's two-year-old daughter. Though the 35-year-old does not find balancing acting and his home life easy, he said it is still everything he wanted. And his family now plays a factor in his work. Whenever he takes on a new project, he told People that he asks himself, "Is this worth taking time away from them?"

Aww! The Magic Mike star obviously has his priorities straight. Anyone who follows what goes on in his life knows that he cares deeply about his family, so it's not surprising to hear more about what a big role they play in his decision making. But still, it is worth celebrating an actor who puts family first and who is not afraid to gush or brag about the most important people in his life.

On Making A Marriage Work

"Jenna's and my thing is checking in with each other all the time, like 'On a scale from 1 to 10, how much do you love me right now?' And you gotta be honest, and you've got to want an honest answer. I told a friend to do that. He asked the question and it turned into a huge fight, and I'm like, that's kind of the point. Obviously, something needed to be fixed, he needed to be aware of it, and she needed to get it off her chest," he dished to Cosmopolitan in 2013.

"Dance battles do sort of happen, to be honest. When we wake up in the morning we put on music, and while Everly's eating we dance and it just starts to get stupid. Changing the baby is an intermission — but our daughter hates getting her diaper changed, so it's almost like a break-dancing battle to get it on her. As soon as you lay her down, she's bridging out of it and doing some jujitsu windmill. It's pretty intense," he said to Redbook in 2014.

On His First Kiss With His Wife

"We were basically together on the movie. It's interesting now, because we can watch it and see; we can go, 'Oh, wow, that was actually our real first kiss.' As soon as the movie wrapped, we went back to L.A. and were together, and together ever since — never broken up. That's nine years… It felt different in that cameras and about 30 sweaty grips were all around — but not really. I don't know how to explain it. It definitely counted. We were both obviously reeling from it. And we liked it enough to keep coming back," he continued to Redbook.

On Admiring His Daughter

"She just got her first tooth," Tatum told Ellen DeGeneres in 2014. "It's the cutest thing. Razor sharp. I think she's going to be cutting me very soon, but it's as cute as can be."

On Protecting His Daughter

"I don't judge anyone that (sells baby photos). We just didn't want to. Part of me wants to take a thousand pictures and hold them up for the world to see, but I don't want her to have to deal with that," he said to USA Today in 2013.

On Watching His Wife Give Birth

"I probably went to the bathroom four times and had a crying fit. There is a real reason why God did not give, like, (men) this ability to have babies," Tatum said to Chelsea Handler. "Because we would not be able to do it. You guys, I don't know how you do it. It's a real thing. It's like 'National Geographic animal-style, for real. I don't get it."

On What His Wife Taught Him

"I was having a lot of anger in me. 'I hate this industry,' or whatever. Because it was frustrating. When things aren't easy, you go, 'Oh, I don't need this.' And I think [Jenna] made me realize that that was really just me being afraid… Of not getting what you want. When you feel someone else is in control of your life, of your destiny or your future, that can be very scary," he said to The Hollywood Reporter in 2014.

On What He Knows Is True

"She keeps us all sane. Jenna puts everything in perspective for me, always. I'll find myself spinning out or angry or whatever, or even happy, and she always somehow ends up righting the ship," he said at the Foxcatcher premiere in 2014.

We'll have to look forward to hearing more quotes from him about his family. You know there will be many down the line!