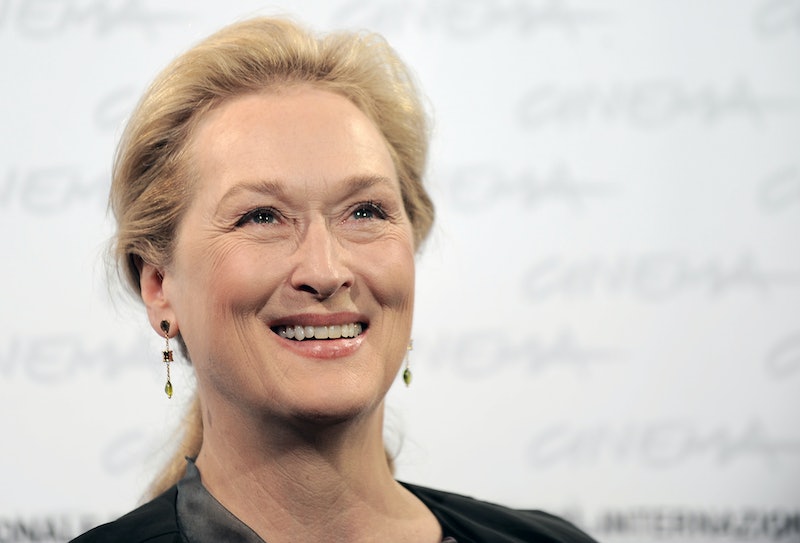 The impossible just happened: Meryl Streep became even more fierce. Most people know her as one of the greatest actresses of all time (or, simply, Miranda Priestly). But many might not be aware that Streep is also a force to be reckoned with off-screen — particularly when it comes to advocating for equal rights and female empowerment. And never was that more apparent than this week. According to The Washington Post, Meryl Streep sent letters to every member of Congress Tuesday asking them to reintroduce the Equal Rights Amendment of 1972 into the U.S. Constitution. Her actions, while amazing all on their own, have her joining the ranks of many other influential women throughout history who have personally called on Congress to support equal rights.

On Tuesday (which just so happened to be one day after her 66th birthday), Streep reportedly mailed out her letter to all 535 members of Congress. Also included in each package? A copy of the book Equal Means Equal, written by Jessica Neuwirth, President of the ERA Coalition, an organization whose mission it is to ratify the amendment. In the letter, Streep appealed to each member personally:

I am writing to ask you to stand up for equality — for your mother, your daughter, your sister, your wife or yourself — by actively supporting the equal rights amendment.

She also emphasized the importance of resurrecting the amendment:

And she took time to remind Senate members that such an amendment wouldn't only benefit women:

The ERA is not just a women’s rights issue; it will have a meaningful benefit for the whole human family.

If you need a little brush-up on the Equal Rights Amendment of 1972, it stated that, "Equality of rights under the law shall not be denied or abridged by the United States or by any State on account of sex." That seems like such an obvious amendment to have, that it's almost baffling that it's not part of the Constitution. But Streep's recent letter is proof that the battle for equal rights is a long one, putting her side-by-side in history with countless other fearless women in history — like those who demonstrated for the right to vote before women's suffrage was added to the Constitution in 1920. Take a look at some of the other brave women who have written to Congress in the name of equal rights.

On March 31, 1776, Abigail Adams wrote a letter to her own husband, John Adams, asking him to "remember the ladies" when fighting for independence from Great Britain. Technically, there was no Congress then, but writing a Founding Father of the United States certainly counts as appealing to the government. In the letter to her husband, Abigail wrote:

I long to hear that you have declared an independency. And, by the way, in the new code of laws which I suppose it will be necessary for you to make, I desire you would remember the ladies and be more generous and favorable to them than your ancestors. Do not put such unlimited power into the hands of the husbands. Remember, all men would be tyrants if they could. If particular care and attention is not paid to the ladies, we are determined to foment a rebellion, and will not hold ourselves bound by any laws in which we have no voice or representation.

In 1872, when it was illegal for women to vote, Susan B. Anthony decided to do just that — she voted in the presidential election in Rochester, New York, in a bold move to test what would happen if a woman cast her ballot. And she soon found out. Anthony was arrested for "knowingly, wrongfully and unlawfully vot[ing] for a representative to the Congress of the United States," and fined $100 (a huge sum in those days). Two years later, Anthony petitioned Congress and requested that "the fine imposed upon your petitioner be remitted, as an expression of the sense of this high tribunal that her conviction was unjust."

In more recent history, the Older Women’s Economic Security Task Force (OWES), which is part of the NCWO, sent a letter to Congress in 2011, urging them to consider three pieces of legislation that would help strengthen Social Security. Those three bills included the Keeping Our Social Security Promises Act (introduced by Sen. Bernie Sanders), the No Loopholes in Social Security Taxes Act, and the Preserving our Promise to Seniors Act. The first two would help ensure that Social Security remain solvent for at least 75 years, while the third would help protect senior citizens from rising costs of living.