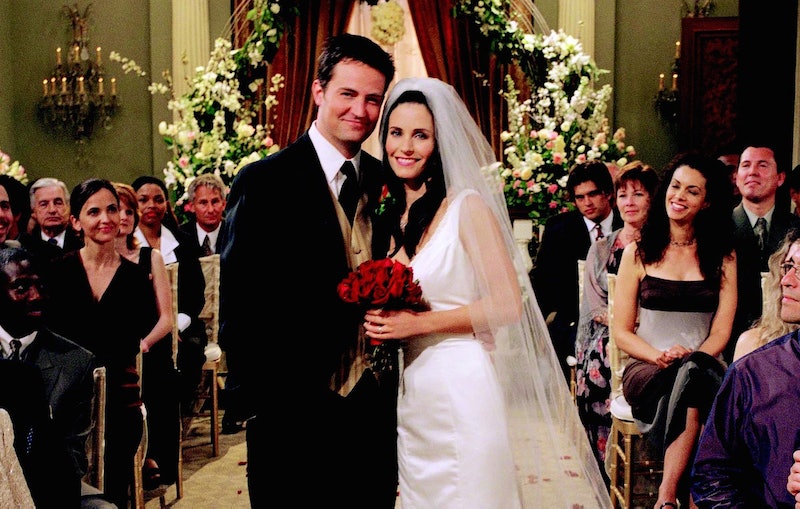 As far as TV relationships go, I've always wanted a partnership like Monica and Chandler on Friends. Many people fall in love and then realize the person they're with is also their best friend, but these two did it backwards. They knew everything about each other, flaws and all, and still loved each other — that's the real deal. Ross and Rachel might have gone through the most ups and downs on the show, but Monica and Chandler's less dramatic, more fun dynamic made them my favorite Friends couple. Over the series' 10-year run, we got to see them realize how perfect they are for each other. And the best way to celebrate their love? Looking back at a timeline of Monica and Chandler's relationship on Friends — along with re-watching their best episodes so you can relive the magic, of course.

So it all started in London, right? Wrong. The chemistry between Monica and Chandler was always there, from the first season of Friends and even before, thanks to the hilarious flashback scenes that detailed what happened to the gang in their college days and showed how much history the two shared before fans ever met them. Really, it all started with Thanksgiving 1987, and here's exactly how things progressed.

Season 5, Episode 8: "The One With All The Thanksgivings"

Monica and Chandler knew each other before the events of the Friends pilot because Chandler and Ross were college roommates, and since Chandler was The Boy Who Hates Thanksgiving, he always spent it with the Gellers instead of his family. As legend has it, Monica had a crush on Chandler, and then overheard making fun of her weight... which led to her accidentally cutting off his toe. Oh, and she became a chef because Chandler complimented her mac and cheese-making skills. So essentially, it was destiny.

While at the hospital waiting for Ben to be born, Monica got a bad case of baby fever, so Chandler proposed that if they're both still single at 40, they'll get together and have a baby. Newsflash: They will both be married at 40, and it will be to each other. What did I say? Destiny!

When Monica complained about being perpetually single, Chandler offered to be her boyfriend... and Monica thought it was hilarious. Obviously, Chandler spent the rest of the episode trying to convince her that he'd make an excellent boyfriend. Is it just me, or did he totally have feelings for her this entire time?

Exactly one season later, Monica and Chandler slept together for the first time and started dating in secret, even though they intended for their fling to stay in London. But when they got back to New York, they just couldn't help themselves.

Joey was the first to find out that Monica and Chandler were dating, which made for some seriously hilarious storylines, like when Joey had to pretend to be a huge creep to help the couple keep their cover.

Season 5, Episode 11: "The One With All The Resolutions"

Rachel was the next to find out when she overheard Monica and Chandler on the phone making plans to meet up in secret. This storyline could never happen in 2015, because no one has house phones anymore. I miss the '90s!

Season 5, Episode 14: "The One Where Everybody Finds Out"

Phoebe found out in this episode, and it was the best. She was touring Ross' new apartment and saw Monica and Chandler hooking up through the window. I can't do this clip justice, so please just watch and relive it with me. And then, later in the same episode, Ross found out, and at first he was totally freaked out — until he quickly fell in love with the fact that his best friend and sister were dating. Happy ending!

Having decided not to tie the knot in Vegas, Monica and Chandler chose to take a smaller, but still meaningful next step in their relationship: Moving in together. Remember when Chandler was a total commitment-phobe? Mr. Bing is actually growing up!

Monica found out that Chandler was going to propose to her after an awkward run-in with Richard ruined his initial plan, so she decided to propose herself. If you didn't cry the first time you watched this scene, you're a liar.

Season 7, Episode 23: "The One With Monica And Chandler's Wedding"

And these two Friends lived happily ever after. You know, after Chandler freaked out and tried to run away...

More like this
24 Years Ago, 'Friends' Dropped Its Most Underrated Ross & Rachel Episode
By Grace Wehniainen
Dixie D’Amelio & Noah Beck “Love Each Other” Despite Breakup Rumors
By Julia Emmanuele, Jordyn Tilchen and Grace Wehniainen
Clayton & Susie Broke Up, Citing "A Significant Amount Of Pain" After 'The Bachelor'
By Jordyn Tilchen
Netflix Reveals First Look At Wednesday In The 'Addams Family' Spinoff Series
By Bustle Editors
Get Even More From Bustle — Sign Up For The Newsletter