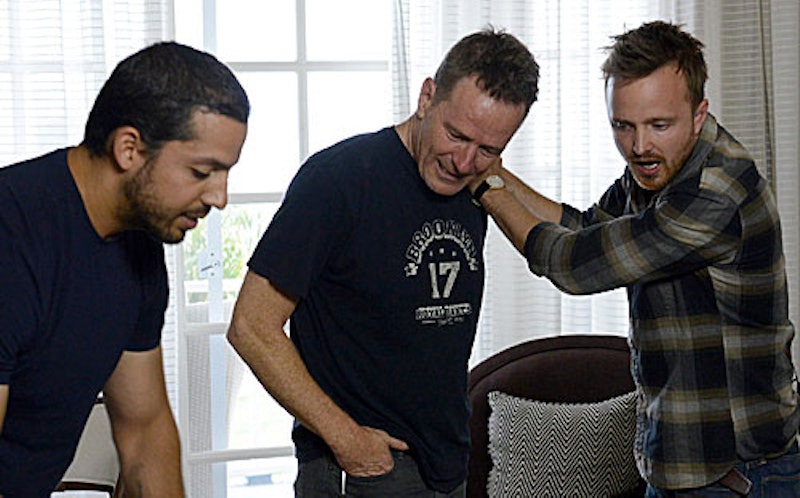 The late '90s were the glory days for not only boy bands and your pair of low-waisted jeans, but also for David Blaine. The magician (or, should I say, illusionist ?) transformed the art for a new generation, elevating (and levitating) it past just simple card tricks, coin tricks, and long ribbon tricks that you could buy at your local drug store. With TV specials like 1996's David Blaine: Street Magic and 1998's David Blaine: Magic Man, the magician fascinated a viewing nation that previously wrote off magic the moment David Copperfield claimed to make the Statue of Liberty disappear. Heck, the fact that Titanic star Leonardo DiCaprio was even along for the ride made Blaine cooler than Jack Dawson himself. So how refreshing it was on Tuesday night to see David Blaine make his return in David Blaine: Real Or Magic on ABC.

Because, between the late '90s and 2013, Blaine had decided to trade his penchant for shocking citizens with street magic for high-octane endurance competitions. Like a marathoner who simply decided the 26.2 miles — and the subsequent Ironman race he ran — wasn't enough, Blaine tried to go the distance, freezing himself in a block of ice and electrocuting himself for 72 hours. The mystery of his magic feats were gone — all we saw looking at Blaine submerge himself in water for seven days was a man putting his training on display. We might have been impressed by his ability to cheat death — but most of us left these stunts wondering: Why even try to cheat death at all?

No doubt, the magic was gone. Blaine's street tricks, at one point, seemed unsettling easy for him. It was far less fun to watch him struggle. So what a relief, on Tuesday night, that he returned to the street, and proved why he was famous in the first place. For once, audiences were impressed with the magician. Just look at how Twitter responded to the Real or Magic special:

Compare those with tweets with 140-character criticisms from 2012, during Blaine's David Blaine: Electrified stunt:

So, now we know what this means: David Blaine is officially back. Back where we always wanted him in the first place — on the street, doing magic, actually talking to normal citizens instead of showcasing himself on a stage. And in the houses of those who should be the most cynical about magic, having spent their years surrounded by CGI and fantasy: celebrities. Sure, there was no Leonardo DiCaprio this time around, but who didn't chuckle with glee watching Bryan Cranston and Aaron Paul lose their shit over Blaine's tricks? (Whatever helps me imagine an alternate universe where Jesse and Walt are best buds is fine with me.)

Yes, Real Or Magic proved that Blaine is cool outside of a box buried underground, or a box elevated high in the sky. It also proved that he doesn't bleed, can make words appear out of fire, and can actually do the impossible: silence Kanye West. And, for that alone, he certainly deserves a spot in pop culture relevancy.