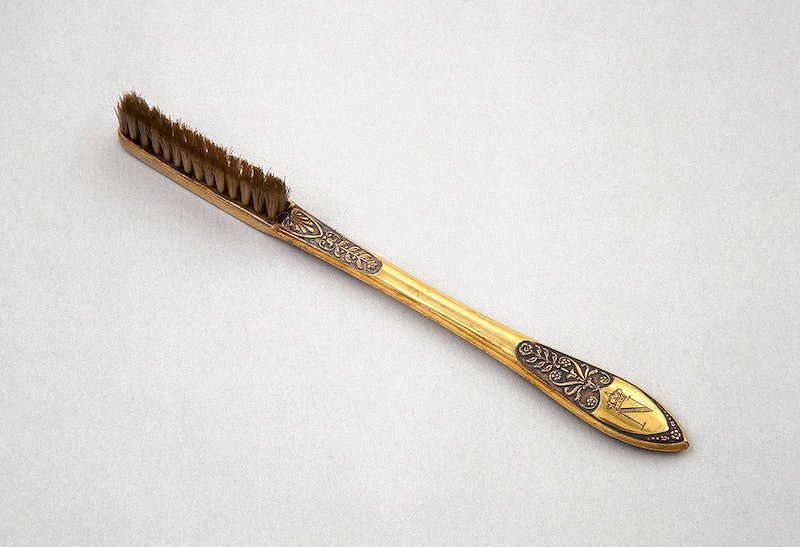 Though we probably consider tooth brushing more a part of our beauty regimes than our prehistoric ancestors did, ancient tooth brushing — no matter how different from our modern day equivalent — has been alive and well with some interesting techniques through the centuries. No matter how annoying you found brushing your teeth before bed as a child (or perhaps how much of a chore you still feel it is as an adult), you're going to appreciate the fact that your synthetic toothbrush and modern toothpaste are things you have access to when you read about some of the ways brushing one's teeth was accomplished thousands of years ago.

It's good to know that humans throughout time have always considered dental hygiene an important part of life. It always fascinates me how ancient civilizations came up with ways in which to do the little things in life that I can so easily take for granted. I'm not sure which is more creative: Combining natural substances and things around you to make them work for a task like brushing your teeth. Or just going forth and inventing a product that can be mass produced so no one has to use elements found in nature anymore.

Either way, the need is met; but I'm definitely happy with my Crest toothpaste and my Oral-B brush instead of needing to use the following clever but entirely disgusting techniques.

The very first tooth brushes that we know of date back to the ancient Babylonian and Egyptian empires around 3500-3000 B.C. These "tooth sticks" were basically twigs that people would chew on until they became soft enough for them to brush away unwanted build up on the teeth. Not a bad first try in history, I'd say, except it's a tree twig! The soggy bark soaking up spit and bacteria from the human mouth is just a playground asking for germs to multiply. I seriously hope they used a new stick each time, but I have my doubts.

However, versions of this tooth stick called chewing sticks still exist today. They have been used for centuries by many different cultures in Africa, the Middle East, and Asia. Sticks from varying different trees, most commonly the Miswak, are still manufactured and can be bought online. Research suggests that they actually work just as well as modern tooth brushes. Who knew?

It is believed that the Chinese were the first to invent what would look like a more modern day toothbrush in the 15th century using bristles from pigs' necks and a handle made out of bone or bamboo. This design was taken to Europe, where Europeans favored the softer horse hair or even feathers for bristles. The thought of bristles on a toothbrush from pigs, horses, and birds — pigs and birds being some of the dirtiest animals on the planet, when you think about it — actually makes my stomach turn. The stick I can almost get behind, but this toothbrush technique is a no-go for me.

It wasn't until 1938 when the use of nylon went mainstream that a synthetic bristle was first made. That's a long history of using some pretty awful materials.

For one group of ancient people who lived over 2000 years ago in Sudan, the purple nutsedge weed served as a tooth cleaner. Analysis of their skeletons reveal that they had remarkably sound teeth for a group of farming people, which often results in more cavities. They might have used the plant as a food or as a medicine, and even though it has a nasty bitter taste, these people used it for the natural benefits it offered, like impeding the growth of bacteria in the mouth.

More power to them for doing whatever it took to keep their mouths healthy. I'm over here like thank goodness for my toothbrush, though.

Even though the purpose of using a toothpaste was the same back then as it is now — hygiene, whitening, and freshening breath — the ingredients used in ancient toothpastes are entirely different. One concoction includes the powder of ox hooves', ashes, and burnt eggshells combined with pumice. Super yummy sounding, right?

Crushed bones and oyster shells were included in the ancient Roman and Greek recipe. Romans also liked to add some charcoal and bark, apparently for bad breath. Tasty. The Chinese are more my style, as they used ginseng, herbal mints, and salt in their pastes.

Though I'm sure there are ingredients used in modern day toothpaste that I wouldn't necessarily enjoy the sound of, I'm so thankful egg and oyster shells aren't factoring in my paste anymore.