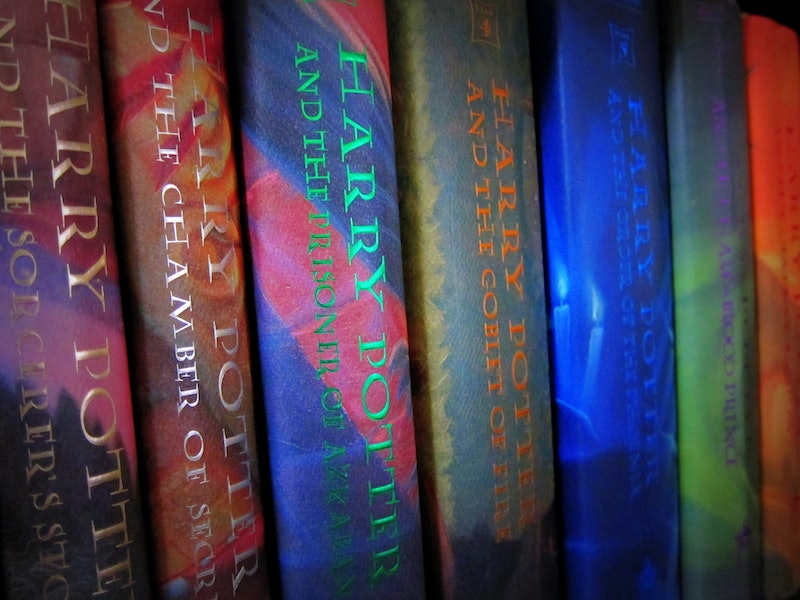 Who can forget reading the last three words in Harry Potter and the Deathly Hallows ? I felt as if I were actually standing next to Harry on the train platform, watching his kids go off to Hogwarts with tears in my eyes, and feeling that the ending was ALMOST perfect (cough FRED WEASLEY cough).

However, the epilogue did leave a lot to the imagination. What were Harry, Ron, and Hermione's jobs? Did they return to school? What was Ginny up to? At first, J.K. Rowling hinted that she might write a Harry Potter encyclopedia addressing all these questions. But eventually, she launched Pottermore, and began posting snippets of writing sharing all the info that didn't make the epilogue. The main trio worked for the ministry! Hermione went back and finished her seventh year! Ginny played pro Quidditch!

But though Rowling often shares where all the characters ended up, she sometimes reveals where they COULD have ended up, too, if she had gone a different way at some point in the Harry Potter journey. And no, none of them involve a female Harry Potter... though that would have been awesome. The quotable author has mentioned seven big alternate endings... so basically, the HP universe timeline is split seven ways. Cue sinister music.

Rowling claimed in an interview with USA Today that "in the early days, everything was up for grabs." Including, apparently, Harry's survival! She stated that "early on I knew I wanted Harry to believe he was walking toward his death..." Personally I'm glad that the Boy Who Lived did just that.

Arthur Weasley Was Scheduled To Be Killed Off, Too

Though Rowling scheduled Arthur Weasley to die in Harry Potter and the Order of the Phoenix , she had a change of heart and couldn't do it.

On the other hand, though Rowling "intended to keep them alive," she ended up killing off both Lupin and Tonks. She stated that their deaths caused her "a lot of pain." Same, JKR. Same.

Neville and Luna Could Have Ended Up Together

Rowling stated in a CBBC interview that "while writing Seven, I started to feel a bit of a pull between Luna and Neville in a way. I started to see how that could work..." Ultimately, however, she decided against the pairing because it "felt too neat."

Midway through the series, Rowling considered killing off Ron, "out of sheer spite." She ended up keeping him around, however, despite Daniel Radcliffe's prediction that either Harry, Ron, or Hermione were going to get the axe.

Harry and Hermione Could Have Fallen In Love

Much to the distress of Hermione/Ron shippers, Rowling admitted that Harry and Hermione could have been a better pairing. She calls Hermione and Ron's relationship "wish fulfillment," and even Emma Watson chimed in to wonder "whether Ron would have really been able to make her [Hermione] happy."

The Original Epilogue Was A Lot More Detailed

Originally, Rowling wrote a much more extensive epilogue, with waaay more information...such as "the name of every child born to the Weasley clan in the past 19 years." Instead of using this ending, she rewrote the epilogue to be "nebulous" and "poetic." For superfans that WANT to read all that info (I would read a complete history of all Weasleys ever, if JKR wrote it), Rowling now posts extra Harry Potter writing on the interactive website Pottermore.

And, if you want to read a REALLY different alternate ending to Harry Potter, you can check out this post from reporter Greg Palast. He claims that Rowling told him about about her rejected ideas from Deathly Hallows, some of which include: Harry becoming headmaster of Hogwarts, Ginny turning into a bird, and Harry's great-great-grandson (who is for some reason named after Voldemort) exhibiting violence that foreshadows him becoming the next Dark Lord.

Is "Tom" a better name than "Albus Severus" ? Should Harry and Hermione have gotten married? Should wayyy more characters have survived?? All I know for sure is, JKR should write a million more Harry Potter books to address all of these questions.