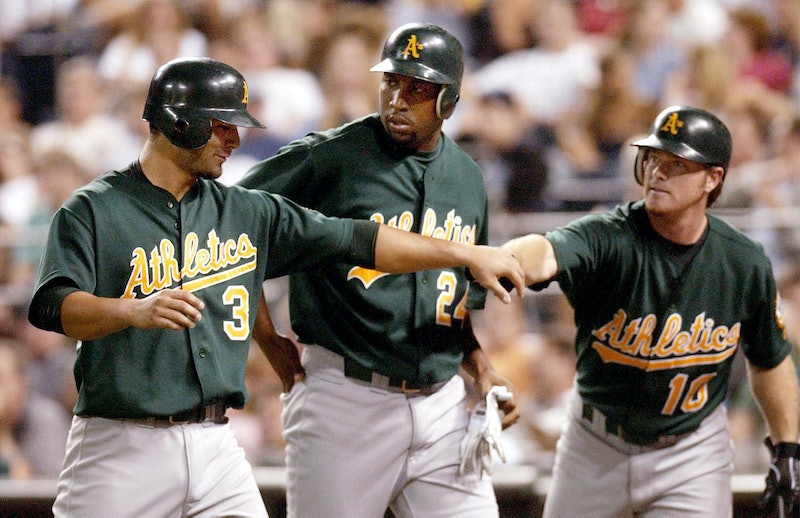 A French teenager made baseball history Sunday by becoming the first woman to be named to Major League Baseball’s international registration list, meaning that a professional club could draft her this summer. There is no guarantee that Melissa Mayeux, who plays shortstop for the French junior national U-18 team, will score a contract with an MLB team. But just making the list is a significant achievement, given that her addition signals that she is a capable enough player to warrant a team's interest. After a couple more years of development though, the French shortstop might make inroads for women’s participation in an exclusively male sport, either through playing college ball at an American university or at the 2017 World Baseball Classic as one of the top 25 French players. But Mayeux's successes on the diamond underline just how many obstacles — both cultural and physical — that women must face to break into baseball at the top levels.

Mayeux is quite an athlete. Along with her role on the junior national U-18 team, she also plays for the French senior national softball team. She was one of only four players selected from France for the MLB’s European Elite Camp this August, where she will work with storied coaches and could potentially attract the attention of scouts.

The French shortstop caught the eye of the MLB’s director of international game development, Mike McClellan, a couple of years ago.

“She's a legitimate shortstop who makes all the plays and is very smooth and fluid in the field,” McClellan told MLB.com. “She swings the bat really well and is fearless.”

He recalls watching Mayeux at one tournament in Barcelona in April. She hit a single off of a pitcher throwing as hard as 91 mph across the plate.

"She ripped a base hit off of him, just to the right of second base," McClellan said. "She just went with the pitch, and she looked good doing it."

Sports journalists agree that the French player's development is worth watching over the next couple of years. But many caution that the 16-year-old's chances for making it onto a club team this year are slim, particularly given her age. For starters, European players are much more likely to wait to sign when they are 18 years old.

Mayeux, in turn, has told MLB.com that she wants to keep playing in France for another couple of years.

"I would like very much to continue playing baseball in France until I'm 18-years-old, and then have the ability to leave for university or another opportunity abroad," she said. “I’d like to stay in baseball as long as possible.”

Even when she comes of age, baseball writers stress that Mayeux will have to convince teams that she is worth taking a chance on. Signing a woman could be a good PR move for a club. But as female SB Nation baseball writers Minda Haas and Stacey Folkemer note, that media attention could make it hard for coaches and players alike to treat her like everyone else. For instance, a coach would risk a firestorm of backlash if he made the decision to bench Mayeux, even if it might be objectively the best thing for the team.

Not to mention that pinning all the hopes of women on one player is a tremendous amount of pressure for a young woman to bear. After all, not many prospects, regardless of gender, make it to the majors.

Even assuming that Mayeux or another female all-star makes it to the MLB, she will then have to deal with a clubhouse culture that is often hostile to female visitors and perform before audiences steeped in decades of thinking that baseball is a sport that women just can’t play.

“I would feel the need to go straight into ‘don't read the comments’ mode,” Haas said of the abuse that Mayeux is likely to face from fans and perhaps even her teammates.

Fortunately, Mayeux doesn’t have problems with her male peers at home.

"I grew up with the same boys, so we've known each other since I was very little," she said. "I've never had a problem with integration or respect. We're very well connected, and that makes a good team."

But the American professional league is a whole new ballgame. For decades, women have been institutionally and culturally kept off the baseball diamond. The MLB only repealed its ban on women in the league in 1992, but since then, no woman player has graced a professional team’s roster. (Nor are there any female umpires that have broken into major league play; many of those women who are trying to call games are finding it hard to even get jobs in the minors.)

Much of the thinking behind baseball's all-male sanctity through the years has turned on the trope that women just don’t have the physical capabilities required to make it in professional ball.

“It’s a really old argument. I’m surprised it’s still around,” Julie Croteau, the first woman to play men's NCAA baseball, told the New York Post in 2014. “It seems like a really weak argument, too, with all the things women have accomplished in sports.”

Granted, throwing a 90-mph fastball takes quite a bit of arm. But while men, on average, are taller, faster and stronger than women, on average, that statistical argument doesn’t rule out that some women certainly do possess the athleticism to compete at the highest levels. Physicality is not the barrier we need to worry about, says Jennifer Ring, the author of Stolen Bases: Why American Girls Don’t Play Baseball.

“Baseball is not the sort of sport where size is definitive,” Ring told the New York Post. “It’s not like football. I think it’s not out of the question that women can play with men, and that athletic women, if you let them be athletes, could actually hold their own with men in high school, college and professional baseball. But nobody wants to believe that.”

The story of Mo'ne Davis, the African American teen who threw a history-making no-hitter during the 2014 Little League World Series, shows that girls can’t be categorically ruled out from keeping up with boys. There are always outliers.

And the number of women who could develop into major- and minor-league ball players might surprise us if we spent resources and time developing young girls to play baseball. Today, women who want to stick with the sport past Little League are often shunted too easily into softball, where different styles of pitching and hitting mean that they can’t slip back into baseball at a later stage. This is certainly not to rap softball, but for girls who don’t want to trade in the overhand pitches, the examples of women baseball players are few and far between.

Women will get to major league baseball eventually, speculates Folkemer, but the key question is going to involve developing a critical mass of talented, hard-hitting and fearless female players. After all, turning out a top professional athlete out of the millions of young kids who first sign up for tee ball is a numbers game, SB Nation writer David Coleman reminds us.

“To produce 500 major league baseball players, it takes a million or more Little Leaguers playing,” Coleman wrote in response to questions about whether there would ever be a female player in MLB. “Only the strongest players survive. Girls, though, often stop playing baseball at the Little League level … Rarely do you see a girl playing high school baseball, much less college. Without more bodies in the system, the odds drop precipitously.”

And with all of the cultural and institutional barriers that women face in making a career out of baseball, it will be important that players like Mayeux set examples for younger girls to show them that they can make a career by pursuing the sport they love. She might not be the one to make it to the major leagues, but we should definitely keep an eye on her as she moves onto a larger national or international stage.

As Haas put it, "Melissa Mayeux matters as a breaker of one barrier, who may open the door for breakers of bigger ones."