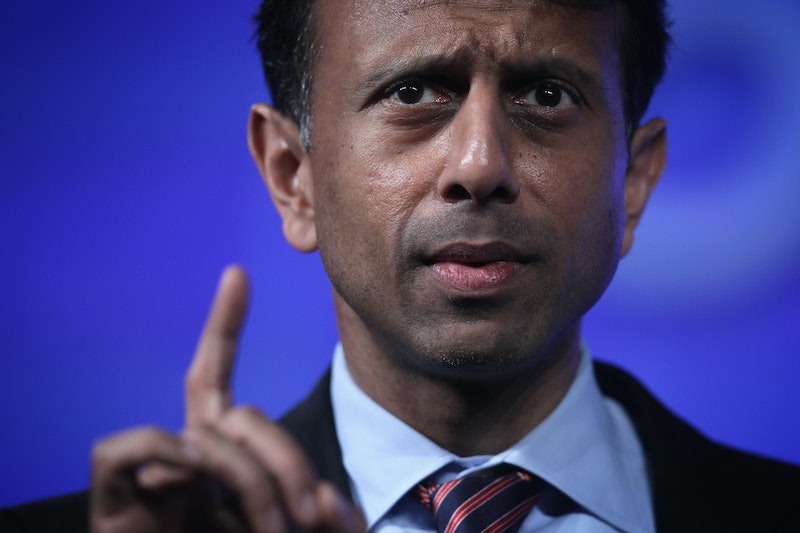 On Wednesday, the first Indian-American governor of the United States entered the race to become the first Indian-American president of the United States. And he did so... well, kind of awkwardly. Louisiana Governor Bobby Jindal announced his presidential campaign with a candid-camera-style family home video, which on its own is pretty reflective of the governor's unorthodox style. But hey, maybe he figures he's got nothing to lose. Joining an already crowded political field, most consider Jindal to be a long-shot in securing the Republican nomination, and national polls even show that he is indeed at the bottom of the list of 16 candidates. How come? Perhaps it's because Jindal, whose popularity has also taken a serious nose dive in his home state lately, has sounded like a complete and utter insane person on multiple occasions.

And I'm not the only one who thinks so. According to the latest Wall Street Journal/NBC News poll, only one person out of 236 surveyed said Jindal would be their top pick for president — that's less than one percent. And he's not exactly a popular guy in Louisiana either. After winning reelection in a 2011 landslide, Jindal's approval ratings plummeted when his fiscal policies forced public universities and colleges to downsize and lay employees off. This ultimately led to a $1.6 billion shortfall for the state.

But despite what most people would consider pretty slim chances, Jindal has shown a steely confidence in his own prospects. Last week, in an interview in Washington, Jindal said:

When the front-runners are still clumped together around 10 percent, what that tells me there is a path wide open for folks. I get the sense that voters are saying this isn’t about just one good impression.

Mmmkay.Believe it or not, that's not the craziest thing Jindal has ever said. Though he has the potential to galvanize Iowa's evangelical Christians and right-wingers with his socially conservative platform (he's pro-life, anti-stem cell research, anti-gay marriage, and pro-gun), his past statements might turn off the general population. Take a look at six of the most bizarre Bobby Jindal quotes we've heard yet.

He Urged Republicans To Stop Being "The Stupid Party"

In an effort to set himself apart from the rest of his party as an intellectual, Jindal essentially called Republicans stupid in a phone interview with Politico in 2012:

It is no secret we had a number of Republicans damage our brand this year with offensive, bizarre comments — enough of that. It's not going to be the last time anyone says something stupid within our party, but it can’t be tolerated within our party. We’ve also had enough of this dumbed-down conservatism. We need to stop being simplistic, we need to trust the intelligence of the American people and we need to stop insulting the intelligence of the voters.

He Tried To Pretend That Evolution Is Not Part Of Biology

At a September 2014 event organized by The Christian Science Monitor, one journalist tried to ask Jindal, who graduated from Brown with a Biology degree, about his stance on evolution. Jindal's response:

The reality is I'm not an evolutionary biologist.

Right, because evolution is not a central theory upon which all of biology is based...

He Tried To Plead Ignorance About Climate Change

At the same Christian Science Monitor event, Jindal was also asked for his insight on how much human activity contributes to climate change. To that, he responded:

Yeah, except that the scientists have figured it out, and they've made it pretty clear that human activity has been the predominant contribution to global warming. But nice try, Bobby.

He Then Calls Obama A "Science Denier"

Perhaps the craziest thing Jindal said at the September 2014 event was that it was actually the Obama administration that was denying science, not him.

Talk about the pot calling the kettle black.

He Talked Smack About Obama At A Friendly Meeting

In February 2014, Jindal and every other governor had the opportunity to meet with President Obama at the National Governors Association Meeting at the White House. After what was supposed to be a productive meeting with Obama in order to enact change locally, Jindal used the media coverage to criticize the president instead, saying:

I think there are things we can do instead of waving the white flag of surrender, instead of declaring this economy to be a minimum wage economy. I think our economy, I think America, can do better.

His comment was in response to Obama signing an executive order to raise the minimum wage for federal contract workers to $10.10 an hour, a move that Jindal apparently opposed. Democratic Connecticut Governor Dan Malloy responded to Jindal's statement by saying:

I don’t know what the heck was a reference to white flag when it comes to people making $404 a week. I mean that is the most insane statement I ever heard quite frankly.

His Epic Psychobabble-Like Rant In Politico

In June 2013, Politico published an op-ed penned by Jindal, who sounds legitimately unstable in the piece. It's the kind of rant you'd expect some super stoned 21-year-old to scribble in a spiral notebook in his parents' basement at 3 a.m. and title it "Bobby's Manifesto." Here's an excerpt:

Because the left wants: The government to explode; to pay everyone; to hire everyone; they believe that money grows on trees; the earth is flat; the industrial age, factory-style government is a cool new thing; debts don’t have to be repaid; people of faith are ignorant and uneducated; unborn babies don’t matter; pornography is fine; traditional marriage is discriminatory; 32 oz. sodas are evil; red meat should be rationed; rich people are evil unless they are from Hollywood or are liberal Democrats; the Israelis are unreasonable; trans-fat must be stopped; kids trapped in failing schools should be patient; wild weather is a new thing; moral standards are passé; government run health care is high quality; the IRS should violate our constitutional rights; reporters should be spied on; Benghazi was handled well; the Second Amendment is outdated; and the First one has some problems too.