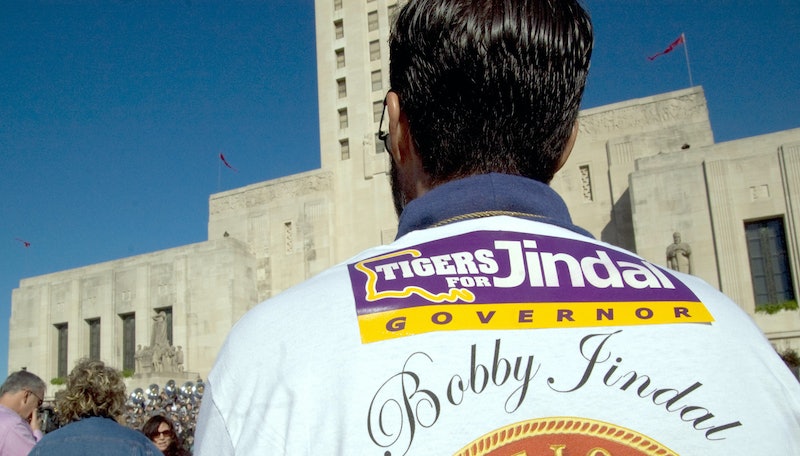 On Wednesday afternoon, Louisiana Gov. Bobby Jindal announced he will be seeking the Republican presidential nomination for 2016. A presidential campaign exposes a politician to all sorts of scrutiny, and for this election cycle, the public is having a ton of fun picking apart candidate campaign logos. Jindal is no exception. Twitter already started critiquing Jindal's campaign logo in hilarious fashion. Honestly, how did we entertain ourselves during election seasons before the rise of Twitter?

Jindal's logo is pretty straightforward: It's his last initial adorned with red, white, and blue images. But nothing is ever simple when it comes to politics, and campaigns are always very carefully crafted affairs. Everything about a campaign logo is intentional and attempts to convey a very specific message, but that doesn't mean the message always comes across exactly as the candidate wants it to. And dammit, it is our right as Americans to mercilessly pick on politicians that we don't like, so I turn to Twitter users to for their ingenious hilarity regarding Jindal's logo.

My own opinion was that the logo looks a little reminiscent of the Confederate flag (I'm thinking mostly of the three stars), but that might just be me. Here's what the Twitterverse has to say about Jindal's logo.

First, let's take a look at the logo itself. Like I said, pretty simple. But apparently, the simpler a logo is, the more room there is to have fun with it.

Apparently this user thinks a bolder statement could be made...

Others feel that perhaps Jindal's logo is a bit of a rip-off of a previous campaign.

Plenty of folks are comparing the logo to things other than President Obama's previous logo.

And still others had pro-bono design suggestions for the new candidate.

This person just wants an answer to an honest question.

Everyone's a critic! Well, except for this guy.

So, there we have it. Less than 12 hours into his official campaign, and Jindal is already beginning to get a taste for what's in store from his opponents over the next few months.