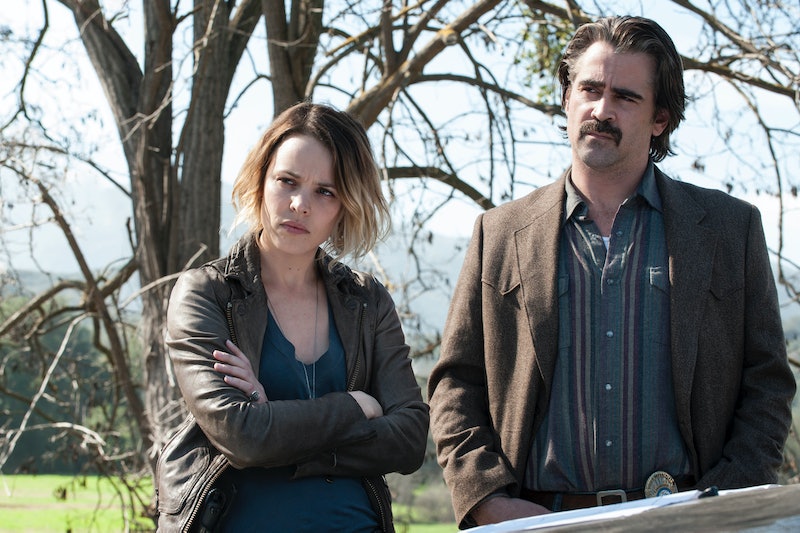 True Detective is back with a new cast, a new setting, and all the makings of another groundbreaking season of crime drama: corruption, scandal, disillusioned detectives, and a brand new but equally gruesome murder case. In place of the southern Gothic setting of Season 1, True Detective Season 2 has Vinci, California, located in Los Angeles County. If you haven't heard of Vinci, it's because it doesn't really exist (under that name), but Ventura County detectives on the show don't know the name either. When they inquire, Colin Farrell's Detective Ray Velcoro answers "[it's] a city... supposedly." And a corrupt one — that's established early on, between Vince Vaughn's role as a mobster-turned-businessman and a newspaper headline indicating the city's corruption is common knowledge.

After the body of corrupt city manager Ben Caspere is discovered, Vinci meets Ventura County, as Velcoro will be working with Ventura County detective Ani Bezzerides and California Highway Patrol cop Paul Woodrugh to solve the brutal murder. This collaboration between three separate law enforcement groups who likely have conflicting interests is a departure from the formula of Season 1, and one that is sure to come with a huge dose of tension.

Although Vinci itself is a creation of showrunner Nic Pizzolatto, its inspiration is the very real Vernon, California, described by Vanity Fair as:

[A] tiny industrial city a few miles south of downtown Los Angeles. Vernon, which, as of 2013, had just 114 inhabitants, is home to factories of the polluting variety, slaughter houses, and chemical plants. Used as a dodge and a tax haven, it’s been controlled by just two families for most of the last century and recently came under intense scrutiny, with press and prosecutorial interest in public officials who seemed never to stand for election.

In 2011, The New York Times described Vernon in a similar way.

[A] bleak, 5.2-square-mile sprawl of warehouses, factories, toxic chemical plants and meat processors that looks like the backdrop for “Eraserhead,” the David Lynch movie set in an industrial wasteland.

However just recently, Vernon spokesman Frederic MacFarlane told the Los Angeles Times that, "'True Detective' will have some settings that look like the city, sound like the city and feel like the city. But it's not going to be the city of Vernon." He also said that Vernon "operates like any other city, and, in the past, it didn't operate like that," explaining that its scandals are over.

Here's everything you need to know about Vernon's past, which seems to have inspired Vinci more than its present state:

Its History Of Accusations Dates Back To The 1940s

The City of Vernon was founded by John Baptiste Leonis in 1905. He was investigated for corruption in the 1940s according to Business Insider, but the charges were eventually dropped. After his death in 1953, power went to his grandson, Leonis Malburg, who would reign as mayor for over 50 years (contested elections were allegedly extremely rare — as Business Insider reports that there wasn't a single one between 1980 and 2006). The website also reports that Los Angeles County convicted Malburg of voter fraud in 2009, and part of the complaint said that he resided in the wealthy Hancock Park neighborhood, not Vernon. This is echoed in True Detective, as the mayor lives in Bel Air rather than Vinci.

Amid a 2012 state audit of Vernon, former city administrator Eric Fresch was found dead in a Bay Area park, according to the Los Angeles Times. His death occurred the same day a report was released that raised questions about his annual salary, which exceeded $1 million. He was subpoenaed by the state, but died before he could respond. Could Fresch's death be the inspiration for this True Detective Season 2's central mystery — the death of city manager Ben Caspere right as federal scrutiny is being placed on Vinci? Fresch's death was later ruled an accident, but locals remain skeptical, according to Southern California radio station KPCC. However, True Detective's various police forces are treating their city official's death as a homicide.

In 2011, the LA Times reported that the state legislature moved to disincorporate Vernon from Los Angeles County, but it was unsuccessful. Instead, a deal was made with state senator Kevin De Leon, who said he would rally against the legislation as long as Vernon put $60 million towards community projects in its hard-scrabbled neighboring cities. De Leon told the newspaper, "It's no secret that for decades the city of Vernon has run roughshod over its neighbors ... This is an opportunity for them to step up and do the right thing." Will Vinci face a similar threat of disincorporation as details of corruption — and far worse crimes — come to light? This seems like a likely plot device, and it's equally likely that Vinci city officials will do anything to prevent disincorporation from happening.

Some Scenes Were Shot In Vernon

Spokesman MacFarlane told the LA Times that Vernon City Hall granted HBO's crew a permit to film in the city, so the locations we see on our screens this season will be the real deal. Though Vernon has gone through a lot of change and overcome its past scandals, I think Vinci still has a long future of corruption ahead.