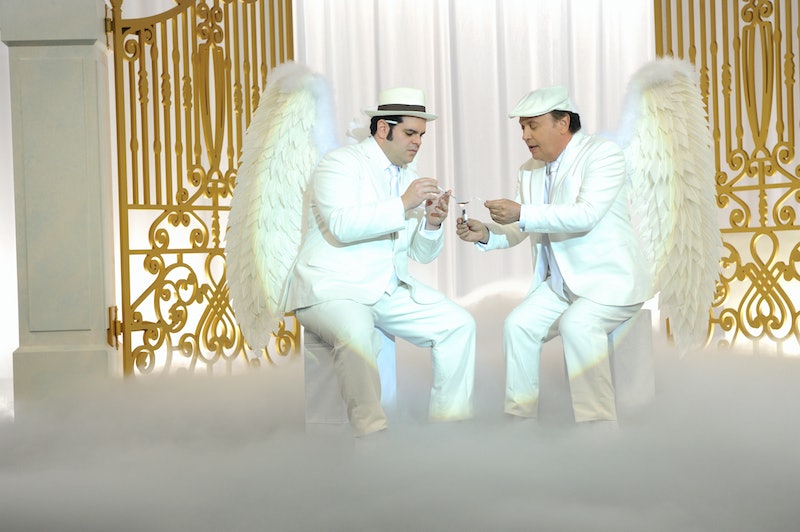 The Comedians has what seems like a slam-dunk of a premise: Get a veteran comedian like Billy Crystal, team him up with an up-and-comer like Josh Gad, shake, mix, and see what happens. As the series wraps up on FX on June 25, do you think the actual show lived up to its premise? Keep in mind that FX is the network of Louie, so it had a high bar to clear. So, will FX renew The Comedians for Season 2?

This one is tough to call. FX hasn't made an official announcement about whether or not The Comedians will return. Usually, you can get a hint by looking a the show's ratings, but ratings for The Comedians have had huge, wild swings. It premiered soft, with just 843,000 total viewers, and didn't really surge from there. That might be OK — Married received a second season based on similar-ish numbers — but The Comedians didn't really shore up a week-to-week fanbase. According to TVSeriesFinale.com, the total viewership sometimes changed by 50 or 60 percent in a week. Networks don't really love that kind of variation, so The Comedians could be doomed.

But, if you're a fan of Josh Gad and Billy Crystal, we can get through this. Here's why:

Almost too much Josh Gad? Not only is he in the Adam-Sandler-fights-'80s-arcade-games movie Pixels this summer, he's also slated for some big-ticket projects, like being a voice in the Angry Birds movie and Gaston's sidekick Le Fou in Emma Watson's Beauty and the Beast.

Crystal doesn't seem to have as many projects lined up as Gad does, but that's OK. We can get through this. Just think of the last time he hosted the Oscars, and you'll realize that sometimes memories of Crystal are better than the real thing. When Harry Met Sally 4 Lyfe, y'all.

3. It Frees Them Up For Better Projects

Even if you want to see as much of the two of them as possible, are Crystal and Gad really the best together? I'm not so sure. Not that they're terrible together, but their comedy is similar, and they both seem to annoy each other more than they play off each other. (I'll grant that some people find that kind of bickering funny.) If The Comedians didn't come back for a second season, the'd be free to find comedic partners that are better suited for each other. Or, they could both head back to Broadway!

4. It Frees Up A Slot For Other Comedians

The Comedians, Louie, Denis Leary's Sex&Drugs&Rock&Roll — getting kind of a mostly-older white dude vibe from FX's comedy lineup? Only Married and You're the Worst give hefty time to the (also white) ladies. If The Comedians wasn't a going concern, maybe FX would be freed up to find its own Amy Schumer or Jessica Williams.

If you're feeling down about the lack of The Comedians, just think about the joy a ball of frozen water can feel on a hot, summer day. You'll feel like... a happy snowman.