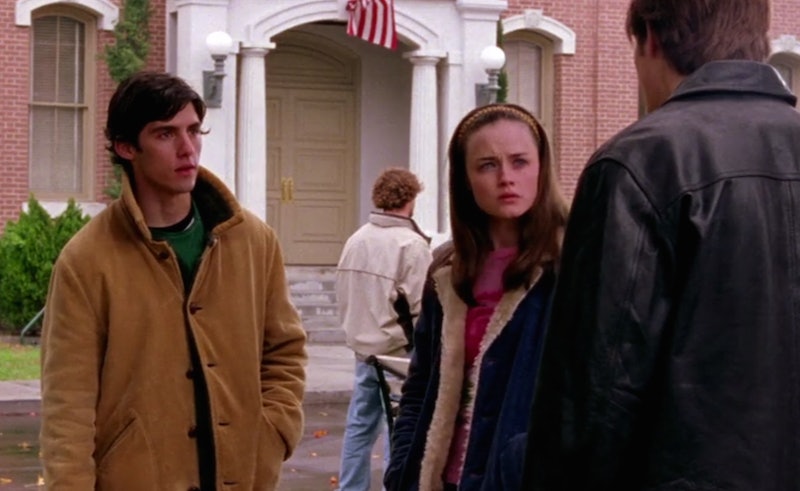 This debate will rage on for centuries, but I know my choice: Jess will always be better than Dean on Gilmore Girls in my heart. Sure, he hurt Rory by bailing on her and running off to California when he knew he wouldn't graduate high school. And sure Lorelai wasn't a huge fan of him either. But from the snippets of Jess we saw later in life (and in later seasons) he got his life together and could have finally become the kind of man who deserved Rory. For me, the scenes that sealed the deal that Jess was the best were all the times he was able to come up with hilarious quips about everyone in Stars Hollow. Most of them were directed at Luke, but every once in a while we'd get a really good one about Dean either to his face or to Rory.

The thing that made these quips all the more entertaining is the fact that Dean would get so angry about them (and so easily too), which made Jess all the more adamant about continuing the one-liners, despite Rory's protests. I just can't help it, guys: Jess is always number one in my book. These are just some of the many great jabs Jess took at Dean over their short but tense time together, but man, are they some good ones:

"Well, you’re having your vertical From Here to Eternity moment right in front of the super glue."

When Dean and Rory show some PDA in the middle of Doose's Market, they should have known they'd get some commentary.

You would think Dean could understand the simple logic of a simple town tradition. Too much anger makes Dean a dull boy.

"Excuse me Edgar Bergen, I think I’d like Charlie McCarthy to answer now."

For those who may not understand the many classic references from Gilmore Girls (and man, are there quite a few), Edgar Bergen was a famous ventriloquist who had characters like Charlie McCarthy. Basically, Jess is saying Dean treats Rory like his puppet when he does the talking for her. Is that an early form of feminism? Ooh, I do hope Jess is a feminist.

4. Jess On Why Making Fun Of Dean Is So Funny

"And he is so tall, and I just was looking at him and he’s standing there all tall and mad and I just… I don’t know. It was… it was really funny."

"You're doing that towering over me thing, huh, I tell ya, you've really got that down. it helps that you're 12 feet tall but this Frankenstein scowl really adds to the whole...(waving hand gesture)"

Do you think Jess hopes that if he just talks enough Dean will get tired and go away?

6. Jess On Dean's Bracelet To Rory

"I mean, I know it’s got an ‘I’ve been pinned’ Bye, Bye, Birdie kind of implication to it, but it was just a bracelet."

Jess speaks the truth, especially since Dean hardcore freaks out about the bracelet.

"Plus, the two of you walking around the other day like some damn Andy Hardy movie. Seemed to me like you’re still pretty together. I half expected you to break into a barn and put on a show."

Andy Hardy movies are a series of corny, overly sweet films in which Mickey Rooney played Andy Hardy. This is a perfect description of the First Annual Stars Hollow End of Summer Madness Festival, or as Jess calls it: The Summer Insanity Plea. Clearly he was just jealous of Rory and Dean still being together.

Dean demanded Rory do things one too many times, and I was glad Jess picked up on that. From the Donna Reed episode and on, I knew that Dean couldn't handle the type of women Lorelai and Rory are and Jess could tell too at the 24-Hour Dance Marathon, aka the night Dean finally broke up with Rory.

"It's getting a little West Side Story here, Dean, and I gotta warn you, my dancing skills are not up to snuff."

Dean had just tried to instigate a fight out of Jess and thankfully he knew that he didn't have to fight now that he was with Rory.

More like this
“The Door Is Always Open” For Another 'Breaking Bad' Spin-Off, Says AMC Boss
By El Hunt
The 'Hocus Pocus' Sequel Finally Has A Release Date & It Makes Total Sense
By Shannon Barbour and Radhika Menon
Did *That* Character Really Die In The 'Stranger Things' Season 4 Finale?
By Grace Wehniainen
'Stranger Things' Fans Are Begging For Steve To Live For The Funniest Reasons
By Grace Wehniainen
Get Even More From Bustle — Sign Up For The Newsletter