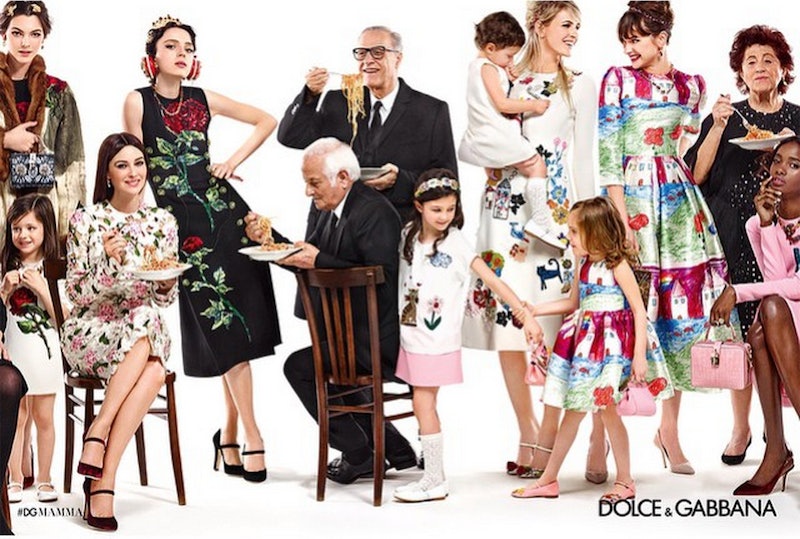 Did you happen to catch Dolce & Gabbana's Fall/Winter 2016 runway show at Milan Fashion Week? The whole collection and presentation was Domenico Dolce and Stefano Gabbana's empowering ode to motherhood: Mothers, daughters, and pregnant women all walked the runway together, and many of the clothes featured childlike art, as well as the phrase, "I love you, Mamma" written in several different languages. The whole thing was a nice feminist twist on your garden variety fashion show, and now the brand has taken things a step farther with their latest ad campaign. Yep, the Dolce and Gabbana Fall/Winter 2016 Campaign features multi-generational fabulousness... and it's kind of the best thing ever.

Basically, it's kind of like they took Lanvin's Spring/Summer 2015 campaign, and bumped it to the next level (Lanvin's campaign featured a few real-lifemother-daughter model pairs, as well as some sibling pairs, and the overall effect was very, very cool — especially as it featured quite a few legends). D&G's new ads feature not one, not two, but several generations of couture-wearing individuals — everyone from Grandpa and Grandma (who happen to be eating spaghetti, because of course) to the newest additions to the family are present for what looks like a collection of surreally well-dressed group portraits. Let's take a look:

Pretty hard to argue with that, right? It's a pretty darn spectacular collection (perhaps most memorably, Diane Kruger wore a well-fitted dress featuring a sequined rose at Cannes, and Emilia Clarke wore a shift emblazoned with childlike drawings out and about in London) — so it's only fitting that they've got an ad campaign to match.

More like this
All Of 2023's Biggest Nail Art Trends, According To Top Manicurists
By Jordan Murray
'Love Island's Will Got A Farm Animal Manicure & It's *Adorable*
By Sam Ramsden
Lauren London’s Best Outfits From Netflix’s You People
By Alyssa Lapid
Everything You Need To Know About Gucci’s Signature Diana Bag
By Alyssa Lapid
Get Even More From Bustle — Sign Up For The Newsletter
From hair trends to relationship advice, our daily newsletter has everything you need to sound like a person who’s on TikTok, even if you aren’t.