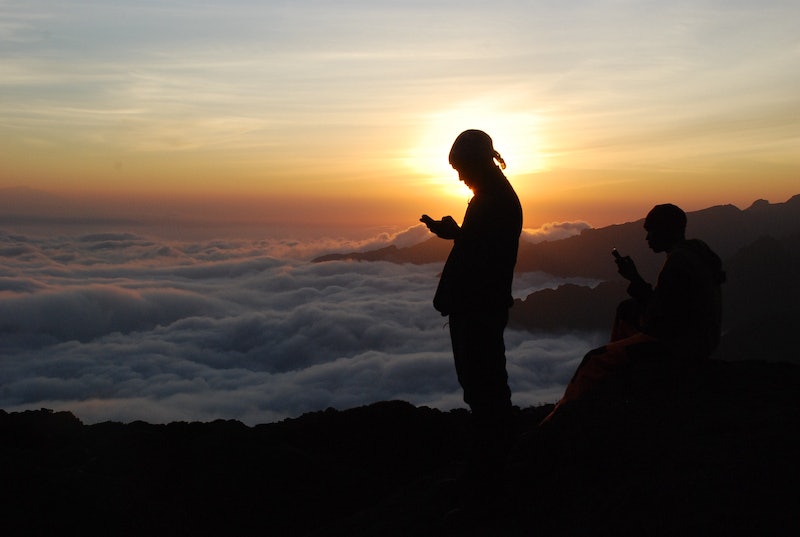 If you're an online dater, you've probably at least tried your hand at using Tinder before; as such, you're probably familiar with the fact that, when you're presented with a user profile, you can either swipe left if you don't like the person or swipe right if you do. If you've ever wondered why you swipe right to "like" someone on Tinder, though, the answer goes back to human psychology. Who know that there were actual reasons behind which swiping directiong indicated likes and dislikes?

Apparently, there is a "natural positive feeling" associated with swiping to the right on Tinder. In fact, did you know that in theatre, motions that travel left are perceived as negative and those that travel right are perceived as positive? Yep — and there's even science to back it up. Jim Davies of the Institute of Cognitive Science in Canada postulates on Nautilus that because the English language is read from left to right, this direction is associated as being natural and good for English speakers, while something moving from right to left gives people a reason for pause. Research has also proven this to be true in the opposite case for languages that are written from right to left such as Hebrew and Arabic, where the association from right to left is considered good and left to right conjures up bad feelings.

This principle applies to more than just language, though; it even holds true in sports. Studies have found that referees call more fouls on players who are to the left of their field of vision than those who are to the right. Shocking how this unconscious process works, right?

Davies also wrote that this internal bias towards the right in our English speaking society isn't documented in those who haven't learned to read or write, so it seems that this is indeed a learned behavior.

So, is Tinder actually designed with this principle in mind? As Nautilus notes, swiping to the right to indicate that you have interest in someone on Tinder was probably a decision made by the app's initial development team. Why would this decision be made? Because the action feels natural, rather than being an overt strategic choice.

But, Tinder keeps to the swipe right phenomenon even in countries where language is read from right to left, such as Israel. Why would this be when this clearly goes against human psychology? "Perhaps the developers thought it best to just stick with the right-is-good tradition of most countries," Davies writes in Nautilus. "The directional preference is a pervasive but mild effect, not so strong that good action in the wrong direction is incomprehensible."

It's also important to note that this rule doesn't apply in all cases; some exceptions are definitely worth noting. For instance, most video games have action that moves from left to right, but the game Jungle Hunt moves from right to left. Like anything, this rule is going to be broken in some ways.

I hope Tinder themselves comments on this matter, since it would be interesting to learn how the swipe right principle came to be. In the meantime, try noting all of the things that move from left to right and become fascinated in how many weird ways our minds work. Or, just keep using Tinder.