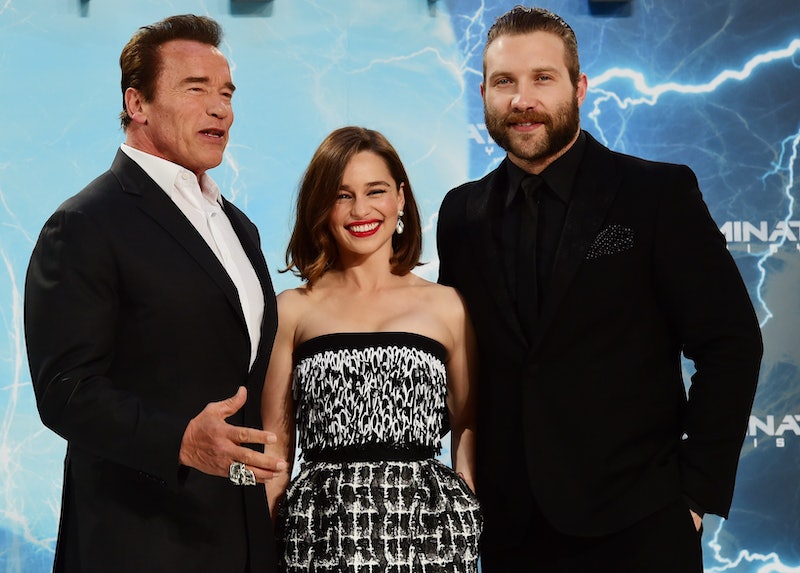 This isn't Laeta Kalogridis' first rodeo. The seasoned Hollywood veteran has written a handful of well-known screenplays, from the mind-boggling Shutter Island starring Leonardo DiCaprio, to collaborating on the upcoming Terminator Genisys , the fifth installment in the beloved Arnold Schwarzenegger series. "I have a deep and abiding love for the franchise, the characters, and the world that James Cameron created," the writer and occasional producer says. "The pressure was immense, to try and be true to the characters but at the same time create a story that felt new for audiences."

Terminator Genisys revisits characters we've grown to know over the years, but this time, we see them through the lense of new actors (Game of Thrones' Emilia Clarke, Divergent's Jai Courtney, Zero Dark Thirty's Jason Clarke). When the leader of the human resistance against the machines, John Connor (Clarke), sends Kyle Reese (Courtney) back to 1984 to protect Sarah Connor (Clarke), he discovers more than a perfectly preserved '80s Arnold Schwarzenegger. An unexpected turn of events creates a fractured timeline, an unfamiliar version of the past he once knew, and must team up with the Guardian (Schwarzenegger) and Sarah Connor in an attempt to reset the future.

"Trying to find a way to revisit characters that are so beloved and so specific, yet at the same time give those characters new challenges, new moral quandaries, and new adventures was a little bit of a head-spinner," Kalogridis says. "If you take the same characters and give them vastly different life experiences than we've seen them have before, what will they do? How much will they change? How much will they remain, at their core, the same? Paradoxes seem to come with the franchise."

But the fact that the film has warranted four sequels is a testament to it's popularity and timeliness, even today. "The idea of sending out an unstoppable, unemotional, ruthless and inescapable killing machine that has no qualms about the loss of life, and no questions about who it targets or concerns about collateral damage? That's not an inaccurate description of military drones," Kalogridis says. "The human struggle with how much technology is too much, the question of when we will reach a tipping point where we ourselves are potentially destroyed by that which we have rushed headlong to create... is as relevant today as it was in 1984 — possibly more so."

Technology vs. humanity is a concept that, if our innovation and resources continue to present themselves in spades, will only become more relevant with time. "Our reliance on technology in every aspect of our lives is a double-edged sword, at best," the writer says. "We live so much of our lives in and around technology, we rely on it more and more. We should be more thoughtful about that than we are, in my opinion. Also, the pursuit of A.I. is ongoing today, and we are closer than we've ever been. But I am not at all sure that having the ability to create something — especially something as complex and essentially alien as machine intelligence — is the same as having the wisdom to know what to do with it, once you've brought it into the world."

While the Terminator films boast one of the most innately masculine figures of all of cinema — The Governator himself — the franchise, at its core, is about one badass woman. "Tough, capable, emotionally complex women are a hallmark of this franchise," Kalogridis says. "Sarah is an almost mythological figure. She's a warrior woman who will do anything to save her son and to save the future... Sarah plays against type in terms of being 'the girl' in Terminator films is, to me, one of the greatest strengths of the franchise."

See Sarah, John, and of course — a handful of futuristic and retro terminators — in Terminator Genisys in theaters Wednesday, July 1.