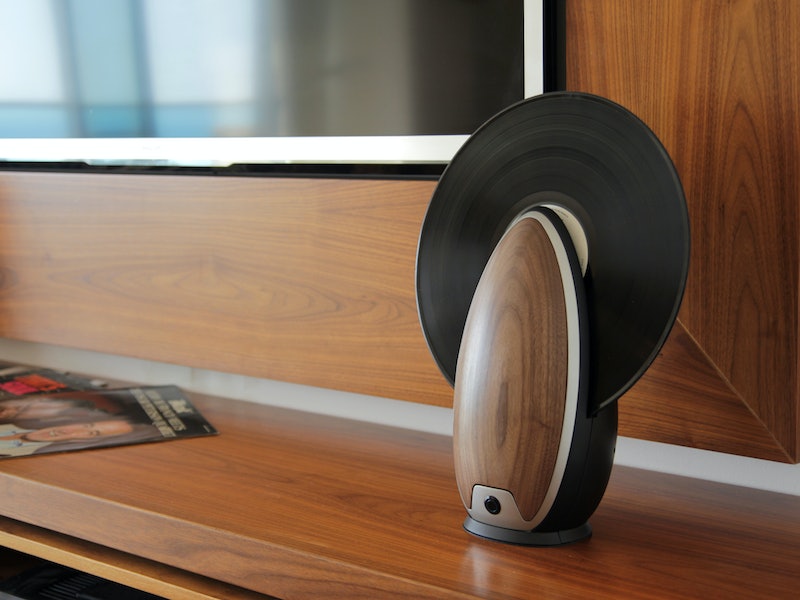 Here’s something new and fancy for all of you vinyl lovers out there: “TOC,” a vertical record player that invests an old-school device with modern aesthetics. Created by Roy Harpaz, an industrial designer in Israel, TOC plays records via a linear tracking system (so it delivers the analog sound that distinguishes vinyl from digital recordings), but it also gives users some contemporary functionality by allowing them to skip tracks and control the player via either remote or LED touch buttons on the front panel. The player is awfully pretty, too, with a sleek egg shape and walnut front.

Although the aesthetics of TOC appear to be ultra-modern, according to Harpaz, their inspiration was actually ­very old. He writes on his website,

The inspiration for the design of 'TOC' was drawn from the dinosaurs who roamed the Earth in the Mesozoic era. This era divided for three periods; The Triassic period ("T") and the Cretaceous period ("C") which represents the beginning and the end of the Mesozoic era and the Jurassic period which was the most prolific period for the dinosaurs. This period is represented with the letter "O" and the 'TOC' shape, which is symbolizes the amniotic egg.

You can find out more about the device’s specs on Harpaz’s website. Here's what it looks like:

According to a comment from Harpaz on DesignBoom’s coverage of the device, TOC is currently in the prototype stage and is not yet available for purchase. Fortunately, this player isn’t the only device to creatively fuse retro functionality and modern styling, and vice versa. Scroll through for 9 other devices that will satisfy your itch for some retro/modern fusion:

Finally, for those of you who are *really* committed to this retro thing: