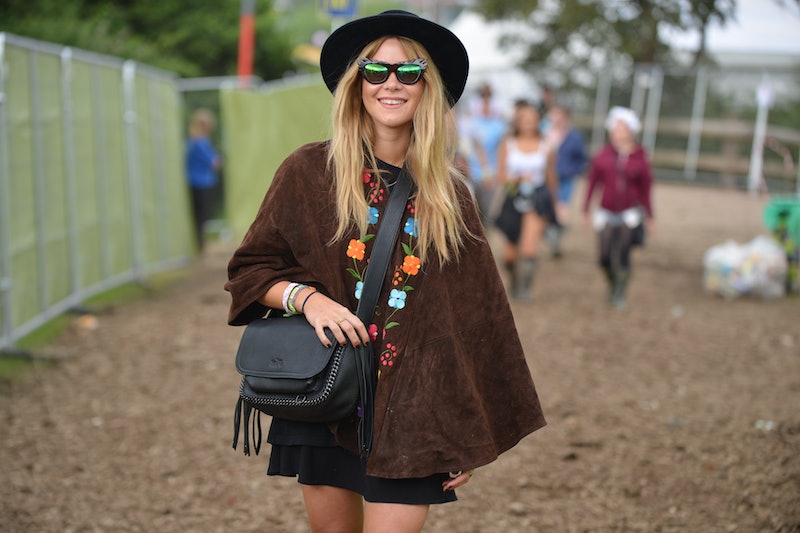 After the fashionable fuss of Coachella has passed and the glowing, floor grazing maxi gowns have vacated Delaware after the Firefly, there is only one music festival to strike up the sartorial spirit again for summer: Glastonbury. Frequented by such edgy British personae as Kate Moss, Lilly Allen, and Cara Delevingne, the Glastonbury Festival is modernized, gritty grunge glamour at its finest. In lieu of saccharine sundresses and cutesy crop tops, Glastonbury offers distressed cutoffs and mud-splattered motorcycle jackets. And where nude ankle booties and wedges reign supreme at other music paloozas, Hunter Boots take precedence over all other footwear at Glastonbury.

Glastonbury is not for the sartorially reticent; simply glance over its rocker-populated guest list and the event's vibe becomes abundantly clear. Unless you understand the meaning of utilitarianism in fashion, Glastonbury is not your sartorial scene, and if you favor neon-brights and dashing, debutante-inspired lace, you may want to purchase a ticket to the Lincoln Center ballet instead. However, if you intend to intrude on Glastonbury's well-outfitted grounds, you may as well understand the festival's fashion rules.

As a member of the Glastonbury Festival's royalty, Kate Moss has dictated exactly what may be worn to the palooza for over a decade. Therefore, when deciding what to wear, ask yourself one fundamental question: What Would Kate Moss Wear?

2. If You Don't Have Hunter Wellies, Don't Even Bother Attending

Hunter Boots are ubiquitous at Glastonbury, and for a good reason. Unless you enjoy marching around with legs encased in a thick coating of mud, throw on a neutral pair before entering the grounds.

3. Suede And Fringe Are Non-Negotiable

As Rita Ora so boldly demonstrates, '70s-inspired sartorial accents such as fringe and suede are an essential facet of the Glastonbury experience.

4. Anyone Who Sports Heels Will Be Openly Shunned

Even if you choose not to sport Hunter Boots on the premises, heels are entirely out of the question for practical reasons. See point two for further elaboration.

5. An Anorak Is Everything

Channel Glastonbury's utilitarian spirit and save yourself from the elements with an anorak, which is part of the festival's unofficial uniform.

Though neon brights and other twee garb is strictly verboten, adding a pop of color to a sweatshirt-and-boyfriend-jean ensemble is well within your rights.

7. Leather And Denim Are Fashion Do's

Emma Watson cleverly demonstrates the usage of one of Glastonbury's key fabrics: denim. The material is an absolute must for the festival, especially when paired with a quilted leather jacket.

8. Grit Is A Completely Acceptable Manner Of Accessorization

If you don't exit the festival strategically splattered with a few tasteful splashes of grit and grime, you cannot call yourself a Glastonbury veteran.