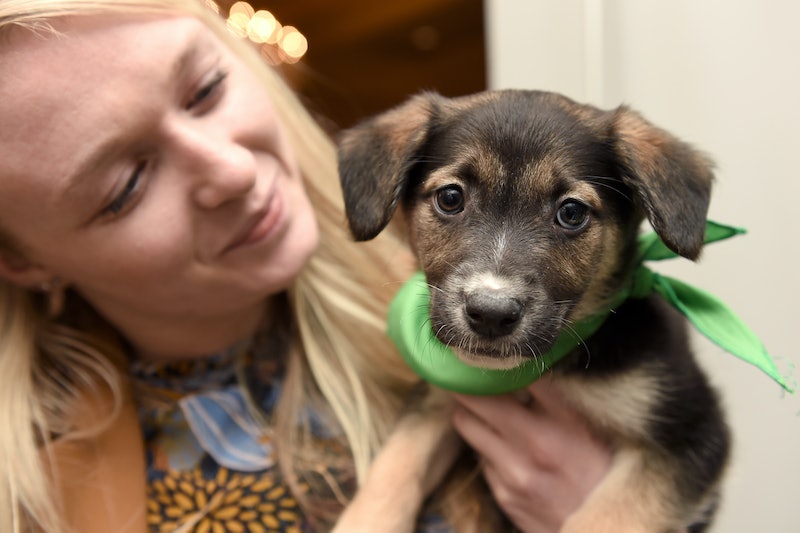 Everybody loves an animal lover. More specifically, everyone should date, if they haven't already, a dog lover. After all, they're known for being fun, social, easy-going, and not afraid of commitment. That's why it's not surprising to see that animal lovers have a lot going for them when it comes to dating. In a recent study of more than 2000 adults across the UK, insurance company, Direct Line, wanted to see what role dogs played in making human connections. It was found that 46 percent of Brits thought being an animal lover makes a potential partner more attractive. About a third of those surveyed even believed that dog owners were more likely to have positive traits like loyalty, compassion, and kindness. The study even found that more women (49 percent) were more likely to be attracted to animal lovers than men (40 percent).

The study also found that dogs not only help with matters of romance, but in friendships, as well. About 46 percent of the people surveyed said that walking a dog is one of the easiest ways to make friends, and 29 percent of dog owners have even admitted to meeting lifelong friends while they were walking their dogs.

This isn’t the first study to show the positive impacts a pet can have on human relations. A 2014 study of 500 18 to 26-year-olds, conducted by the Cummings School of Veterinary Medicine at Tufts University, found that young adults who had strong connections with their pet felt better connected in their relationships. A 2011 study of over 200 people published in the Journal of Personality and Social Psychology even found that pet owners had greater self-esteem, were more physically fit, and were less lonely and fearful than non-pet owners.

So, we know that owning a dog can possibly help you find love. Here are 3 ways that your dog can actually help you improve your relationship.

1. Women In Heterosexual Relationships Are More Satisfied With Their Partner If He Loves Her Dog

According to a 2012 study done by researchers at the University of Houston, a woman will feel more satisfied with her relationship when her partner feels the same way about her pet as she does. As in, if a woman loves her dog, her S.O. better love her dog, as well, if he wants the relationship to work. Researchers sent online questionnaires to 120 cohabitating heterosexual couples and asked them questions such as how close they felt to their pets and the level of happiness they felt in their lives and relationships. It was found that while women wanted their men to match the same level of love towards their pet, men weren’t exactly the same way. If men had a unique bond with their pet, they were happier in their relationship regardless of how the women felt about their pet.

2. Exercising With Your Dog Could Be The Key To Good Sex

In research done at the University of Missouri, it was found that people who exercised with their dogs were more likely to stick with their workout routines. Additionally, runners found that bringing their dogs along helped them focus less on things like running time and the calories they burned, and put their attention on how much they enjoyed their workout. And, according to Psychology Today, the sexual experiences of both men and women can be boosted by a little exercise. A 2004 study published in the Electronic Journal of Human Sexuality looked at a sample of 408 undergrads enrolled in a southeastern university to see the relationship between physical exercise and basic human functioning. It was found that those who exercised more reported higher rates of sexual performance and sexual desirability than those who had little to no exercise.

According to Suzanne Phillips, a licensed psychologist who is a contributor for Psych Central’s “Healing Together for Couples,” blog, people get what they give. Phillips believes that the reason behind all these studies showing that pet lovers are much happier and have better moods is that they’re giving out positive unconditional love to their pets. She says we can better improve our relationships with our human partners by looking at how we treat our pets. For example, we can learn to be better with our greetings. When people come home and greet their dogs, it’s usually with some kind of happy, animated display of physical affection. Sometimes partners don’t even get that kind of loving greeting. Additionally, we don’t usually hold grudges when our dogs completely trash our house. We usually get mad and then get over it the next day. How many times can we say that about fights with our partners? Finally, there’s acceptance. We accept our dogs just the way they are, no matter how much we absolutely hate it when they jump around and lick random strangers on the street. Why can’t we just accept our partners for who exactly they are, crazy little flaws and all? Overall, maybe people should start treating their partners better than they treat their dogs. If they’re not doing so already.

More like this
The Best Time To Date After A Breakup, According To Experts
By Bustle Editors
Virgo & Sagittarius Zodiac Compatibility, According To Astrologers
By Kristine Fellizar
Hinge's New NFAQ Feature Is Demystifying Queer Dating
By Emma Carey
20 Things You Should Never Tolerate In A Relationship
By Rachel Sanoff and Kathleen Ferraro
Get Even More From Bustle — Sign Up For The Newsletter